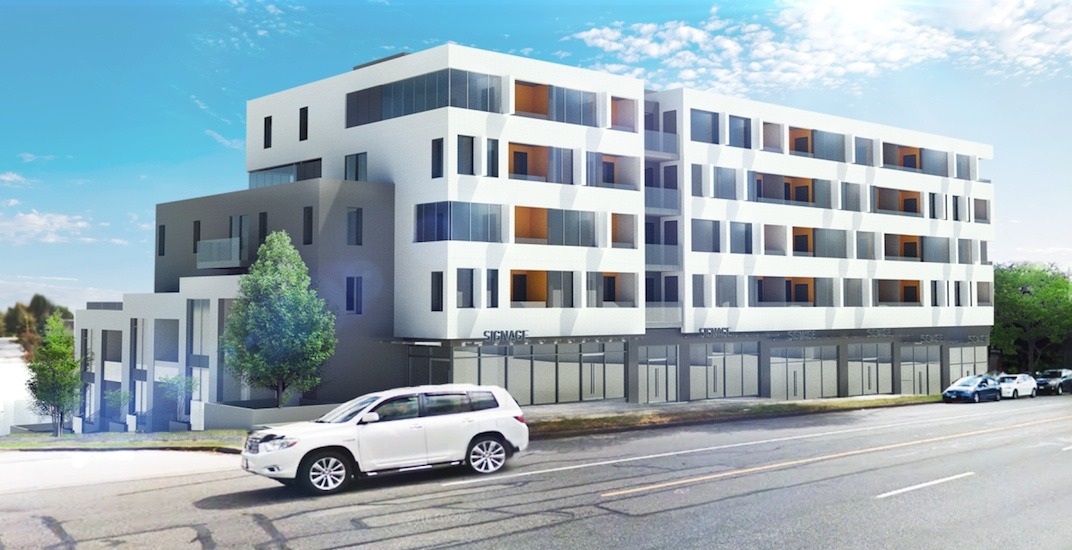 A city-block sized property on the site of six existing single-family homes at 796 Renfrew Street could be redeveloped into a five-storey mixed-use building designed to Passive House environmental standards.

The land assembled lot, located in an area that is predominantly single-family housing, is about three blocks south of the PNE and framed by Renfrew Street to the west, East Georgia Street to the north, a laneway to the east, and Adanac Street to the south. There is also a one-block stretch of small businesses immediately south of the property.

The rezoning application to the City of Vancouver was submitted by GBL Architects, and it proposes constructing 77 secured market rental residential units and about 7,900 sq. ft. of commercial space.

Most of the housing will be located within the upper floors, with the exception of 10 units as townhouses facing East Georgia Street and the laneway. The remaining unit mix is 56 one-bedroom units, nine two-bedroom units, and two three-bedroom units.

A total of seven retail and restaurant units will front the building along Renfrew Street’s ground plain.

There will be 81 underground parking spaces accessed from the laneway for both the residents and businesses.

The building’s rear along the laneway is strategically stepped and articulated to provide a transition to the adjacent single-family homes. This stepped form also follows the property’s steep slope towards the laneway.

Following the City’s recently updated Green Buildings Policy for Rezoning, the building will be constructed to Passive House standards, with green design elements such as rooftop urban agriculture, high-efficiency insulation, solar shading, a heat pump and recovery ventilator for the commercial spaces, and air recirculation efficiencies.