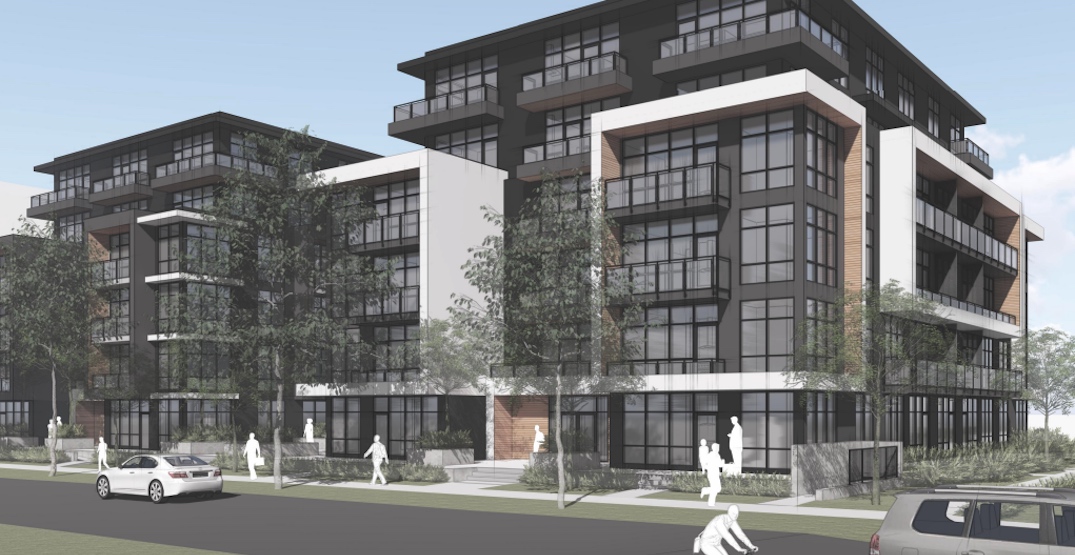 Integra Architecture has submitted a rezoning application for 5889-5661 Baillie Street, located about seven-minutes walking distance from SkyTrain Oakridge-41st Avenue Station and the R4 UBC/Joyce-Collingwood Station RapidBus stops. The new Oakridge Centre is of course also nearby.

Both new four-storey buildings would have a combined total of 120 secured market rental homes, with a unit mix of 48 studios, 28 one-bedroom units, and 44 two-bedroom units.

Each building will have its own separate 900 sq ft ground-level indoor amenity room, situated next to the courtyard that divides the buildings. 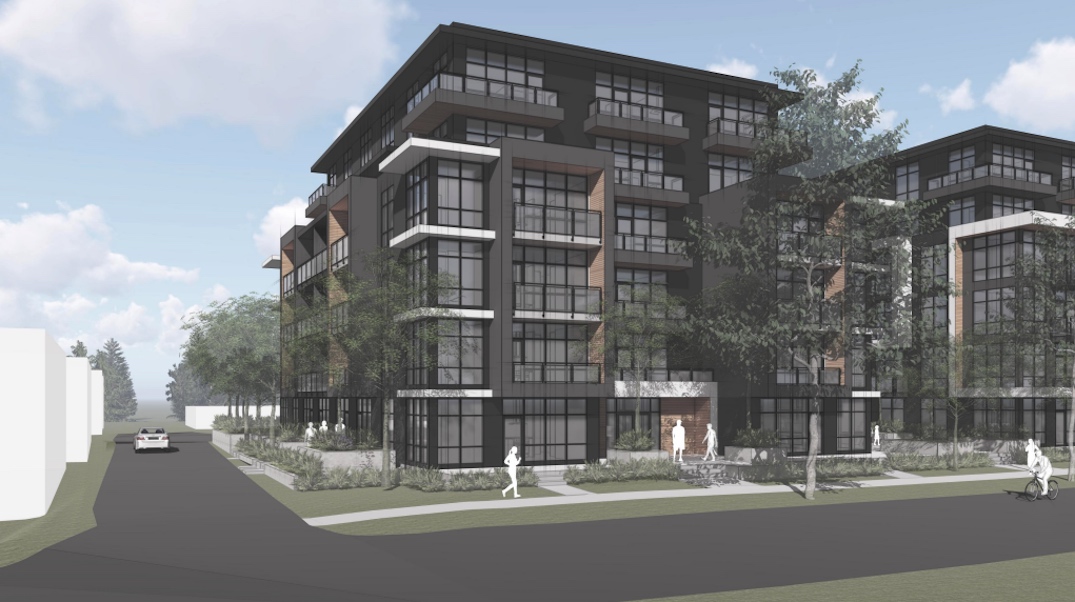 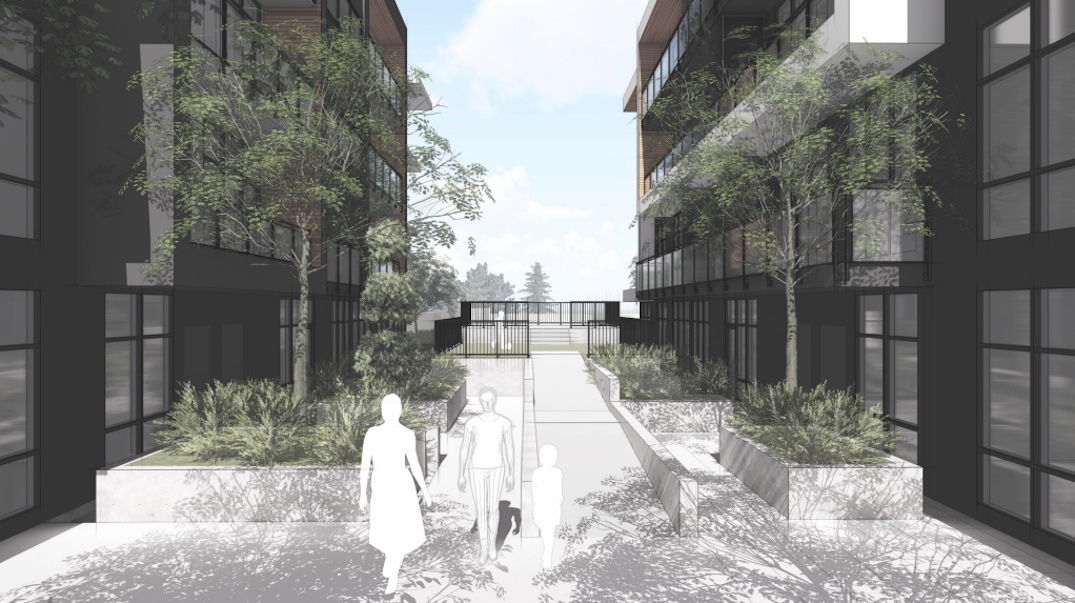 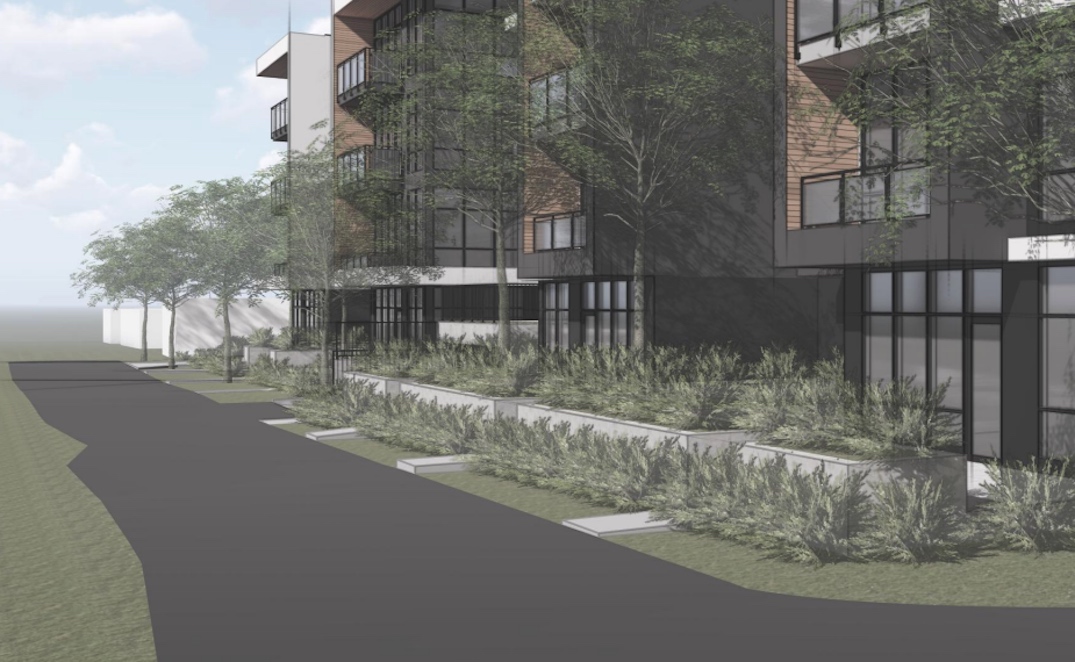 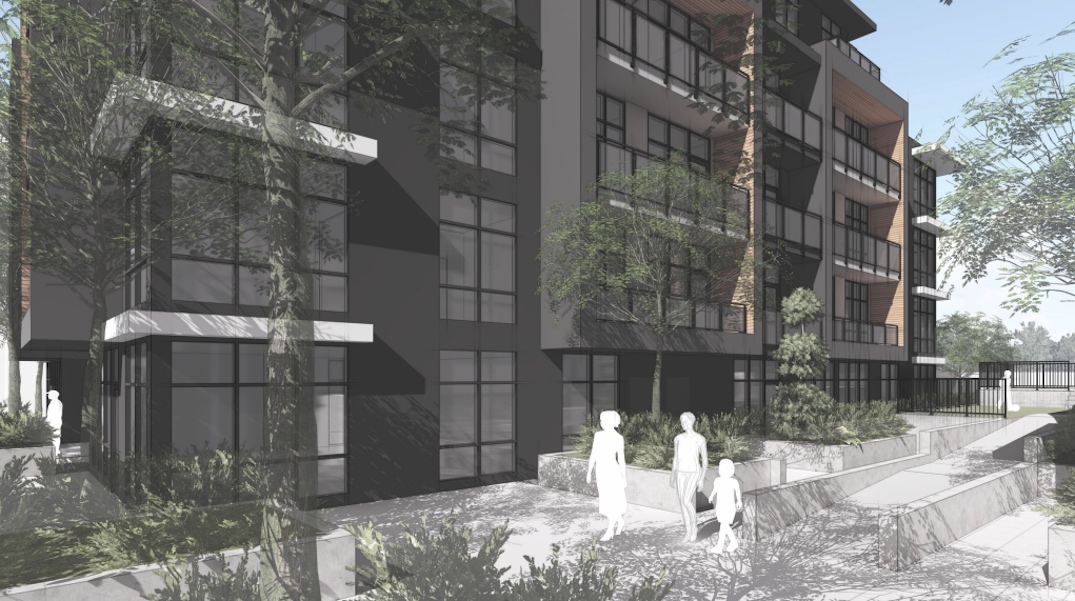 The combined total floor area of both buildings is 74,653 sq ft, for a floor area ratio (FAR) density of a floor area that is 2.5 times larger than the size of the lot. Under the city’s Cambie Corridor Plan (CCP), the site is restricted to a density level no more than 2.5 FAR, with height restrictions stipulated at four storeys for strata uses and six storeys for rental uses. 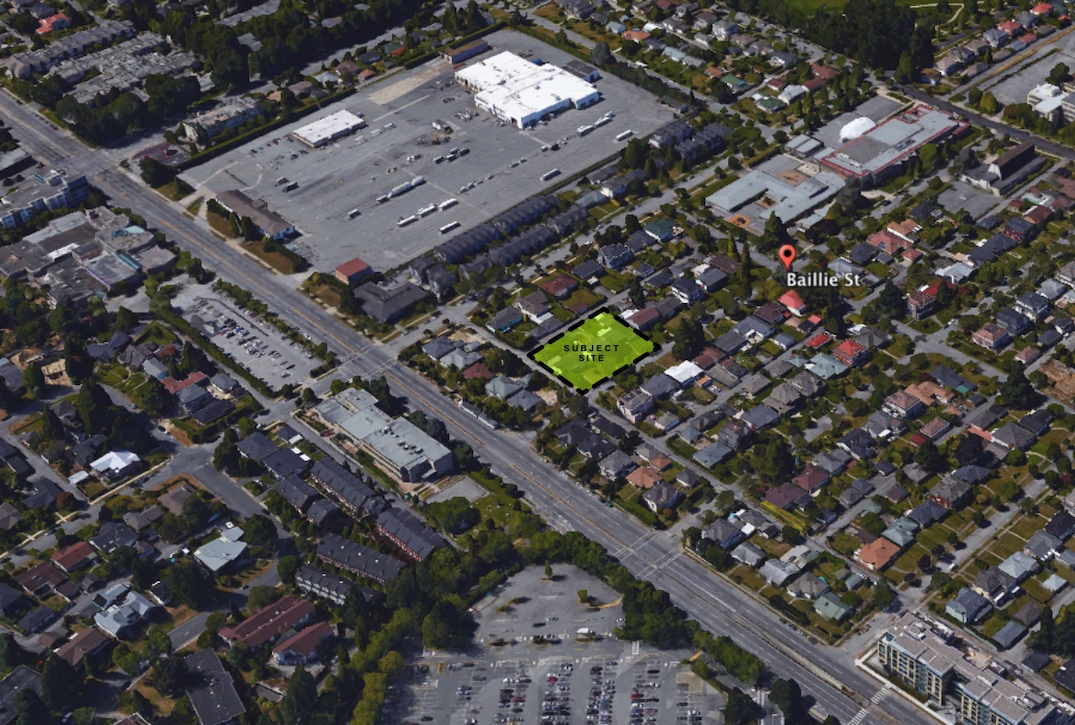 Immediately to the south at the northwest corner of the intersection of West 41st Avenue and Baillie Street, the recently completed Aperture complex consists of 78 condominium homes within two six-storey buildings. Aperture was approved and completed prior to the finalization of the CCP.

Just to the west, there is a rezoning proposal to redevelop 809 West 41st Avenue — Oakmount Medical Centre at the northwest corner of West 41st Avenue and Willow Street — into an 18-storey tower with 131 market rental homes.

And a block west of 5889-5661 Baillie Street, TransLink’s former 14-acre Oakridge bus depot will be redeveloped into a new neighbourhood with over 1,600 homes in 17 buildings up to 26 storeys — matching the residential tower heights of the future Vancouver Jewish Community Centre redevelopment across the street. City council approved the rezoning for the bus depot redevelopment in late 2020. 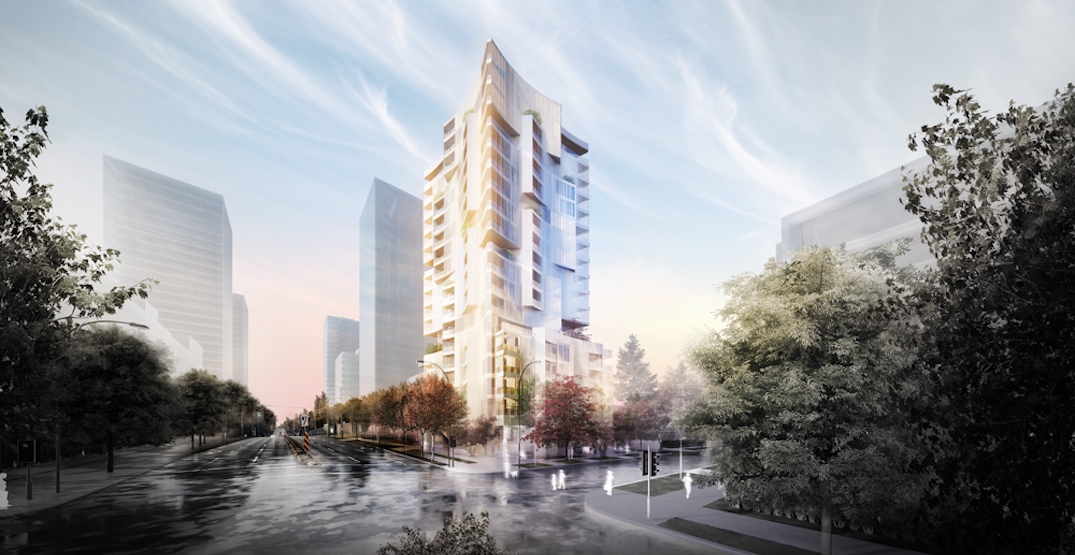 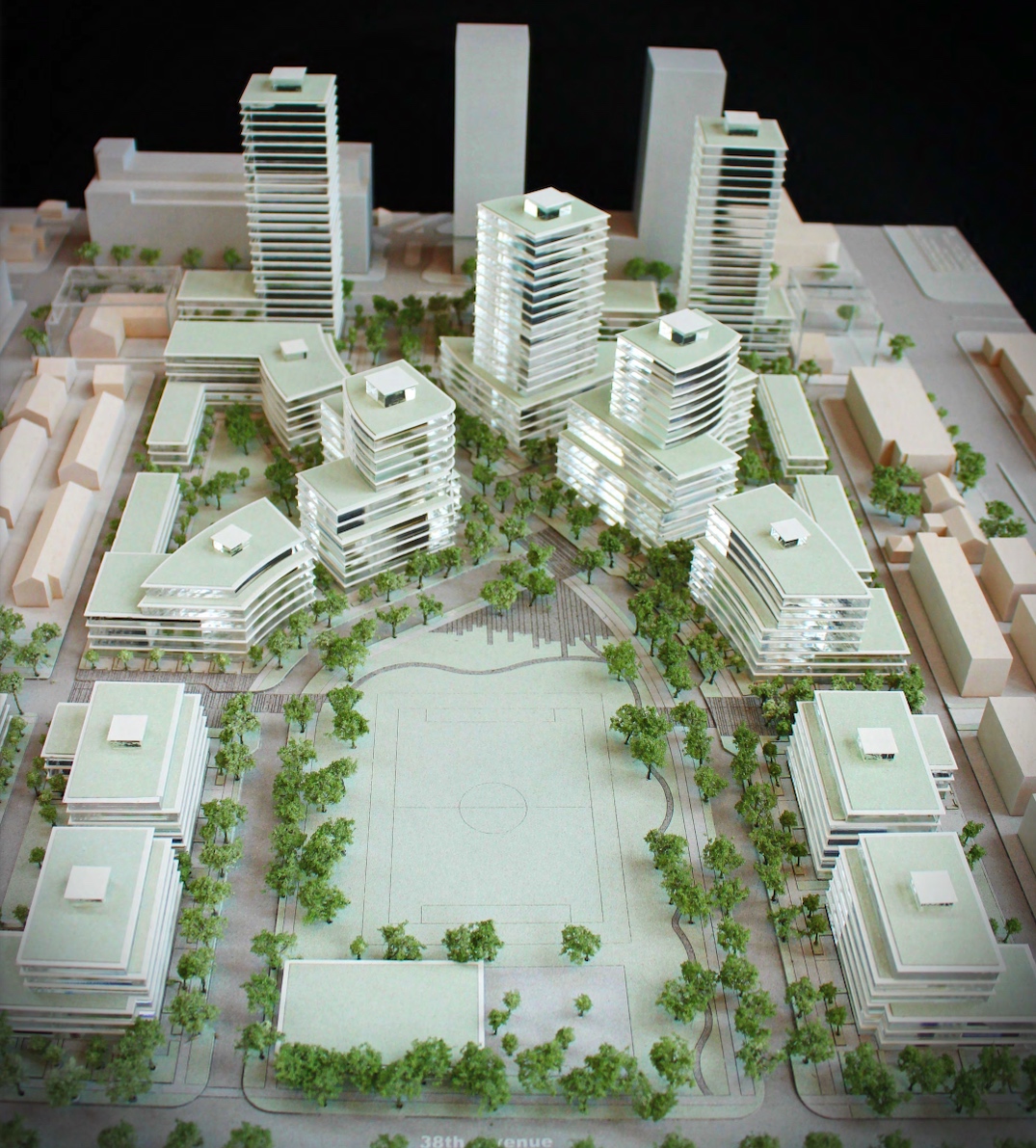