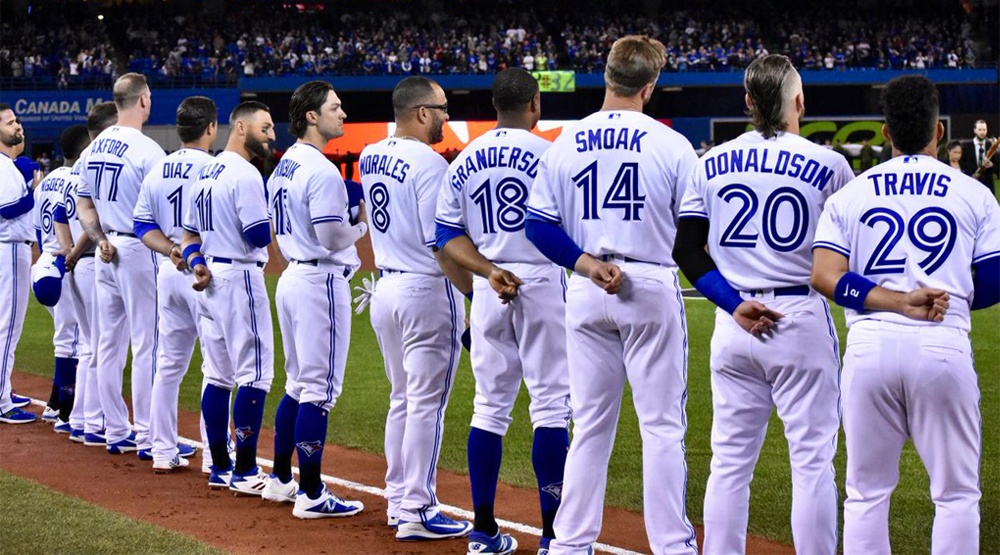 Opening Day is the most exciting and highly-anticipated day of the year for baseball fans. For the Toronto Blue Jays, that excitement was short-lived as their very first game of the season quickly fell with a thud.

The Blue Jays lost their season opener 6-1 at the hand of the New York Yankees. It made for the Jays’ seventh consecutive home opener loss; they haven’t opened the season at home with a win since 2011. Eighth time’s a charm, maybe?

The game itself wasn’t all that exciting, but a pre-game ceremony for Roy Halladay highlighted what was otherwise a forgettable game for the Blue Jays.

Gibbons said Donaldson's arm feels "dead" as in a dead arm. Doesn't believe he's injured. "Not a big deal, it's just dead." Which might be a candidate for quote of the year. #BlueJays

One of the biggest concerns arising from the Blue Jays’ season opener was the status of their All-Star third baseman, Josh Donaldson. He had trouble making routine throws to first base, which pulled first baseman Justin Smoak off the bag multiple times.

Following the game, Blue Jays manager John Gibbons told reporters “his arm kind of feels dead, but not injured”, which sounds much worse than it actually is. Donaldson battled shoulder issues throughout Spring Training and this latest development may have been brought on by his nagging shoulder. A “dead arm” is common in baseball, but for Donaldson to be suffering from this injury Opening Day is a little concerning for the Blue Jays.

Donaldson can still hit, slide and make plays in the field, but throwing seems to aggravate it. So for the time being, don’t be surprised if Yangervis Solarte takes over at third base and Donaldson either gets relegated to designated hitter or takes a few days off.

2. Giancarlo Stanton is the real deal

Giancarlo Stanton might just be the hitter the Blue Jays fear the most for many years to come. The Yankees made the splash of the offseason by acquiring the longtime Marlins slugger, and he went yard in his very first at-bat in a Yankees uniform.

Stanton hit his second home run of the game, a 434 tape measure shot to dead centre field. It may have only been one game, but for anyone who thought the Yankees’ slugger may have trouble hitting American League pitching, those critics were silenced with two swings of the bat.

The Yankees’ middle of the order comprising of Aaron Judge, Stanton and Sanchez may be one of the most powerful in the Amercian League. Pitching through the meat of their batting order will be no small task.

3. Two hits, that’s it for the Blue Jays

Two hits, that’s it. The entire Blue Jays’ lineup mustered a total of two hits against the Yankees. It was a rather pathetic showing at the plate for the Blue Jays as a total of five balls left the infield the entire game.

The Yankees’ Luis Severino had the Blue Jays eating out of his hand, striking out seven batters over five-and-two-third-innings. Aside from Kevin Pillar’s home run and Randal Grichuk’s fly ball to the outfield, the team didn’t strike the ball very hard the entire game.

One game is an extremely small sample size, but an anaemic lineup like that won’t play in the American League East.

Prior to the game, the Blue Jays honoured the late Roy Halladay by officially retiring his number and including his name on the Rogers Centre Level of Excellence. The ceremony was beautiful and understated, which is probably the way Roy would’ve wanted it.

Halladay’s family was joined by his former teammates as they stood on the field in honour of number 32. Rather than throwing out the first pitch, Halladay’s sons Braden and Ryan placed the ball on the mound his father called home for 12 years.

No one on the Blue Jays will ever wear that number again because there will never be another like Halladay.

5. No Jose Bautista for the first time in nine years

Waking up today…I never realized how difficult today would be. We are rooting for you @BlueJays. Thank you for so many wonderful memories. We love you Canada! #thebautistas pic.twitter.com/x4Aambtiak

During player introductions, there was one name notably absent: Jose Bautista. For the first time in nine years, the slugger’s name wasn’t called as a part of the Blue Jays home opener.

He was a staple in the Blue Jays’ lineup for close to a decade and it was a little odd not seeing him there. It was a bittersweet reminder how many MLB players in their 30’s are still without work to this day.

The Bautista era had to come to an end eventually in Toronto, but no one anticipated how odd it would feel to not have him in the Opening Day lineup.