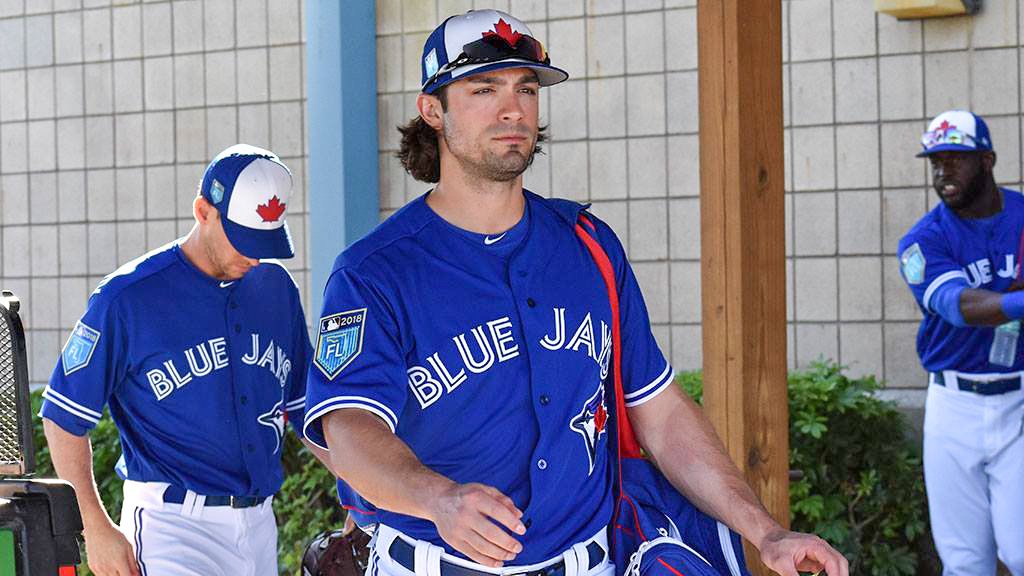 There’s been a changing of the guard on the Toronto Blue Jays’ roster.

A lineup once anchored by franchise figureheads Jose Bautista and Edwin Encarnacion has given way to Josh Donaldson and Justin Smoak.

With Bautista floating out in free agency, reliever Aaron Loup is now the longest-tenured member on the Blue Jays roster. Whether via trades or free agent signings, Toronto welcomes nine new players to the roster this year (note: the Opening Day roster has not yet been finalized).

The front office picked up some infield insurance in the form of Yangervis Solarte and Aledmys Diaz. They filled the corner outfield by acquiring Randal Grichuk from the St. Louis Cardinals and inking veteran outfielder Curtis Granderson.

Lastly, the Blue Jays put the finishing touches on their pitching staff by bringing aboard Jaime Garcia, Seung-hwan Oh, John Axford, and Tyler Clippard. And to fill out the 25th spot on the roster, the Jays picked up veteran infielder Danny “not to be confused with Valencia” Espinosa.

To get you ready for Opening Day, learn a little more about these fresh faces on the Blue Jays roster.

Grand entrance! @cgrand3 is all 😁 in his #BlueJays uni! pic.twitter.com/13WvtrjMaa

You won’t find a better guy in baseball than Curtis Granderson. He’s one of the most beloved players in the game, which in some small way probably convinced the Blue Jays to sign the veteran lefty outfielder.

Granderson still has some pop left in his bat and is especially deadly against right-handed pitching. Since the division is stacked with righty starters, he’ll likely see the bulk of playing time this year in left field for the Blue Jays.

Successful first Photo Day with the squad for @RGrich15! 📸 pic.twitter.com/T65DAk91U3

Last year, the Blue Jays said goodbye to a legend in right field: Jose Bautista. Randal Grichuk has some big shoes to fill out there, but a change of scenery and more playing time could unlock his potential.

Of all the Blue Jays’ new additions ahead of 2018, the acquisition of Grichuk could be their best. He’s a great defender and has some 30-plus home run pop in his bat.

Part one of the Blue Jays’ plan to provide some infield insurance for Troy Tulowitzki and Devon Travis was bringing aboard Aledmys Diaz of the St. Louis Cardinals.

He enjoyed wild success during his rookie campaign in 2016, making the National League All-Star team and finishing fifth in Rookie of the Year voting. However, Diaz experienced a huge sophomore slump in 2017 and only played 79 games in St. Louis.

He’ll likely see the bulk of playing time at shortstop while Tulowitzki remains on the disabled list. Given Tulo’s uncertain status, Diaz projects to play at least two-thirds of the Blue Jays’ games at short in 2018.

In another under-the-radar trade, the Blue Jays traded for Yangervis Solarte from the San Diego Padres in early January. The move was met with a lukewarm response, but Solarte provides an added safety net for the Blue Jays’ middle infield.

He’ll likely bounce around the diamond to fill in at numerous positions throughout the season, whether that’s second base, shortstop, third base or even the outfield.

Oh my, what a debut!

Seung-Hwan Oh is PERFECT in his first #BlueJays outing. pic.twitter.com/zOc3LaSJxO

Seung-Hwan Oh didn’t see much playing time in Spring Training (he was dealing with a work visa issue so he could play in Canada), but that’s been straightened out and he’s ready to go for Opening Day.

The former St. Louis Cardinals closer will make a mere $1.75 million with the Blue Jays with the potential to turn it into a two-year deal with another $2.5 million tacked on for the 2019 season.

Oh struggled in 62 games with the Cardinals last year but he had a phenomenal debut in 2016 where he pitched to a 1.92 ERA in 76 games. He’ll slot in as the setup man to Roberto Osuna, but Oh may pick up more saves this year than most people think.

"I think this rotation is one of the best in baseball. I'm extremely excited to work with those guys & learn from them." – Jaime García pic.twitter.com/xWSG4PmR2Z

What is it with former St. Louis Cardinals? Jaime Garcia makes the fourth former redbird to suit up for the Blue Jays in 2018. He’s the second lefty in the Blue Jays starting rotation to go along with J.A. Happ.

The 31-year-old starter bounced from the Braves to the Twins to the Yankees last year.

"It's special to see this logo everywhere. The #BlueJays are what I grew up with." – @JohnAxford pic.twitter.com/piMem2d5Yw

John Axford is a good ol’ Canadian boy, he makes OSCAR picks and he can throw 97 mile per hour fastballs. What’s not to like? The Port Dover, Ontario native snagged one of the last spots in the Blue Jays bullpen after an impressive spring showing. Axford pitched in eight Spring Training games, struck out 11 batters and gave up one single earned run in eight innings of work.

Tyler Clippard got a late start in Blue Jays camp – he was signed back on March 7th – but much like his cohort in the bullpen Mr. Axford, Clippard looked really good in Spring Training action for the Blue Jays.

We've acquired INF Gift Ngoepe from the Pirates for cash considerations or a player to be named later.

With the injury to Troy Tulowitzki, the Blue Jays need more backup infielders than ever. Although Devon Travis, Aledmys Diaz and Yangervis Solarte are capable middle infield guys, it doesn’t hurt to have one more.

Enter Gift Ngoepe. The 28-year-old infielder was acquired way back in November as a depth move to bolster the Blue Jays’ infield. In a surprising turn of events, Jays manager John Gibbons announced Ngoepe will make the team’s Opening Day roster.

With Tulo’s long-term status up in the air, Ngoepe may stick around a little long than most expected. However, his playing time will likely be very scarce as Ngoepe fills out the roster as a glove-first player. He won’t start very often, but fans will likely see him come in as a late-game defensive replacement.

The 2018 regular season starts Thursday at Rogers Centre against the New York Yankees.