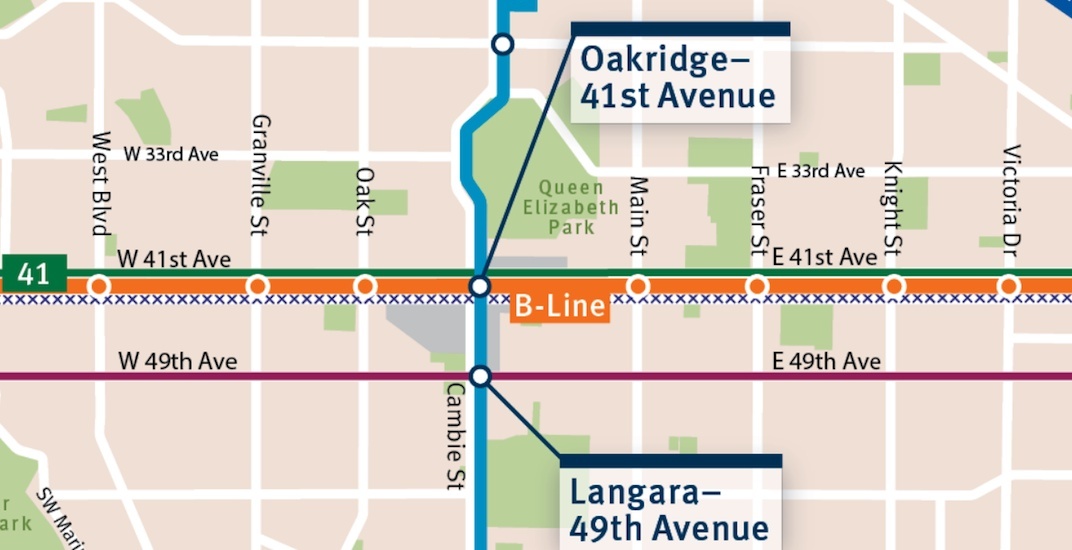 A new B-Line rapid bus service running between the UBC’s Point Grey campus and the Expo Line’s Joyce-Collingwood Station could result in end-to-end travel times of only between 45 and 60 minutes during the busy peak periods.

TransLink says the new 41st Avenue B-Line service, one of four new B-Line routes that will be operational by the end of 2019, will run every three to six minutes during peak hours, every eight minutes during the mid-day, evening, and weekend hours, and every 15 minutes late-night.

The all-door boarding service will operate daily between 6 am and 1 am and offer 33% more capacity compared to existing services on the route to reduce overcrowding.

Like the other new B-Line services, the service will use three-door articulated buses and will have a unique look that immediately identifies the B-Line as a superior service. New special bus shelters will have real-time information screens displaying the arrival times of the next buses and there will be route information inside the buses.

These are the proposed 16 stops for the 19-km-long route, with stops spaced about one kilometre apart: 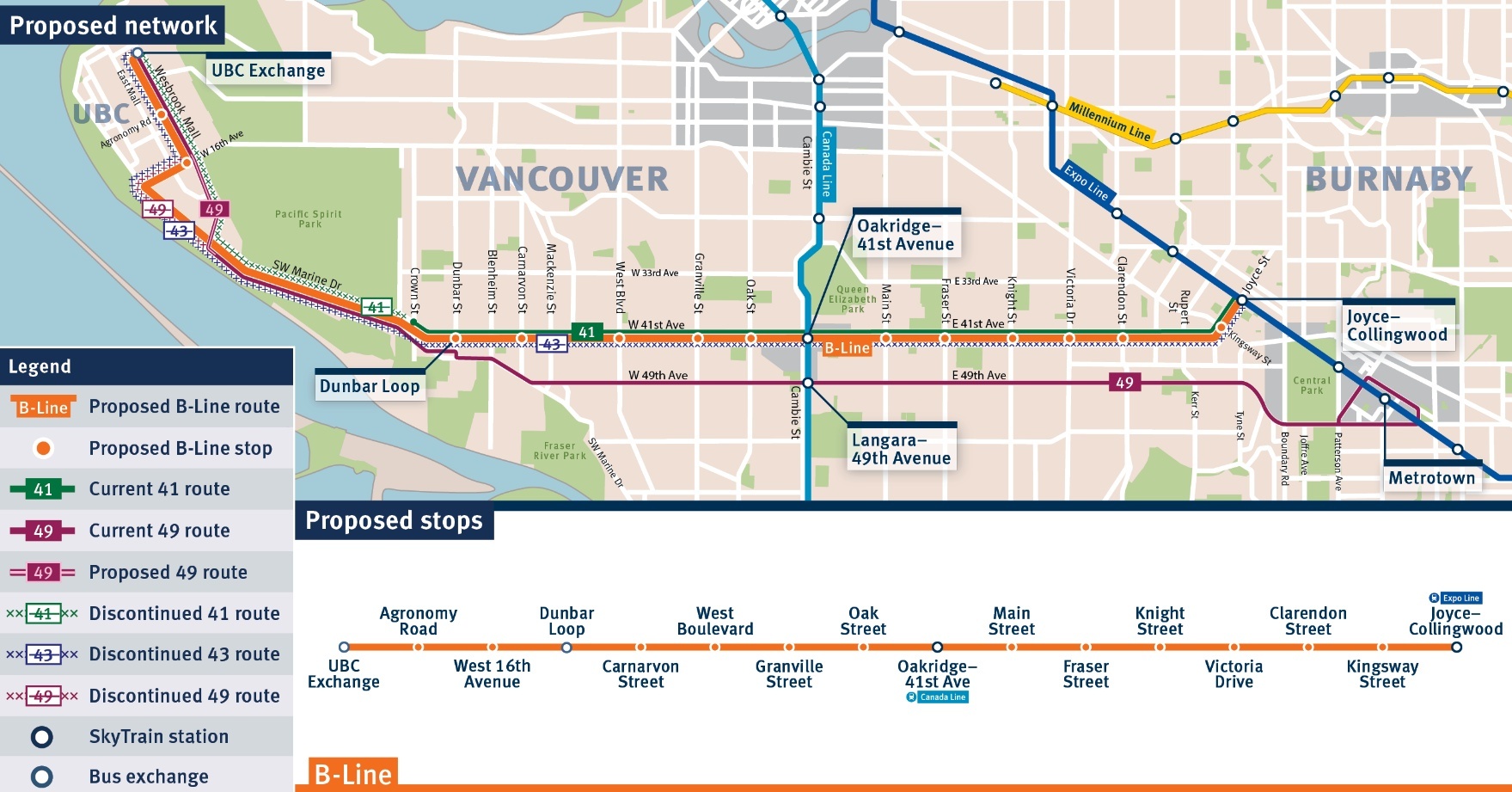 Full map of the 41st Avenue B-Line route in Vancouver, with bus stop locations and changes to existing bus routes along the corridor. Click on the image to enlarge. (TransLink)

Big changes to the existing No. 41 route

There will be major changes to the existing bus routes that serve the corridor as part of the public transit authority’s strategy of optimizing services and reallocating resources towards the creation of the high-capacity B-Line.

The existing No. 43 express route from UBC to Joyce-Collingwood will be cancelled, as the B-Line replicates that route with improvements.

TransLink is also proposing to short-turn the existing, highly-used No. 41 at the Dunbar Loop instead of running it all the way to UBC. It could potentially switch to using the electric trolley buses.

The No. 41 in its existing configuration is the second busiest bus route in the region – just behind the 99 B-Line – with 17.3 million boardings annually.

As well, modest changes are planned for the No. 49, which could be rerouted through UBC Wesbrook Village to retain transit service in the area after the No. 41 is short turned. It would run later to midnight on weekdays to match the current No. 41 schedule.

The public transit authority is evaluating street design change measures with the City of Vancouver that could greatly increase the speed and reliability of the new 41st Avenue B-Line service beyond simply a limited stop bus service. 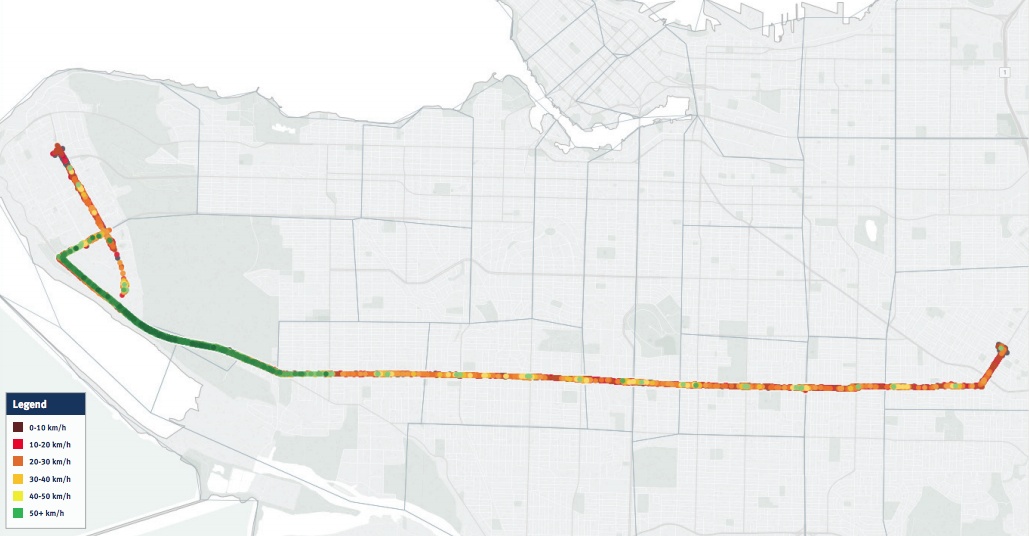 A sample of speed data collected automatically throughout October 2017 during peak times. Current routes 41 and 43. Click on the map to enlarge. (TransLink)

According to TransLink, traffic signal priority for the B-Line buses could have a significant benefit if the prioritization is widespread at most of the major intersections. Buses will have more green lights through a system that matches the signal to the speed of the bus or a system with buses communicating wirelessly with the signals.

Street design changes, such as turn restrictions that reduce the delays by turning cars, queue jumping bus-only lanes at problematic intersections, and the extension of bus stop waiting areas into the street so that buses do not have to re-enter traffic each have a medium level of benefit.

However, the implementation of bus-only lanes – replacing parking or vehicle lanes – would have a very significant benefit. On much of West Broadway east of Arbutus Street, bus-only lanes are already in effect during the peak hours for the 99 B-Line.

Similar street changes are being considered for the corridors of the other three new B-Line routes.