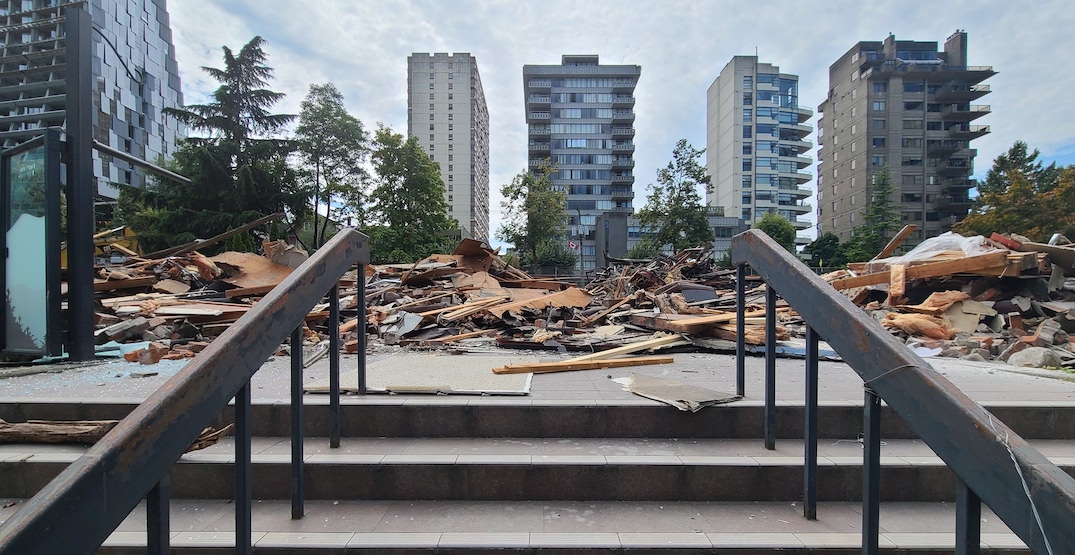 After being a fixture for about 42 years at the gateway location into downtown Vancouver from the Stanley Park Causeway, the former White Spot restaurant building at 1616 West Georgia Street was demolished this past weekend.

It was a head-turning moment for one of the last remaining buildings from a bygone era, now a pile of rubble.

Over the decades, the area around the restaurant’s block was transformed from a railyard to the Coal Harbour neighbourhood, now comprised of public parks and some of Canada’s most expensive residential real estate.

The restaurant permanently closed in late November 2020, which was an inevitably given the planned redevelopment for the site. 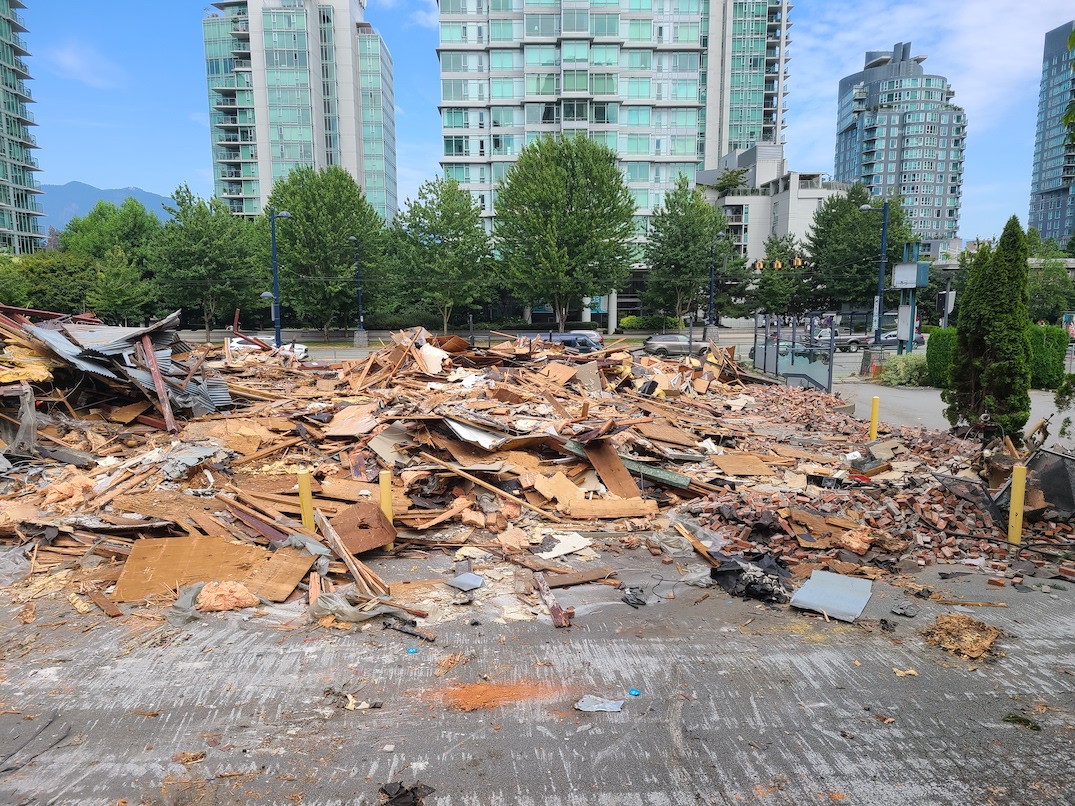 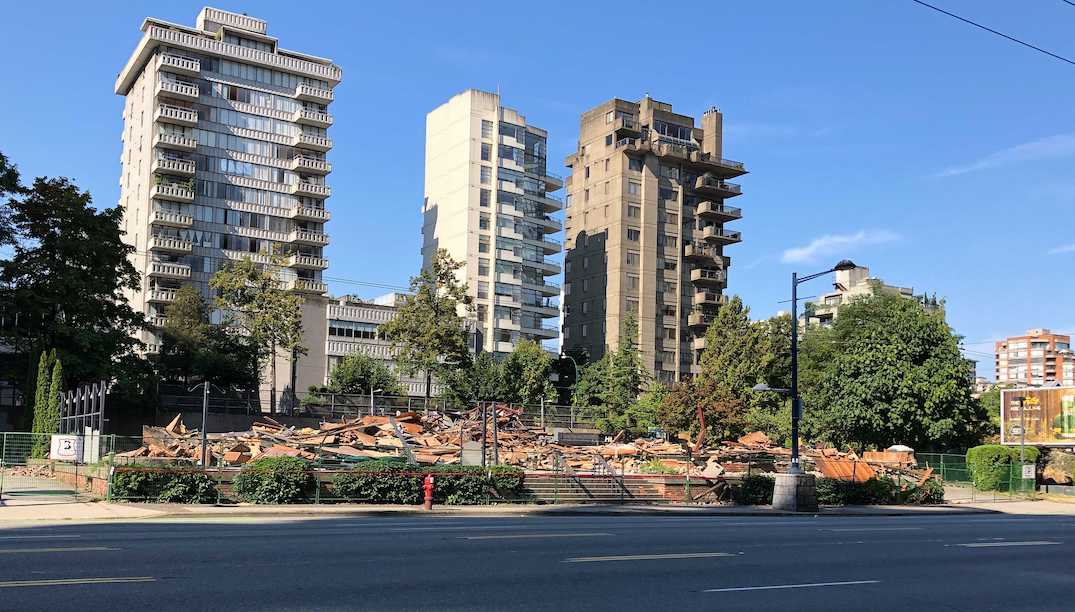 After developing a concept to redevelop the property on their own, BC’s Toigo family, the owner of White Spot and the Vancouver Giants, through Shato Holdings, sold the property to China-based developer Carnival International Holdings in 2017 for $245 million.

In 2019, a rezoning application designed by Pelli Clarke Pelli Architects and IBI Group called for redeveloping the two-third block sized parcel at 1608-1616 West Georgia Street into two residential towers with a height reaching up to 385 ft with 38 storeys.

The proposal calls for 455 luxury condominium homes, which is over 100 more units than the previous concept commissioned by the property’s previous longtime owner.

No commercial spaces are planned for the lower levels of the redevelopment; there will not be a replacement White Spot restaurant. 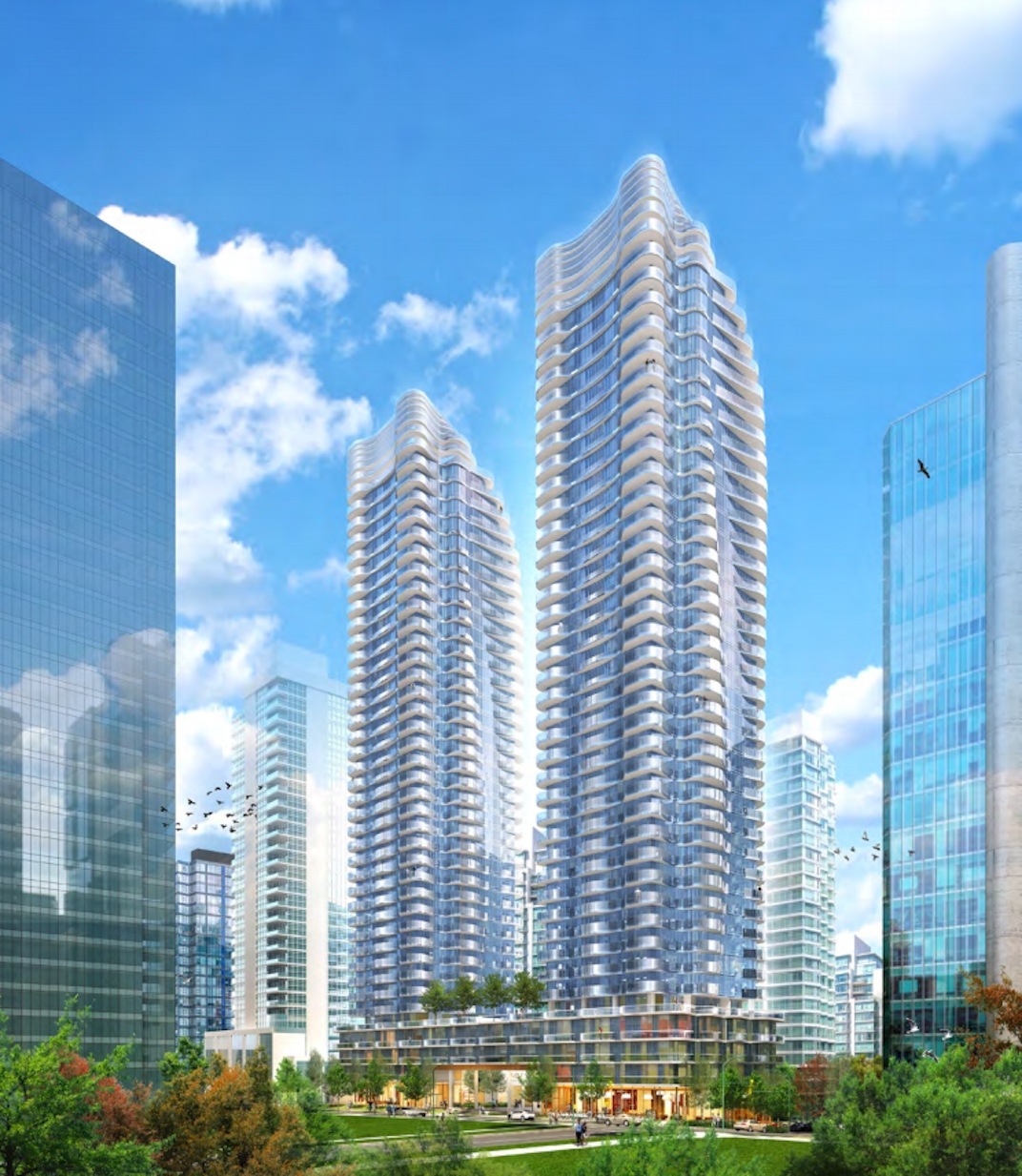 The application is still currently being reviewed by city staff, and has yet to undergo city council’s public hearing process. If approved, the rezoning is expected to generate tens of millions of dollars in community amenity contributions (CACs) towards the city’s West End Community Plan.

Earlier this year, city council approved the rezoning application for the former Chevron gas station site on the western end of the block. Developed by Anthem Properties and designed by Kohn Pedersen Fox and Chris Dikeakos Architects, 1698 West Georgia Street will be redeveloped into a 33-storey tower with 127 luxury condominium homes.

The former gas station site’s allowable height was 385 ft, but city staff forced the project team to reduce their design height by 59 ft to 326 ft — a reduction of about six storeys — to reduce shadowing on Marine Square Park to the north. It is unclear whether the White Spot redevelopment could face similar curtailing to its height due to shadowing considerations by city staff. Anthem Properties will provide the city with cash CACs of $26.1 million. 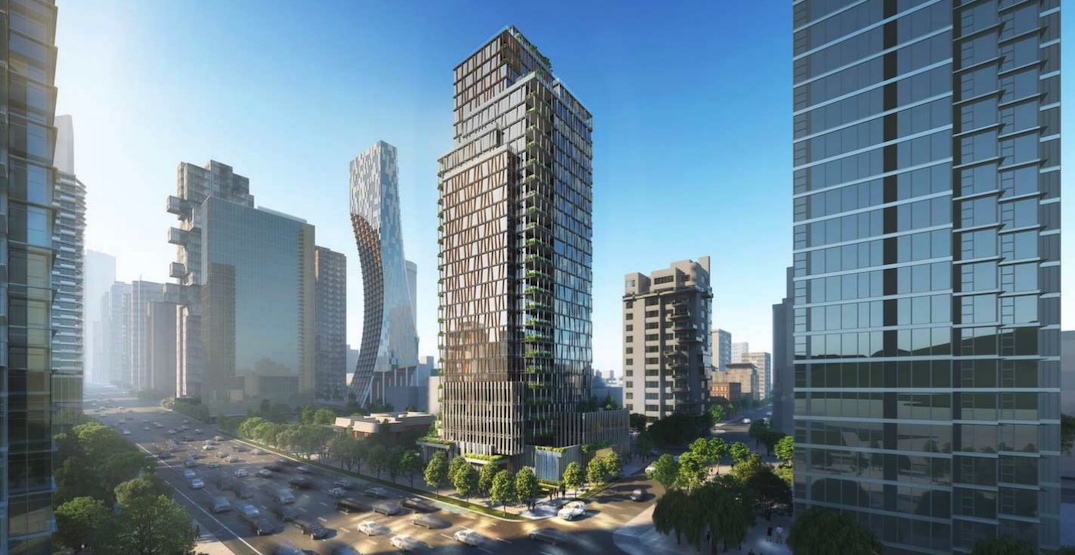 Construction update on Alberni by Kengo Kuma at Cardero. There’s still a few more floor plates to go before it tops out. #vanre #vancre pic.twitter.com/p2nnjFfaID

The area around the former White Spot restaurant, at the border of the West End and Coal Harbour, is becoming a focal point for some of Vancouver’s most unique architectural.

The major starchitect project of Alberni by Kengo Kuma at 1568 Alberni Street — 188 luxury condominiums within a 436-ft-tall, 43-storey tower — is now a few floors away from topping out in its construction process.

The recent upswing in the local condominium market has also led the developer for the Fifteen Fifteen (“Jenga”) tower at 1500 West Georgia Street to set a pre-sale launch date for October 2021. There will be 202 luxury condominiums within the 440-ft-tall, 42-storey tower.

Within the downtown Vancouver peninsula, White Spot locations can be found at 405 Dunsmuir Street, which serves to replace the previous restaurant location in the area where TELUS Garden is currently located, and at 718 Drake Street near the north end of Granville Bridge.