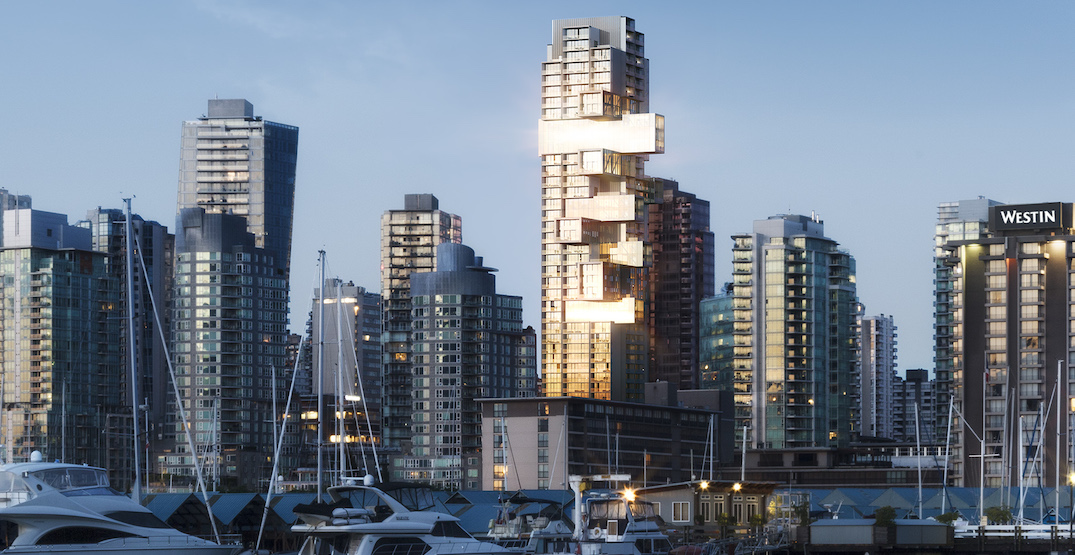 Nearly four years after the “Jenga tower” was approved by the previous Vancouver City Council, the much-anticipated feat of engineering is slated to move forward into its pre-sale stage.

The landmark tower, named “Fifteen Fifteen” after its address of 1515 Alberni Street, right on the border of the Coal Harbour and West End neighbourhoods in downtown Vancouver, will contain 202 upscale condominium homes within its 42 floors.

This is an architecturally significant project not only for its highly unconventional design, but also for its designer, internationally renowned German architect Ole Scheeren. The Vancouver tower is Scheeren’s first North American residential building, and the only one in the world where he has designed both the interiors and exteriors.

A spokesperson for Bosa Properties, which is developing the tower in partnership with Kingswood Properties, told Daily Hive Urbanized that pre-sales will begin October 2021. Construction is scheduled to start in July 2022 for a completion in 2027. 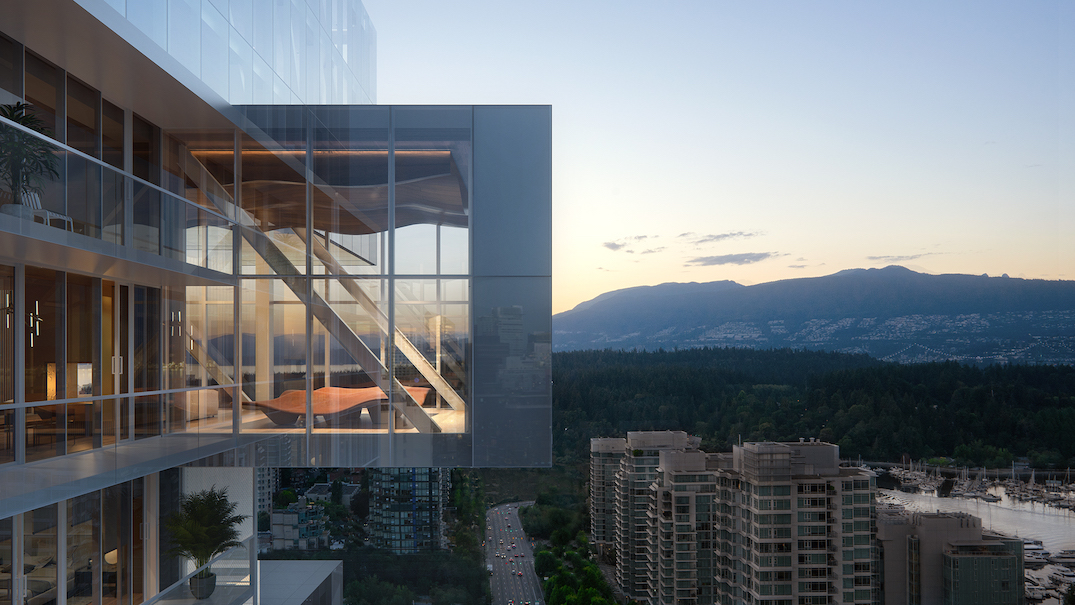 This is the latest sign of significantly improved confidence within the local real estate industry on the demand for condominiums, particularly in downtown Vancouver.

There has not been a successful pre-sale launch for a condominium project in downtown Vancouver over the last four years, a period of downturn first initiated by new government interventions targeting foreign buyers and speculation.

But there now appears to be a resurgence in demand that is buoyed by domestic buyers, supported by record low interest rates, and reduced supply from developers putting their projects on hold awaiting improved market conditions.

This was evident with Reliance Properties’ recent success with its pre-sales for its 2 Burrard Place project — a 35-storey tower with 239 condominium homes. Serving as the canary in the coal mine for the downtown Vancouver market, nearly half the units were sold in just the first two days of launch. 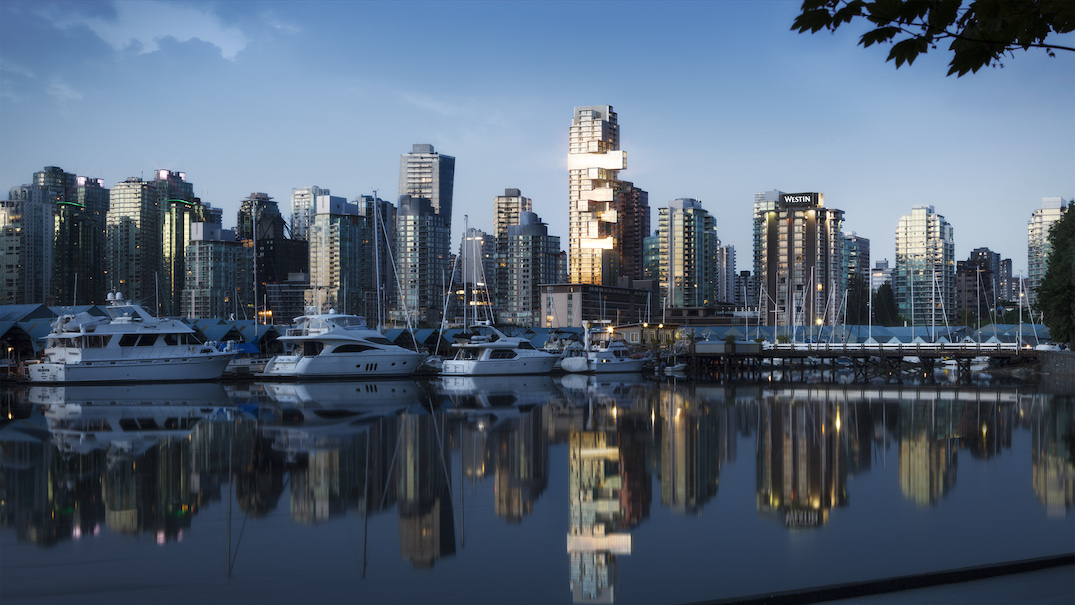 As for Bosa’s Fifteen Fifteen, the homes start at $900,000, and there are 69 different floor plans, including the luxurious offering of 18 cantilevered Observatory Residences and four three-level penthouses.

The Observatory Residences are the units that provide the tower with its most defining visual features — dramatic glass-enclosed cantilevered forms that protrude outward from the tower’s middle and upper sections. With air space beneath the protrusions, these homes will essentially be floating in the sky.

Scheeren’s rationale for these cantilevered protrusions is to “break the verticality of the tower, to project and fold elements out horizontally, and to make a clear connection between the natural environment and one’s personal space.” 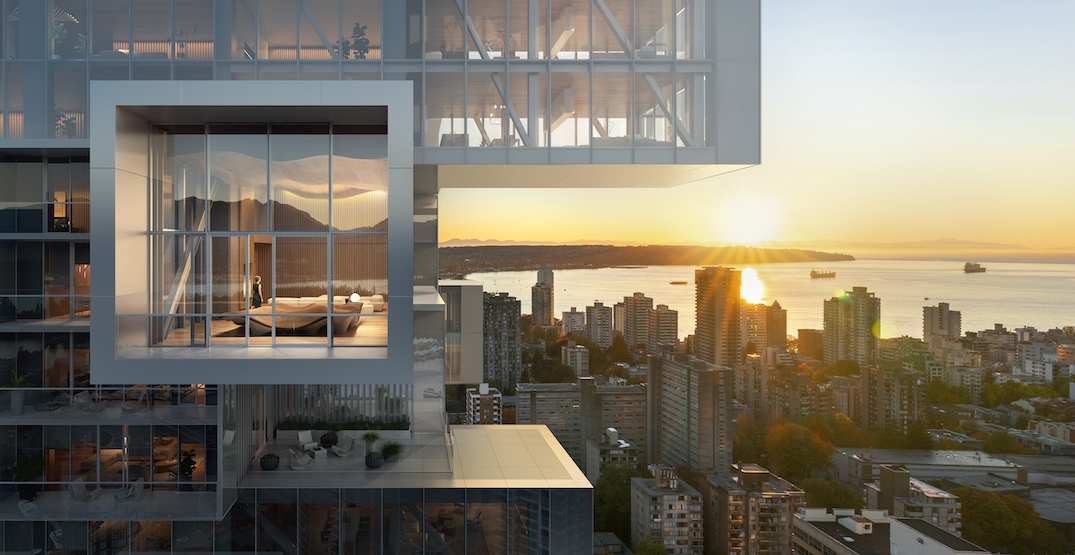 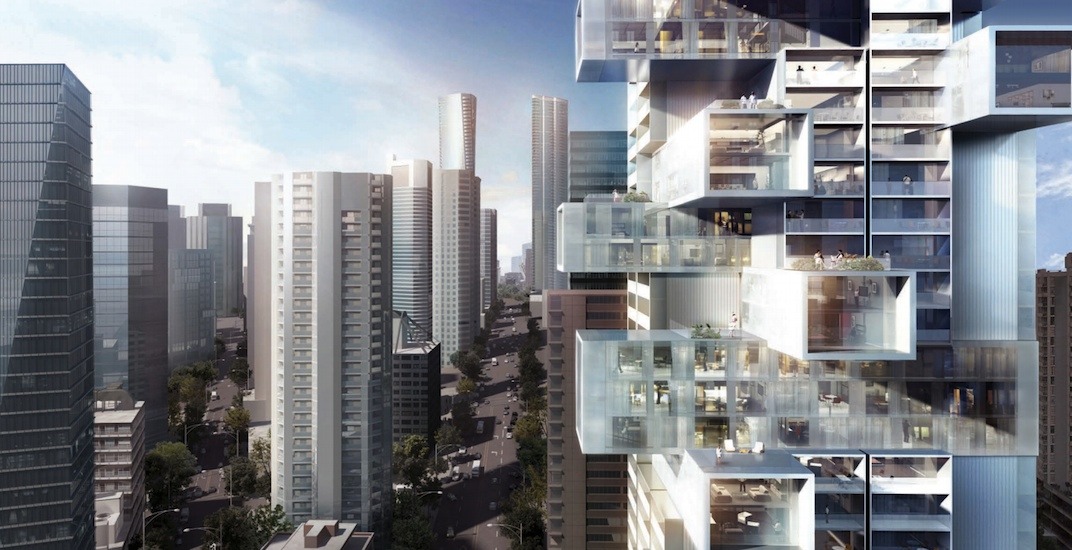 The units range from studios to three-bedroom units with walls of floor-to-ceiling glass, and sliding glass doors opening onto private balconies.

Building residents will have access to hotel-inspired amenities such as the Sky Lounge — a two-storey indoor space spanning the 29th and 30th floors with a 270-degree view of the city, harbour, and mountains — as well as 24-hour auto valet and concierge, and fitness and yoga room with locker and towel service.

Fifteen Fifteen will be built on the eastern end of the Crown Life Place city block. A 43,000 sq ft footprint currently occupied by a pavilion building will be the tower’s site, and the existing 1978-built, 11-storey, Rhone and Iredale-designed triangular office building will remain.

Both new and existing towers will bookend the existing mid-block reflecting pool and water feature, which will be reconfigured and improved.

Fifteen Fifteen is one of about a dozen major upscale architecturally-unique towers in the immediate area that are proposed, approved, or under construction. 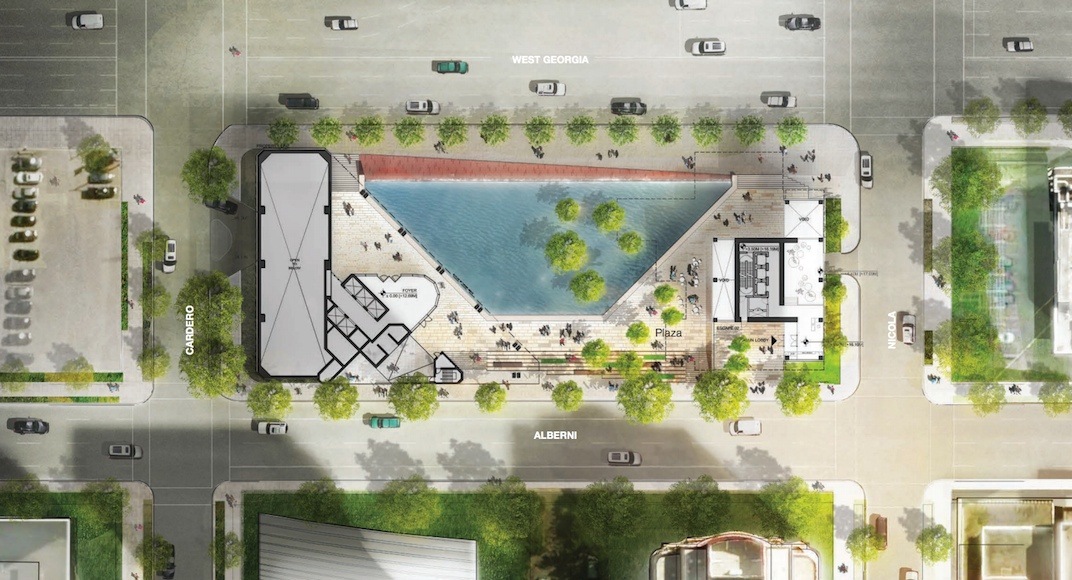 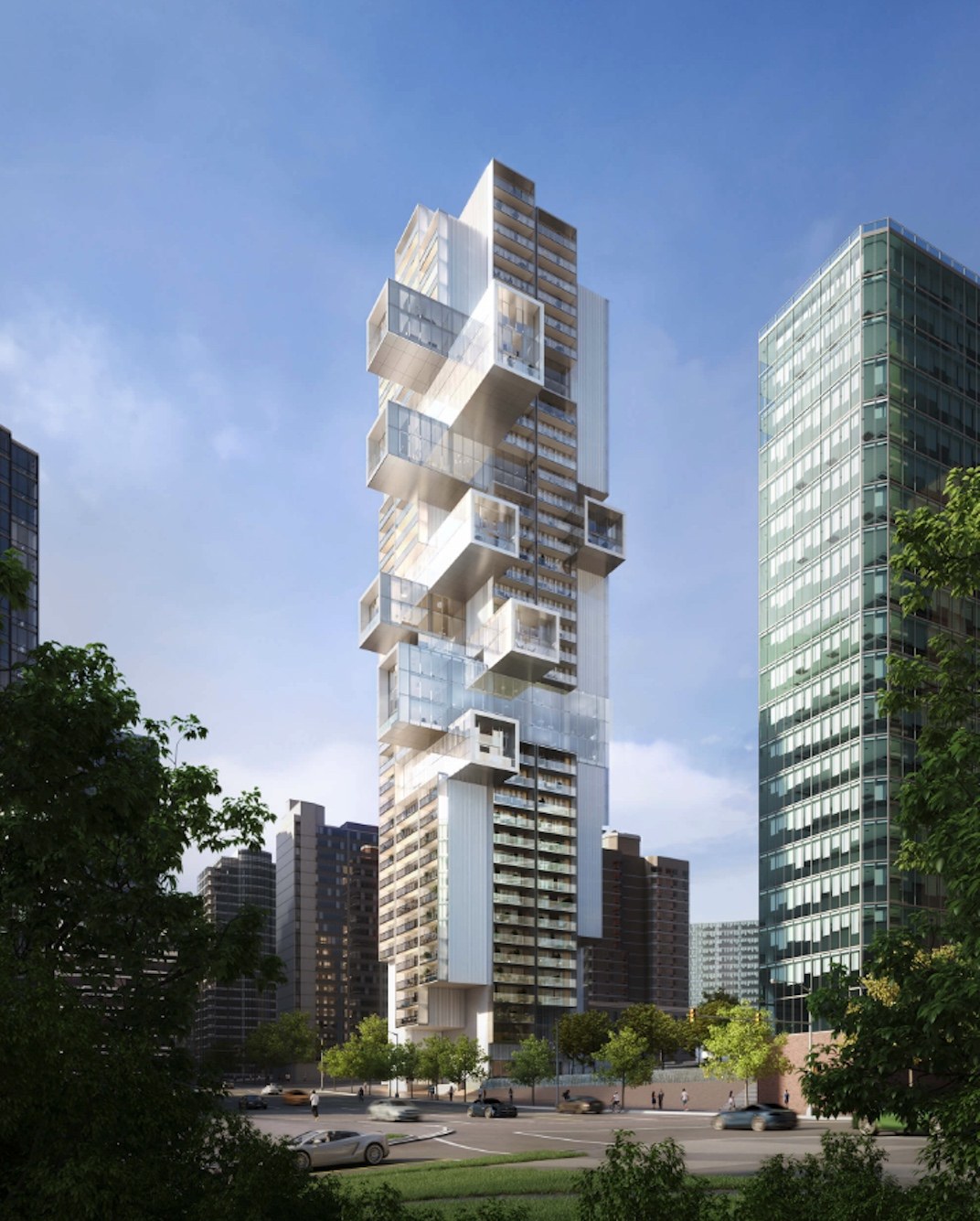 The tower also includes retail space on the ground level, and seven underground levels for over 300 vehicle parking stalls, including the stalls of the existing office building. Altogether, the redevelopment will carry a total floor area of over 258,000 sq ft. A LEED Gold green building certification is targeted.

Scheeren’s offices are located in Beijing, Hong Kong, Berlin, and Bangkok, and some of his firm’s most notable works include The Interlace and Duo in Singapore, CCTV Headquarters in Beijing, and King Power Mahanakhon in Bangkok.

One other future Bosa redevelopment in downtown Vancouver is also designed by Scheeren — 49-storey twin towers at 1070 Barclay Street, near the southeast corner of the intersection of Barclay Street and Thurlow Street. This second project with the architect, also carrying a Jenga-like appearance but with less pronounced protrusions, entailing 481 condominium homes and 162 social housing units, is delayed and still in the application review stage with the municipal government. 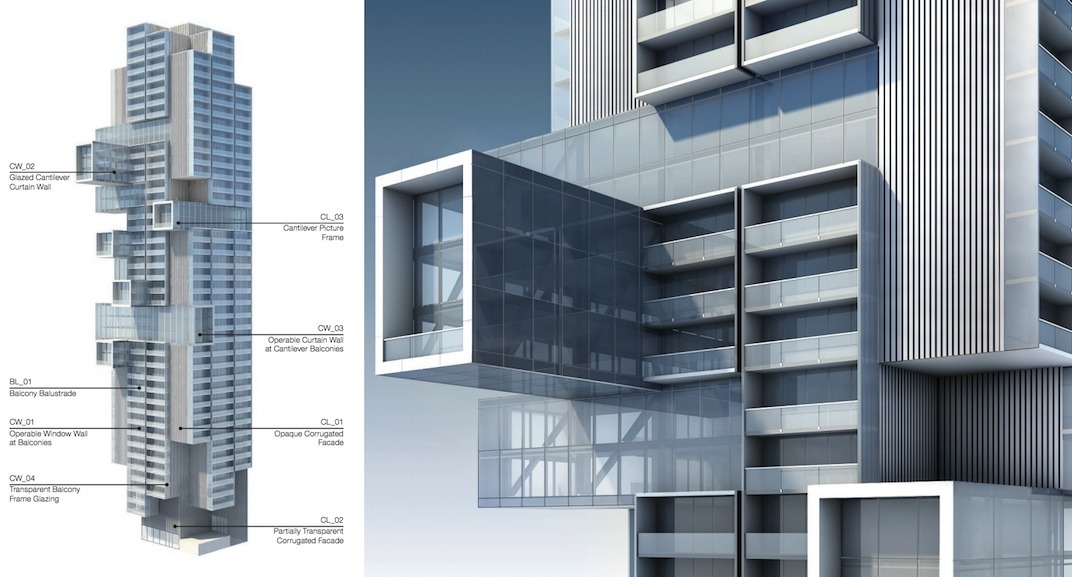 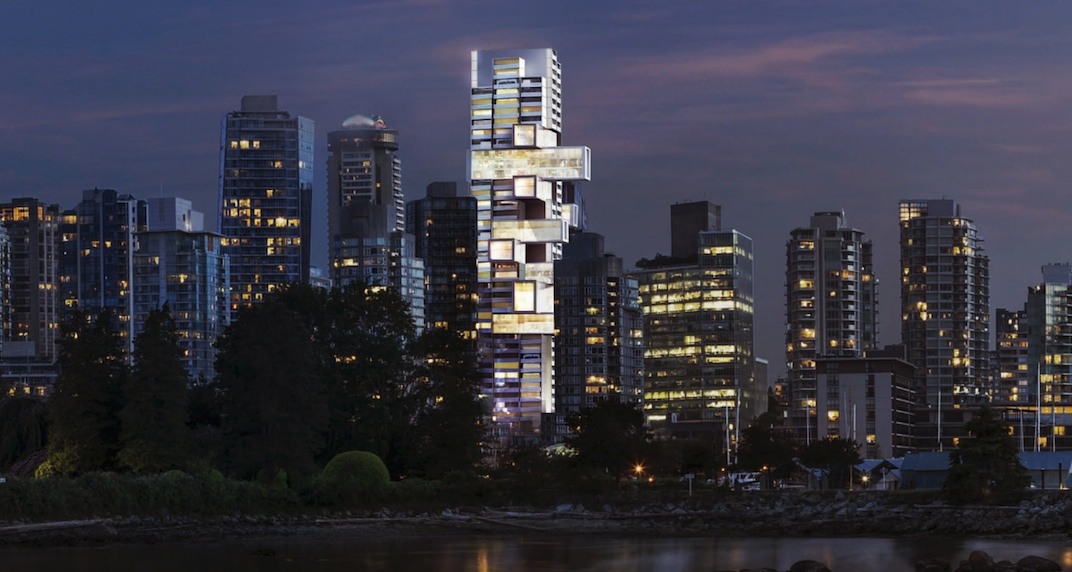 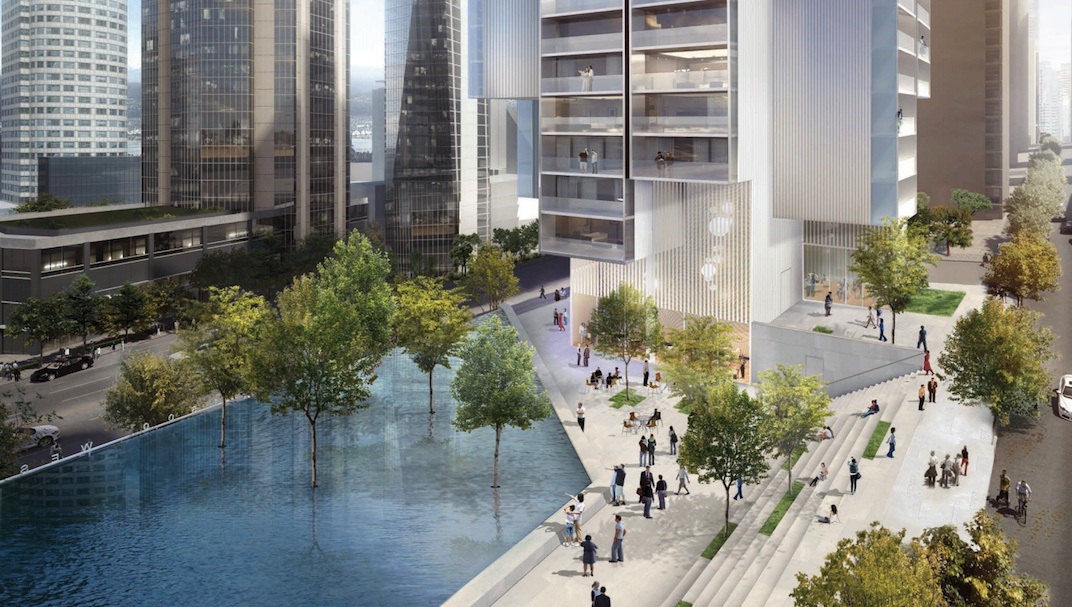