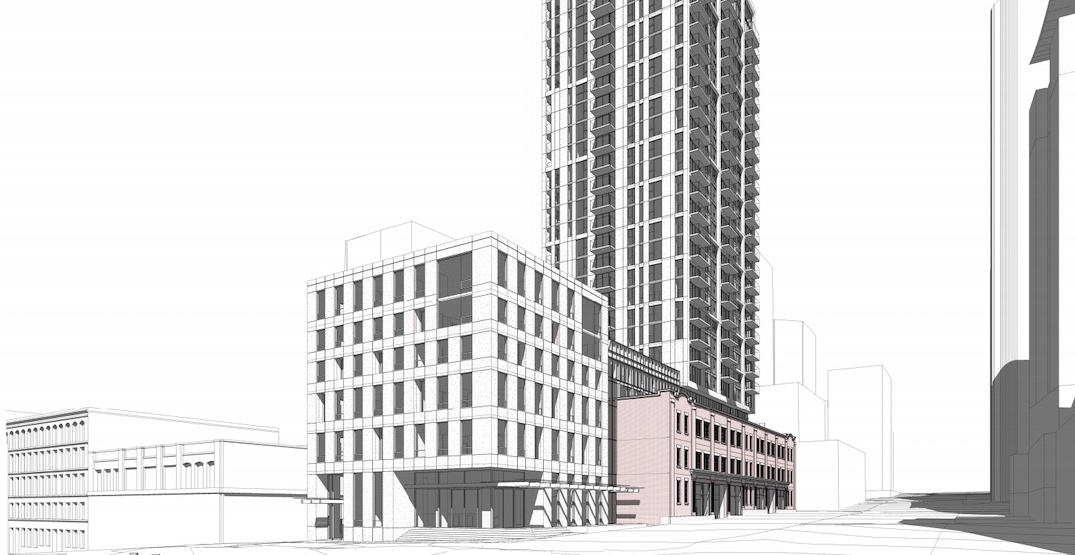 A development application for Amacon’s proposal to turn the Northern Electric Building site into a mixed-use hotel and condominium tower redevelopment shows alterations have been made to the project’s design.

City council approved the rezoning for 150 Robson Street — the southwest corner of Robson Street and Beatty Street, just across from the Terry Fox Plaza entrance into BC Place Stadium — last year, but the latest design has undergone significant changes that streamline and simplify the architectural concept. 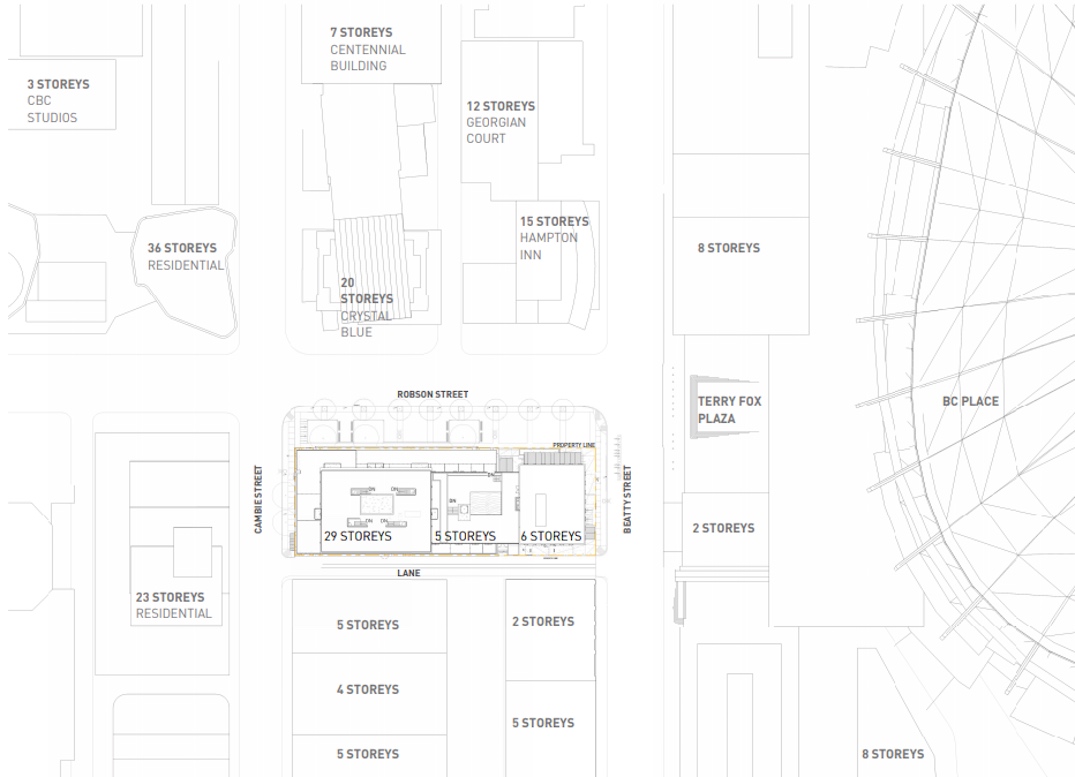 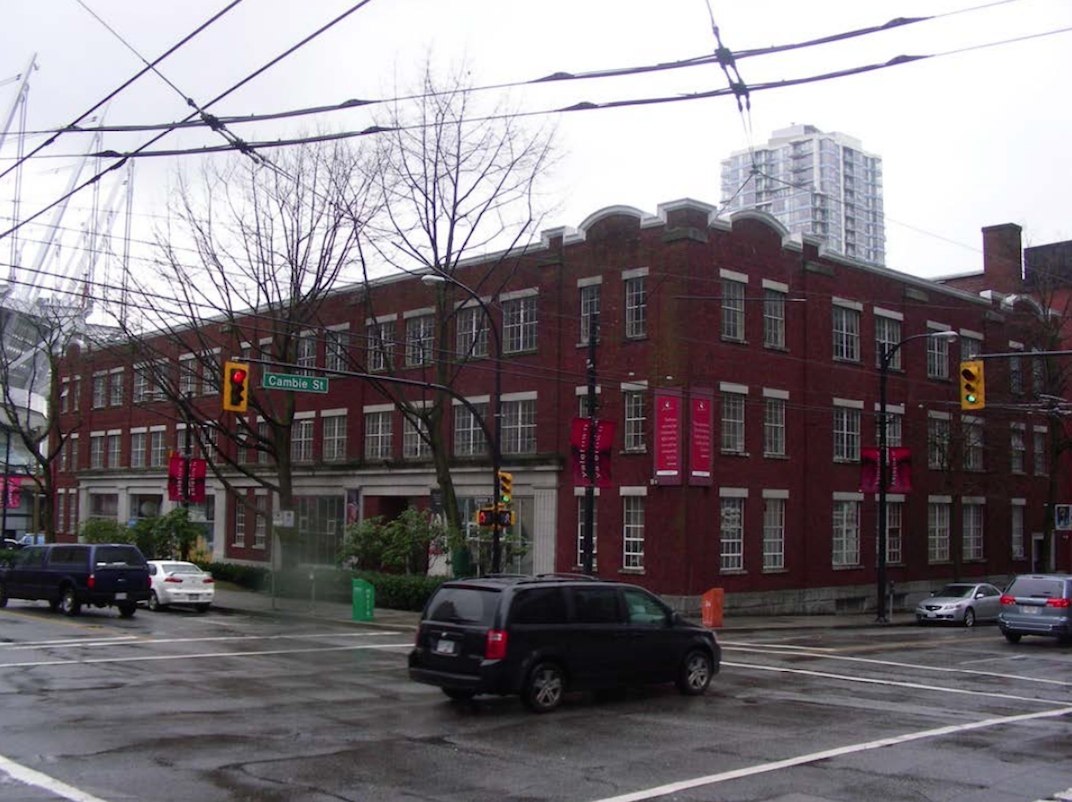 Protruding proportions of both the new hotel podium building and the condominium tower have been eliminated. Glazing is largely broken up by a cementitious panel — a “concrete skin” with an ivory, ferro light colour. 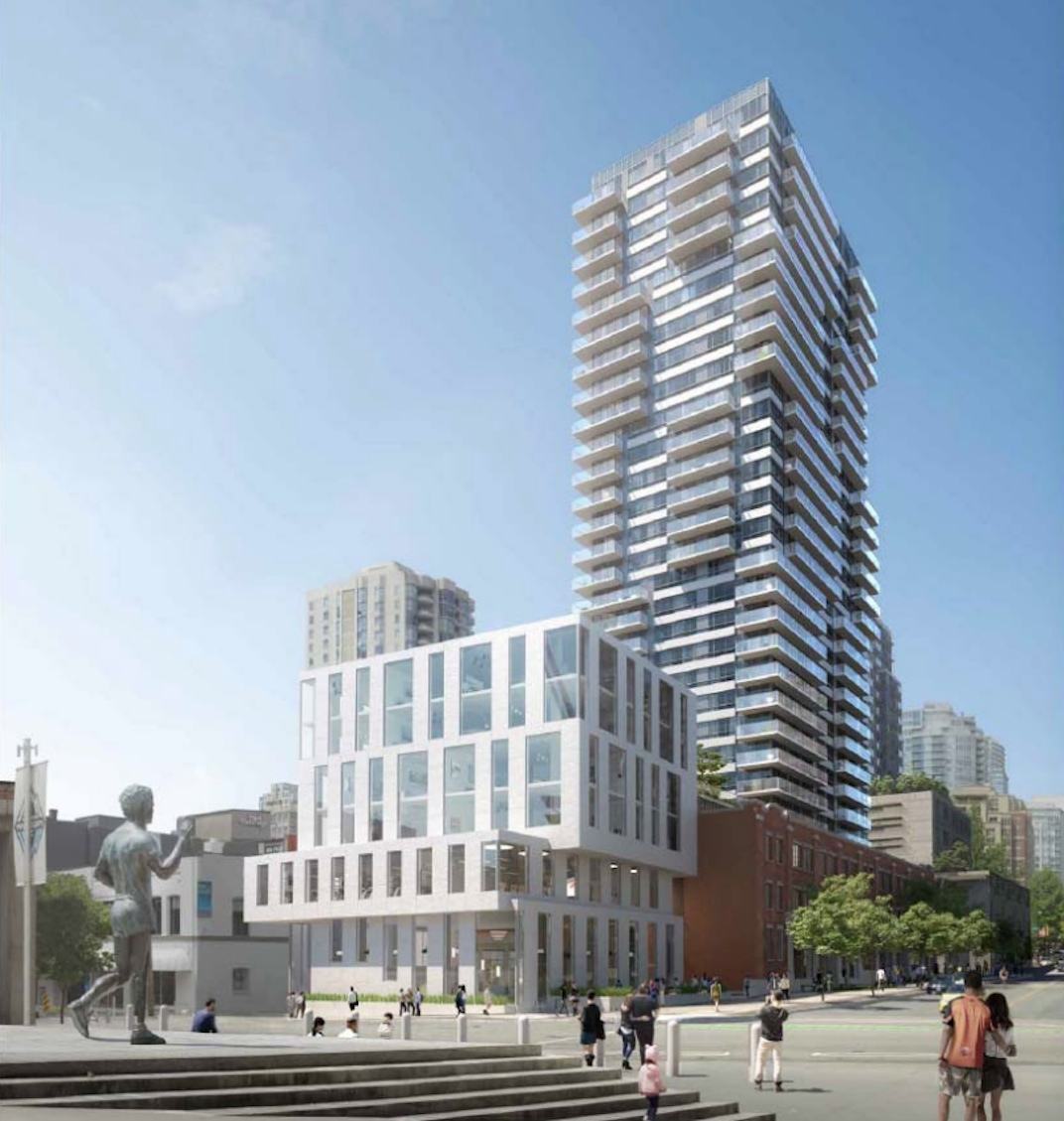 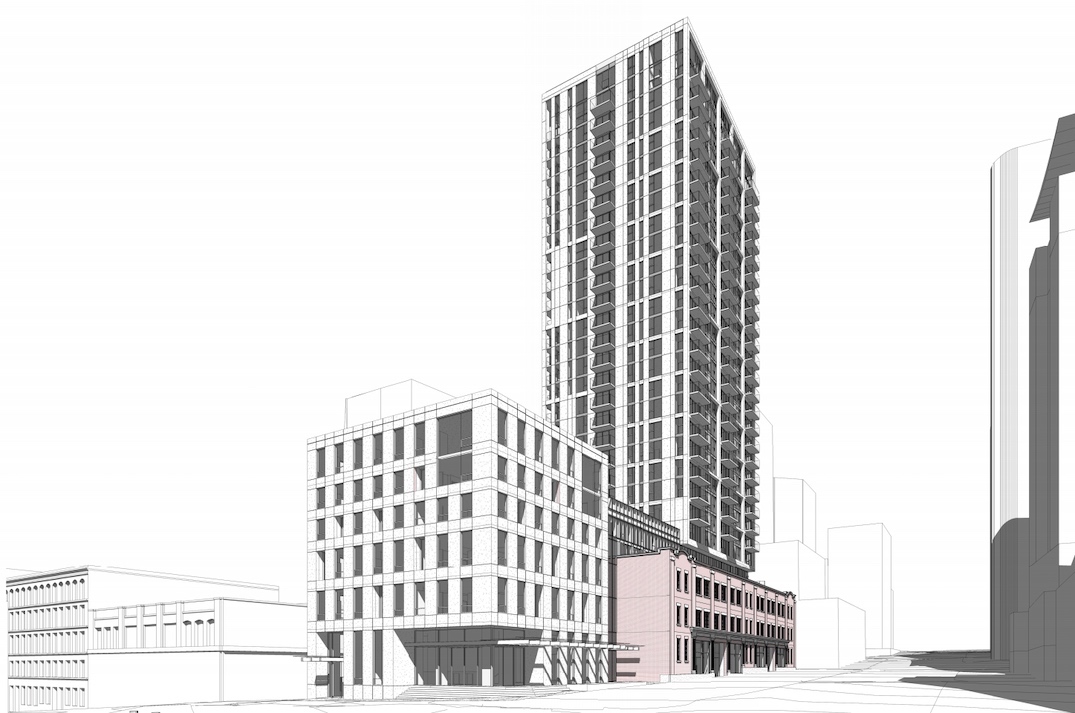 “The proportions of the tower have been manipulated to decrease, within reason, the view impact of the corner unit of the 30 storey tower located on the north-east corner of Robson and Cambie, blocking less than one third of its views,” reads the design rationale by GBL Architects.

“This building is intended to relate to the form and character of the existing buildings along Beatty Street between Robson and Smithe; and at the same time help make the transition to the higher buildings to the north of Robson. It has a monolithic expression and the pattern of its fenestration responds to the scale and proportion of the buildings along that block of Beatty Street, addressing the special characteristics of its particular location.” 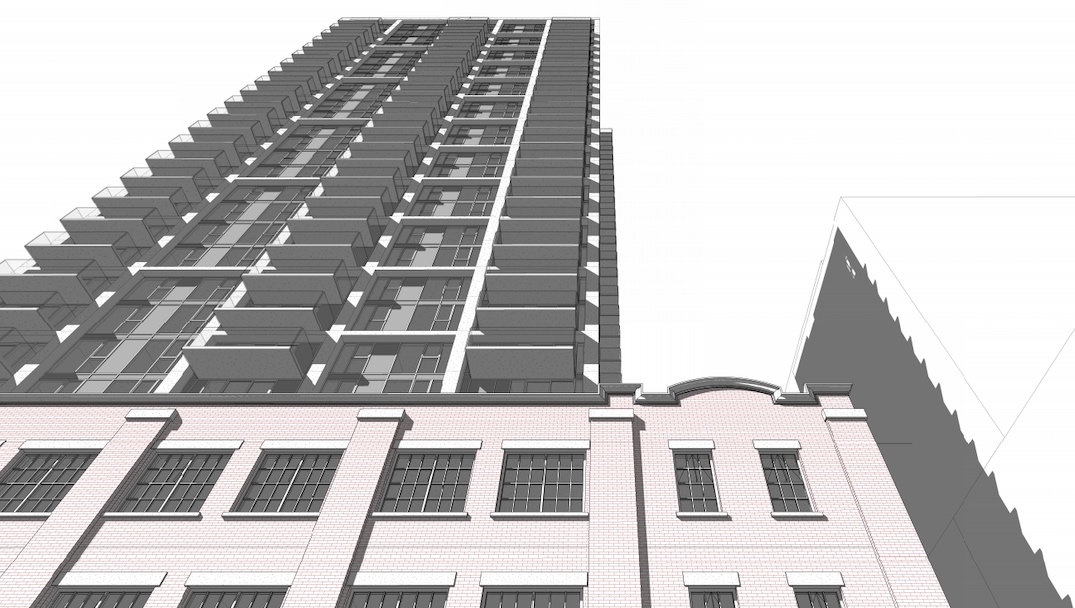 But the overarching concept remains the same, with the facade retained and the interior of the building to be gutted given its “little heritage value.” Hotel rooms will be on the second and third floors, while the hotel restaurant and coffee shop will be on the ground floor fronting Robson Street.

Public realm enhancements — a new corner plaza and the removal of the existing hedge to create a wider setback — along with the new commercial uses will animate this important pedestrian route to the stadium.

The separation between the 1928-built building and the new hotel building will create “a natural entrance” to the hotel lounge from Robson Street.

The height of the new hotel building is limited to just six storeys because of the requirement to decrease the shadow impact across the street over Terry Fox Plaza.

View cones also impact the height of the tower; while the city’s policies allow for a tower of up to 450 ft, view cones limit the building’s height to 290 ft with 29 storeys. 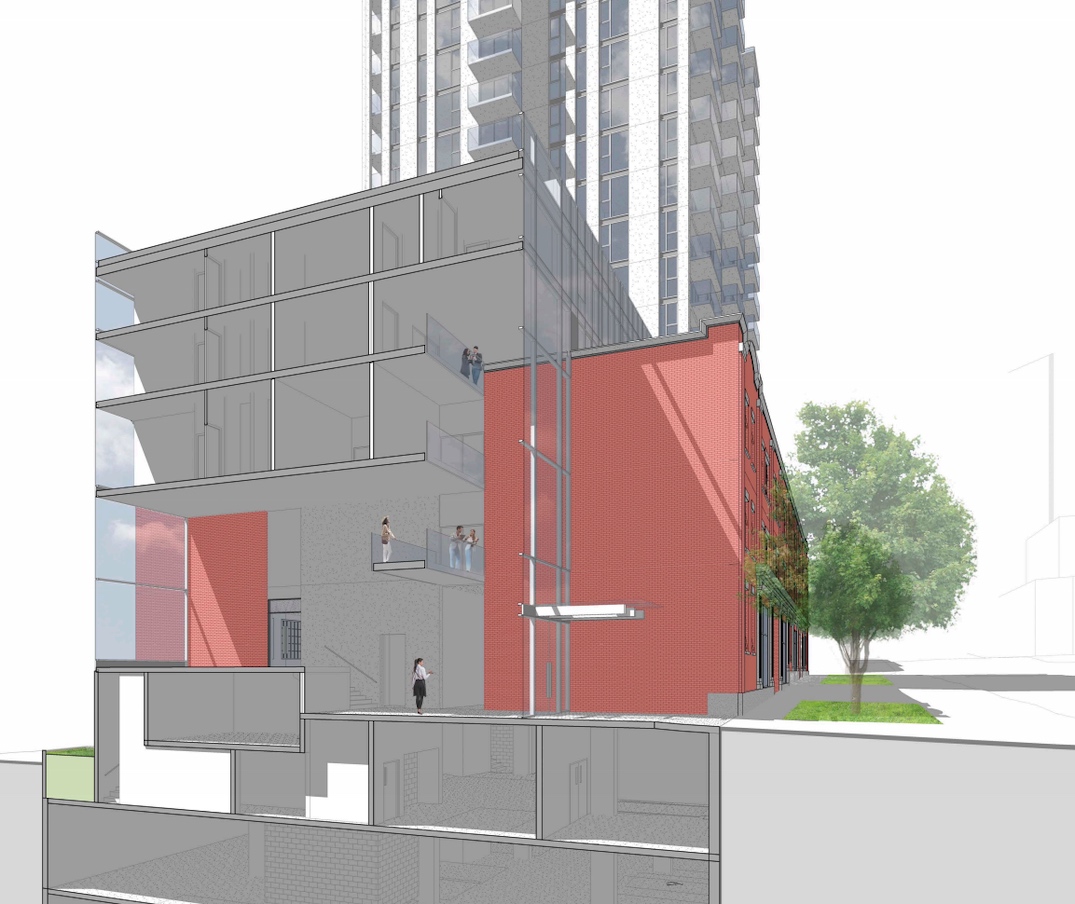 The redevelopment calls for 131 condominium units in tower levels five to 29, and approximately 120 hotel rooms within the heritage podium and new hotel building addition.

The existing Catholic Charities shelter found within the heritage building will be relocated to a new location in downtown. The building was the longtime home of the headquarters of the Roman Catholic Archdiocese of Vancouver. 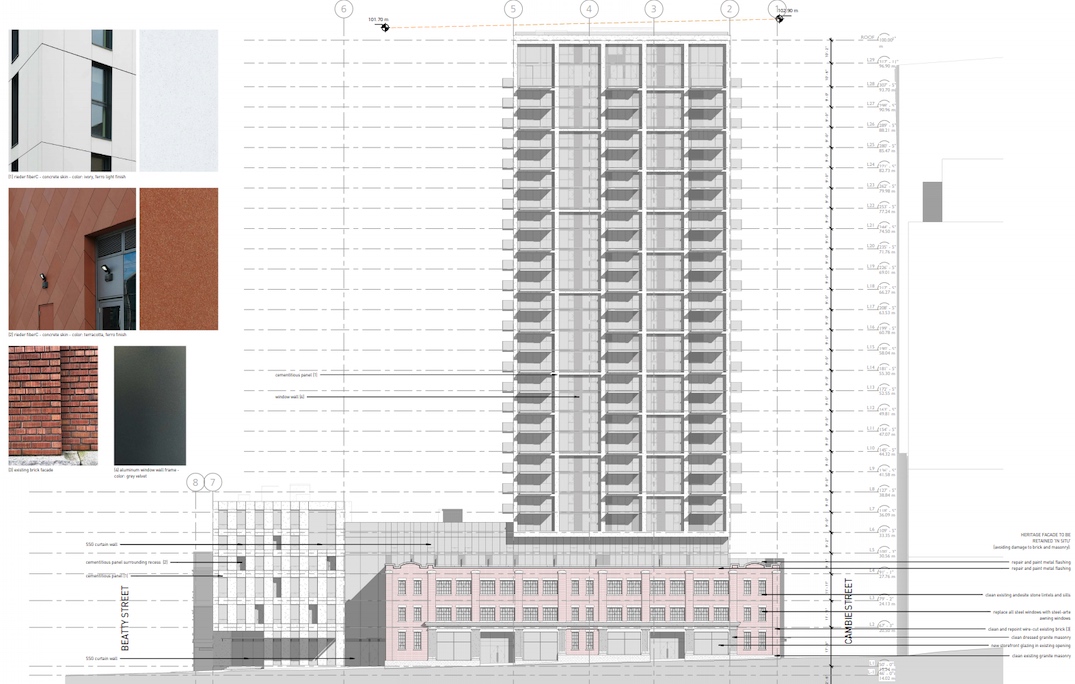