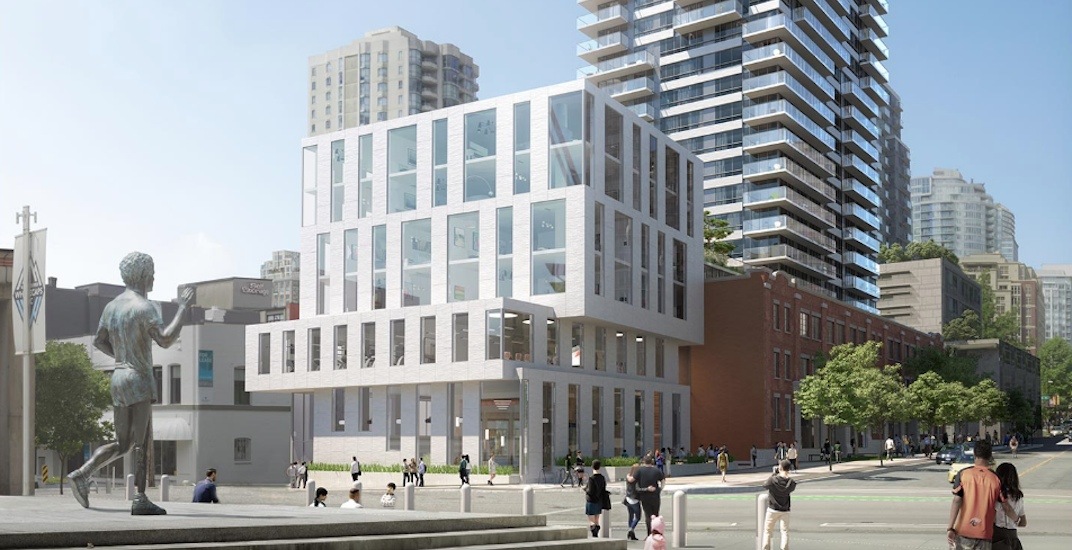 The cluster of hotels that surround BC Place Stadium will gain one additional hotel property after a unanimous approval decision by Vancouver City Council early this evening.

Local developer Amacon’s project, designed by GBL Architects, entails redeveloping three properties at 118-150 Robson Street that total over 24,000 sq. ft. in area combined: Back Forty Pub, a vacant property owned by the City of Vancouver, and the historic, three-storey Northern Electric Company Building, which was the longtime home of the Roman Catholic Archdiocese of Vancouver and currently used as the Catholic Charities’ Men’s Hostel homeless shelter.

This land assembled site is just across from Terry Fox Plaza, leading to the main entrance of BC Place. 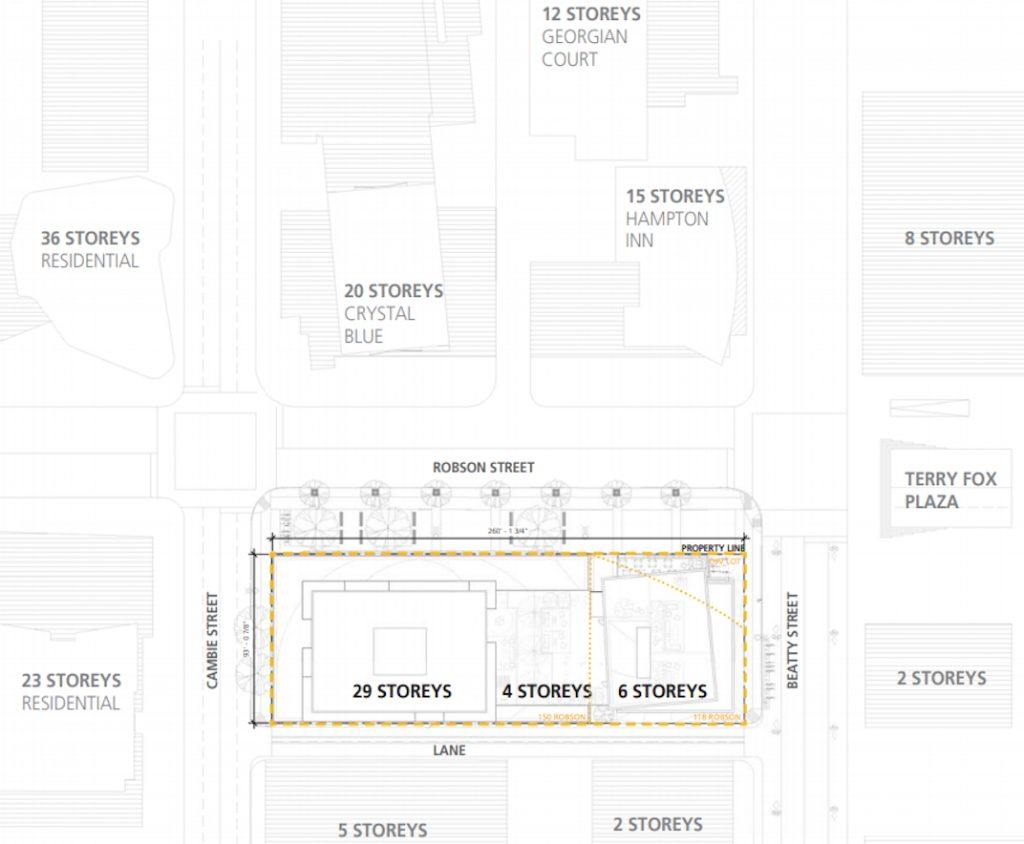 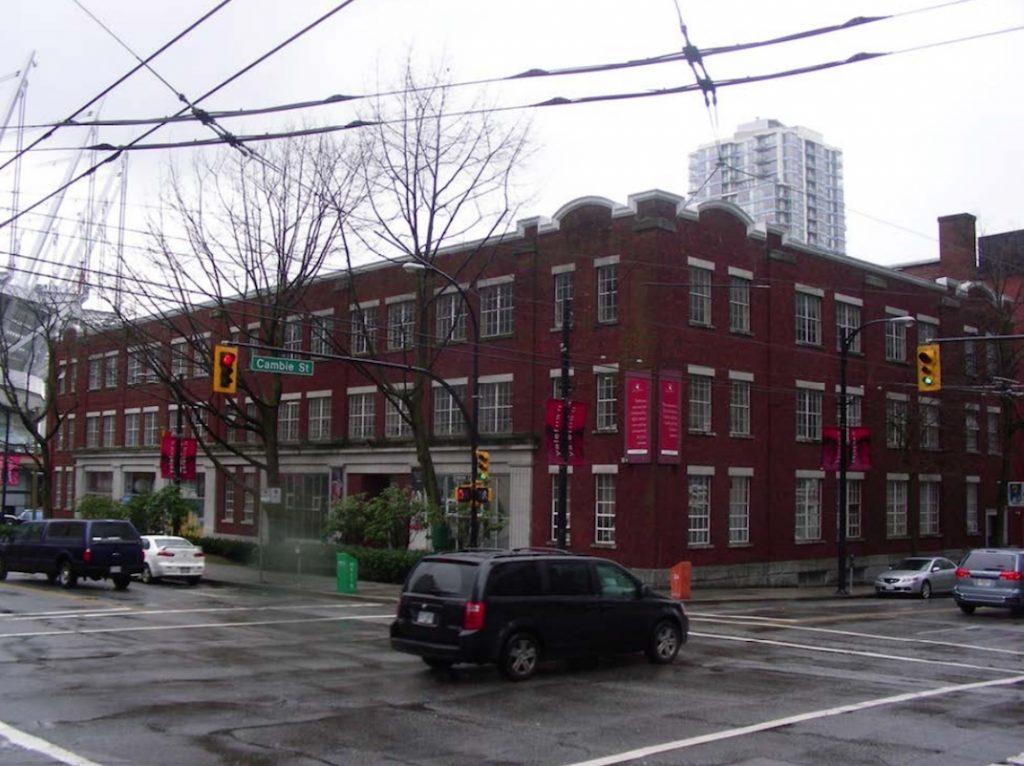 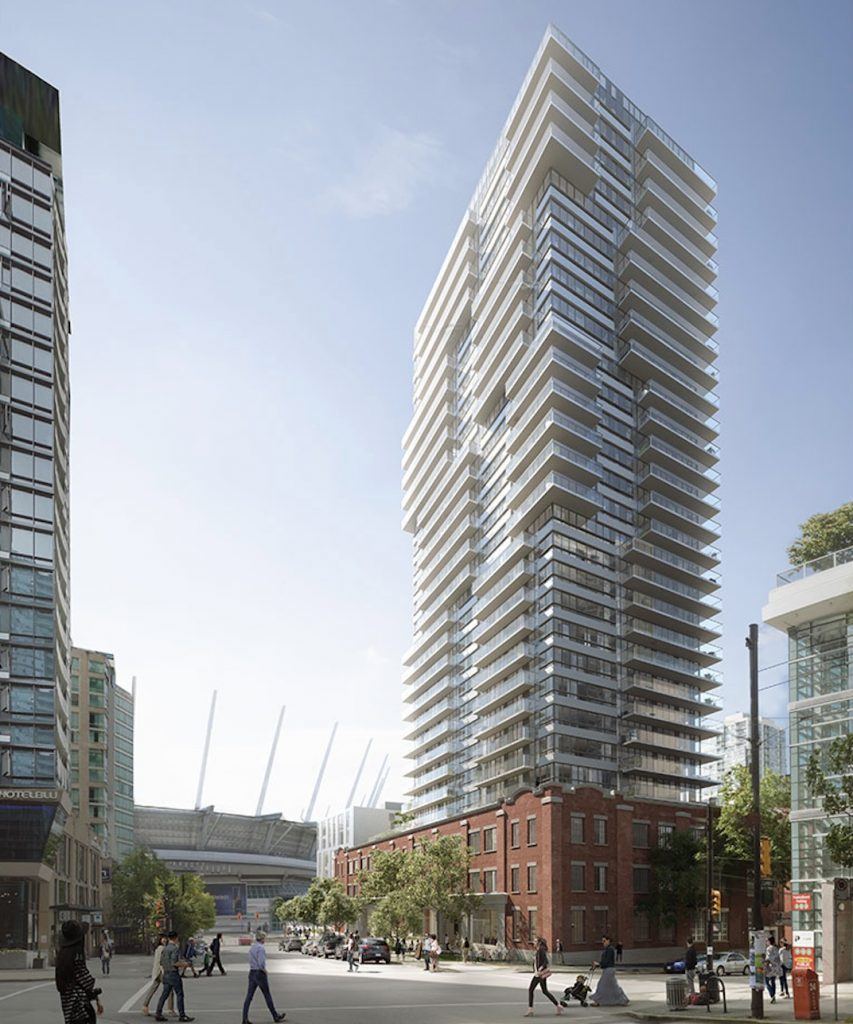 The project calls for a 29-storey, mixed-use tower that emerges from the 1928-built Northern Electric Company Building. Under the City’s policies, a tower reaching up to 450 ft can be built on the site, but view cones limit the building’s possible height to just 290 ft.

Only the brick facade of the heritage building will be retained, as previous uses of the interior by various occupants have left very little in heritage value.

“The existing peripheral structure and complete envelope of the building will be preserved and restored to strict heritage conservation guidelines outlined in the conservation plan,” reads the architect’s design rationale.

Furthermore, the tower that replaces the gutted interior is envisioned to be “simple and uniform profile, with limited architectural elements, [so that it] is mindful of the heritage character of the building it stands on.” 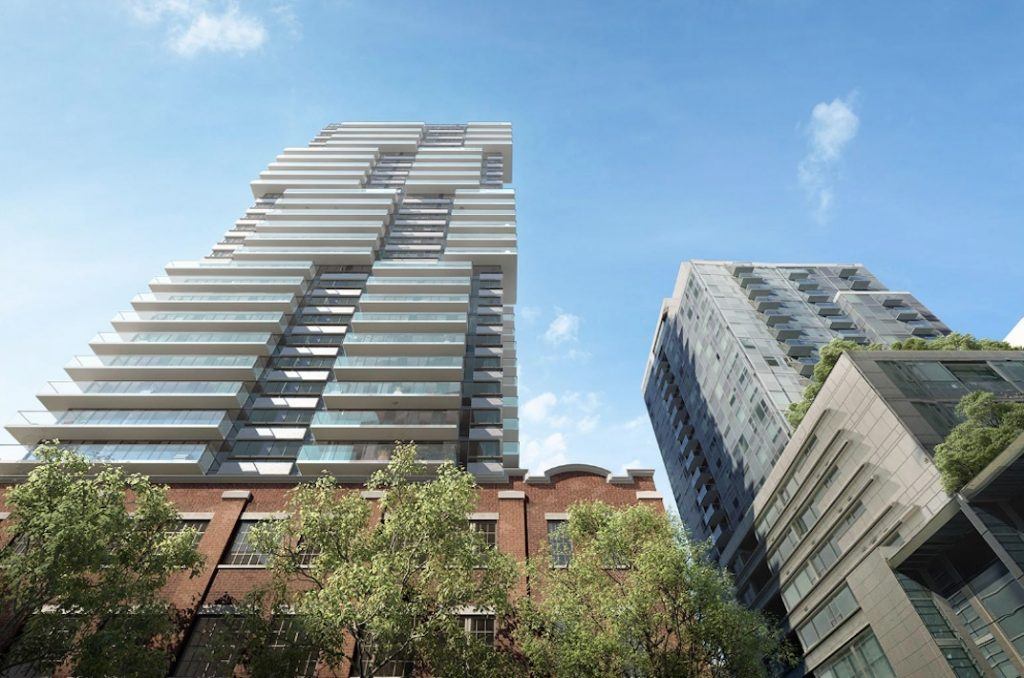 The first few levels of the tower, including the heritage building, will be utilized as retail, restaurant, and hotel space while the upper levels will be occupied by a total of 131 homes. The unit mix is 42 one-bedroom units, 71 two-bedroom units, and 18 three-bedroom units.

“Though maintaining a uniform tower profile, the massing is broken down by carefully shifting the balconies and varying the skin treatment of the façade, creating movement throughout the tower form. The area of linear balconies increase on the south elevation to address the sun exposure,” the rationale continues. 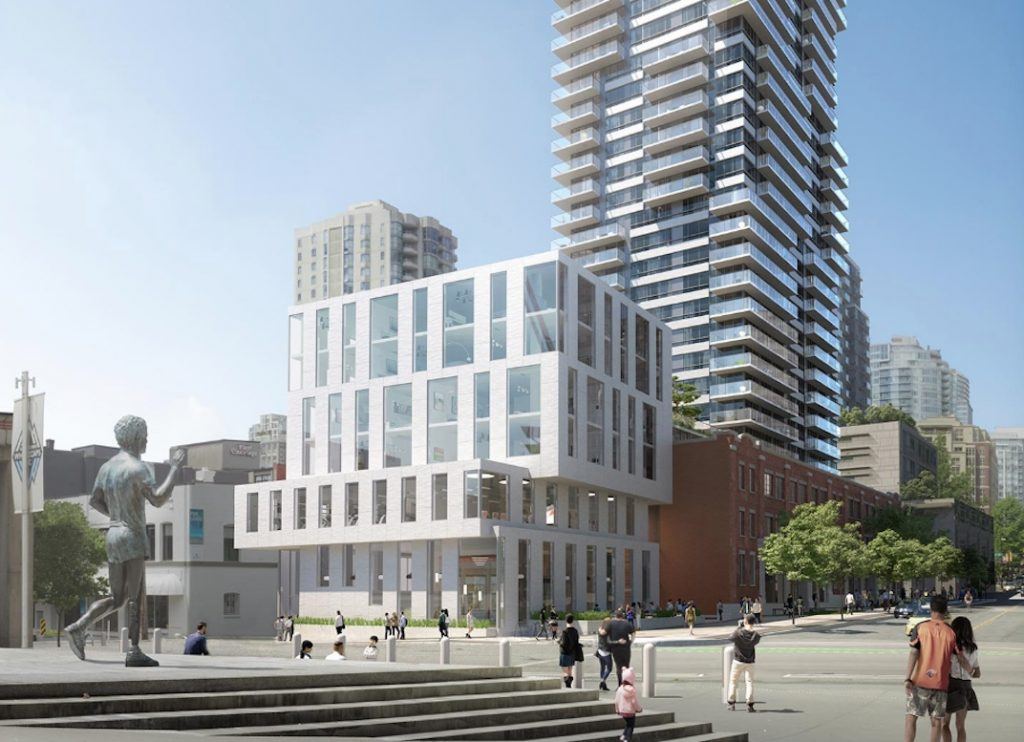 On the vacant property on the northeast corner of the lot, closest to Terry Fox Plaza, there will be a six-storey hotel building expansion. It is estimated the entire hotel component of the project will produce about 120 rooms, but no hotel operator has been named at this early stage of planning.

“This [hotel] building is intended to relate to the form and character of the existing buildings along Beatty Street between Robson and Smithe; and at the same time help make the transition to the higher buildings to the north of Robson,” adds the rationale.

“It has a monolithic expression and the pattern of its fenestration responds to the scale and proportion of the buildings along that block of Beatty Street, addressing the special characteristics of its particular location.” 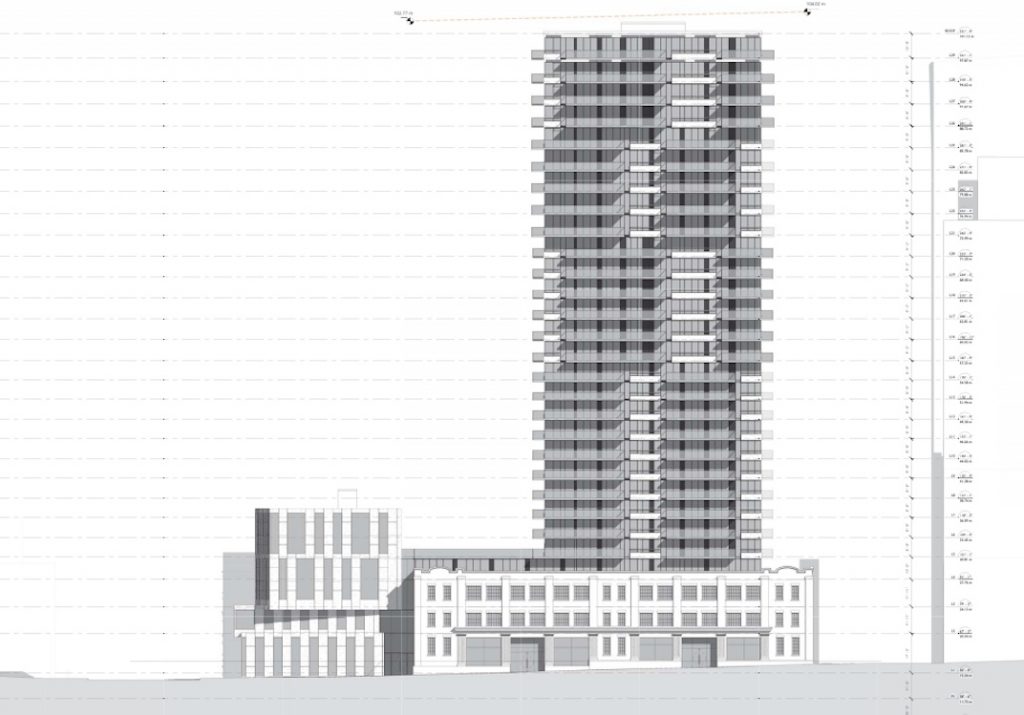 Two separate lobbies are planned; the hotel lobby is on Robson Street while the residential lobby is slated for Cambie Street. A common outdoor amenity space is provided on the fifth level as an extension of 2,300 sq. ft. of indoor amenity space.

Five underground levels will carry a total of 246 vehicle parking spaces, with 198 stalls dedicated to residents and 48 stalls to hotel operations. Amacon is also pursuing a LEED Gold sustainability target. 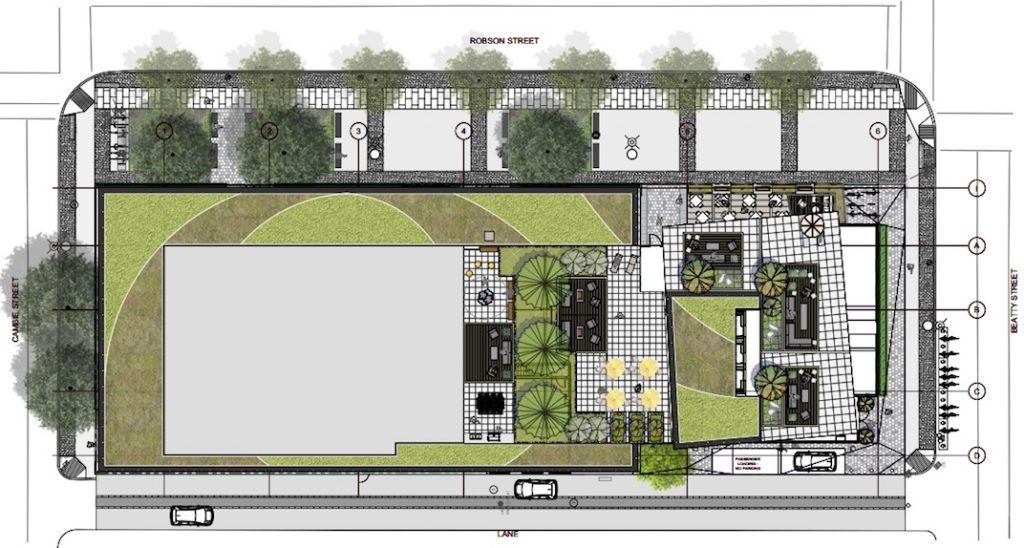 To achieve this project, the developer has engaged in a Heritage Revitalization Agreement with the City to increase the site’s allowable density from 5.5 FSR to 10.08 FSR. The resulting total floor area created is over 244,000 sq. ft.

As well, over $27 million in community amenity contributions have been promised in exchange for the rezoning. This includes a cash contribution of $13.6 million towards the municipal government and a new replacement homeless shelter somewhere in the city centre with a minimum floor area of 10,000 sq. ft. and capacity of 102 beds.

The archdiocese sold its headquarters in 2012 and relocated to a new facility at the former St. Vincent’s Hospital on 33rd Street near Oak Street. Its offices were located at the building since 1958.

The nearby YWCA Hotel Vancouver is proposing to expand its facility by adding an 11-storey addition with 65 rooms.

A recent report by the City found that Vancouver’s tourism industry could greatly suffer from the dwindling number of hotel rooms, which is mainly a result of the conversion and demolition of low-end hotels into residential purposes. There has been a net loss of over 1,100 rooms in the city over the past decade.