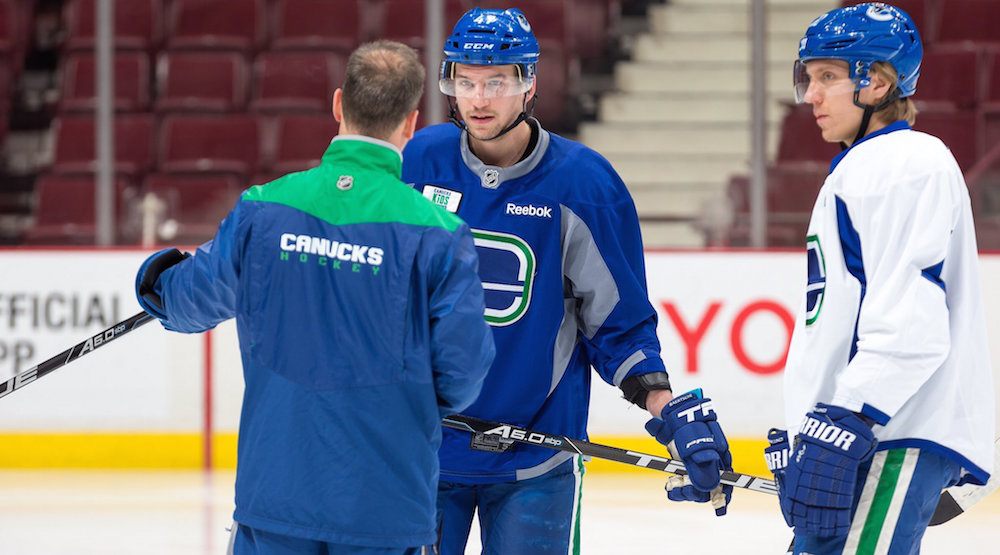 It’s been four weeks since the Vancouver Canucks officially introduced Travis Green as the 19th head coach in franchise history.

The offseason coaching shakeup left a few holes in the organization, notably a vacancy for Green’s old job in Utica, and the assistant coaching roles previously held by Doug Lidster and Perry Pearn.

Green indicated his preference to bring his Utica assistant coach Nolan Baumgartner with him to Vancouver, but nothing has been officially announced. There hasn’t been anything announced with regards to the Utica head coaching vacancy either, although the rumour mill got going on Wednesday, with Windsor Spitfires head coach Rocky Thompson being linked to the Canucks.

(2/2) Thompson is not only a candidate to be @UticaComets next head coach, but also a Travis Green assistant with the #Canucks.

Here are a few names that could warrant consideration for the three coaching vacancies:

Green on hiring Nolan Baumgartner: "I'm anticipating that it will be done." #Canucks

Given Green’s comments at his opening press conference, former Canucks defenceman Nolan Baumgartner has to be considered a frontrunner to make the move to Vancouver as assistant coach.

A long pro career as a player. Five years as an assistant coach with the Canucks’ AHL affiliate (four in Utica, one with the Chicago Wolves).

Baumgartner has paid his dues, has worked with Green for four seasons, and could fill Doug Lidster’s role responsible for the defencemen.

Green says "thanks" to Mike Johnston who he coached with in Portland. Then mentions luminaries like Arbour and Quinn as influences.

If Green wants familiarity, Mike Johnston is a great candidate.

Six years as Marc Crawford’s assistant with the Canucks (2000-2006) and the Kings (2006-2008). Seven seasons as head coach of the Portland Winterhawks, including three years with Green as his assistant.

Johnston’s only head coaching experience was as the bench boss with Pittsburgh during the 2014-15 and 2015-16 seasons.

He’s got loads of experience, and familiarity with Green.

"We haven't had trouble with lay-offs so far" – Windsor coach Rocky Thompson on the three day break ahead of the memorial cup final. pic.twitter.com/VooTv6QvDa

Thompson was recently linked to the Utica head coaching position. He’s currently coaching the Windsor Spitfires in the Memorial Cup.

Eight years as an assistant in the WHL, AHL, and NHL. A lot of success in just two years as head coach in Windsor.

The 39-year-old is considered an up-and-coming coach. They could groom the former NHL enforcer into Green’s successor one day.

Why didn't anyone tell me Steve Konowalchuk is Seattle's coach? Let's go Thunderbirds.

Another coach who brought his team to the Memorial Cup this season, Steve Konowalchuk checks a lot of boxes.

A veteran of 790 NHL games, Konowalchuk was an assistant with Colorado for two seasons, and the head coach with Seattle for the past six.

Konowalchuk would be a fit with Utica, with a chance to become an NHL head coach one day. He also played with Trevor Linden when he was a player with the Washington Capitals.

At just 38 years old, Kris Knoblauch is the youngest candidate on this list.

Seven years as a head coach in junior with Erie and Kootenay.

His teams win all the time. He’s won two OHL titles, lost in the Final once, and been to the third round twice.

Manny Malhotra rejoined the Canucks in a part-time coaching role last season. He’d be a candidate to replace Perry Pearn as one of Green’s assistants.

He played 991 NHL games, and spent one season as a development coach with the Canucks.

As a player, he always seemed destined to become a coach.

& Congrats to Cambridge's Scott Walker on winning gold with Canada as an assistant coach! #WJC2015 #Canada

Speaking of former Canucks players already in the organization, Scott Walker could be a fit as Utica’s head coach.

He played 829 NHL games and coached the Guelph Storm for parts of five seasons, winning an OHL championship in 2014.

He checks a lot of boxes and the organization knows him well, employing him as a development consultant since 2015. He’s also a former teammate of Trevor Linden.

Another former Canucks teammate of Trevor Linden, Tim Hunter could be in line to return to his old team.

Played 815 games, winning a Stanley Cup with Calgary in 1989. He has 14 years of experience as an assistant coach in the NHL with Washington, San Jose, and Toronto. He’s been the head coach of the Moose Jaw Warriors in the WHL for the past three seasons.

He’s done it all. He’s well qualified for the Canucks assistant’s role, or he could build on his experience as a head coach in Utica.

Continuing with the theme of former Canucks players is Martin Gelinas, who is currently an assistant coach with the Calgary Flames.

If he’s interested in becoming an NHL head coach one day, he’ll need experience running his own bench at some point. If not, he’s got a lot of experience in an assistant’s role.

Dean Evason Deserves All the Credit in the World for the Nashville Predators’… https://t.co/y9DUrTbb1i pic.twitter.com/cA3EensM2Y

Dean Evason isn’t short on experience, and would be a great fit with Utica if he wants to change organizations.

Six years coaching in the WHL, including two with the Vancouver Giants. He was an assistant in Washington for seven years before becoming the head coach of Nashville’s AHL affiliate in Milwaukee in 2012. He also played 803 games in the NHL.

You can credit Evason for developing a number of Nashville’s good young players who have excelled in the Stanley Cup Playoffs this season. Current Preds head coach Peter Laviolette isn’t going anywhere anytime soon, so perhaps a change of scenery would be a benefit to him?

"This is a great opportunity for me." – new #Sens associate coach Marc Crawford pic.twitter.com/IOEMO5GdZb

A member of the surprising Ottawa Senators this season, Marc Crawford’s love for Vancouver is well known.

This is Crawford’s first year back in the NHL as an assistant coach, after four years as a head coach in Switzerland. He has 14 years of head coaching experience in the NHL, including a Stanley Cup in 1996.

Crawford could lend experience to a rookie NHL head coach in Vancouver.

It’s only a matter of time before Bob Boughner gets a head coaching job in the NHL.

He won two Memorial Cups in eight years with Windsor. He’s been an assistant in the NHL with Columbus and San Jose. He also played 630 NHL games as a player.

Boughner would be a fit as Utica’s head coach, provided he wants to gain experience as a head coach with pro players.