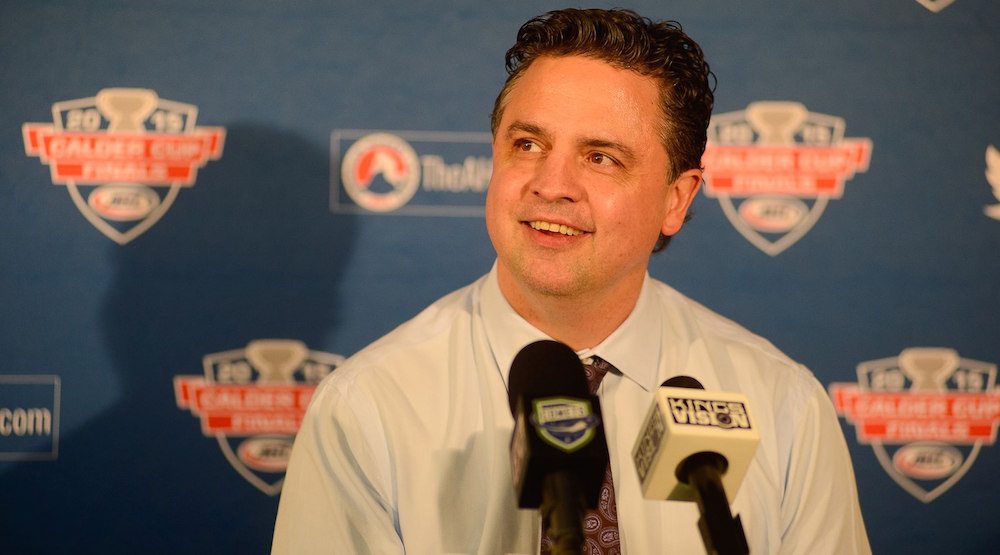 The Canucks have called a press conference for Wednesday morning where they are expected to announce Travis Green has been hired as the 19th head coach in franchise history.

Like Willie Desjardins before him, Green is getting his first NHL head coaching job with the Canucks. The Castlegar native is the first BC-born Canucks head coach hired since Tom Renney in 1996.

Like Alain Vigneault in 2006, Green is getting an internal promotion from the organization’s AHL affiliate, and already has experience coaching a number of players on Vancouver’s roster. Sven Baertschi, Jake Virtanen, Brendan Gaunce, Alex Biega, and Jacob Markstrom were all a part of Utica’s Calder Cup finalist team in 2015.

In four seasons in Utica, Green had above-average success with below-average teams.

Green had success in junior too, winning a WHL championship in his only season as a head coach in Portland.

A gritty two-way centre during his 14-year NHL career, Green is known to be equally as determined as a head coach.

.@timandsid Johnston: Green sticks to his plan. He is a very determined and focused individual. He's ready to take the next step. #Canucks

“I’m demanding,” the soft-spoken coach told Daily Hive last summer. “I expect a lot out of my players. But going the other way, I give them a lot. I’m fair, open, and honest. I think players know that they can trust me and I want the best for them.”

Though Green’s teams in Utica had a measure of success with minimal talent, the Comets were not rockstars on the power play, ranking in the bottom half of the AHL’s 30 teams each season. Utica did excel on the penalty kill during their two playoff seasons though, finishing seventh and fourth, respectively.

If you’re expecting Green to instantly connect with young players without any growing pains, you might be disappointed.

His demanding coaching style has resulted in some players receiving less ice time than you might think with the Comets. Jake Virtanen saw significant time on Utica’s third line last season rather than being gifted top-six minutes after being sent down from the Canucks. Green also made Jordan Subban a healthy scratch in an effort to get his message across.

“I push them hard. I try to install certain things that I want them to do and I’m a little bit relentless in getting that point across but I think I’m also fair.”

Highly thought of around the league, Green was interviewed for head coaching vacancies in Anaheim and Calgary last season. This offseason the Canucks were contacted by Florida for permission to speak with Green, which they obviously declined.

“I got into coaching after I retired (in 2008) with a plan,” Green said. “The end plan being in the NHL again as a coach, and hopefully winning a Stanley Cup.”

Green had opportunities to get back into the NHL last season as an assistant coach, but felt like running his own bench in the AHL was of more value.

And now, the 46-year-old gets his chance.

It won’t be easy, as was the case in Utica, Green is arriving on the scene without a lot of talent to work with. At least at first.

With a contract reportedly four years in length, he should get a chance to build something with the Canucks.