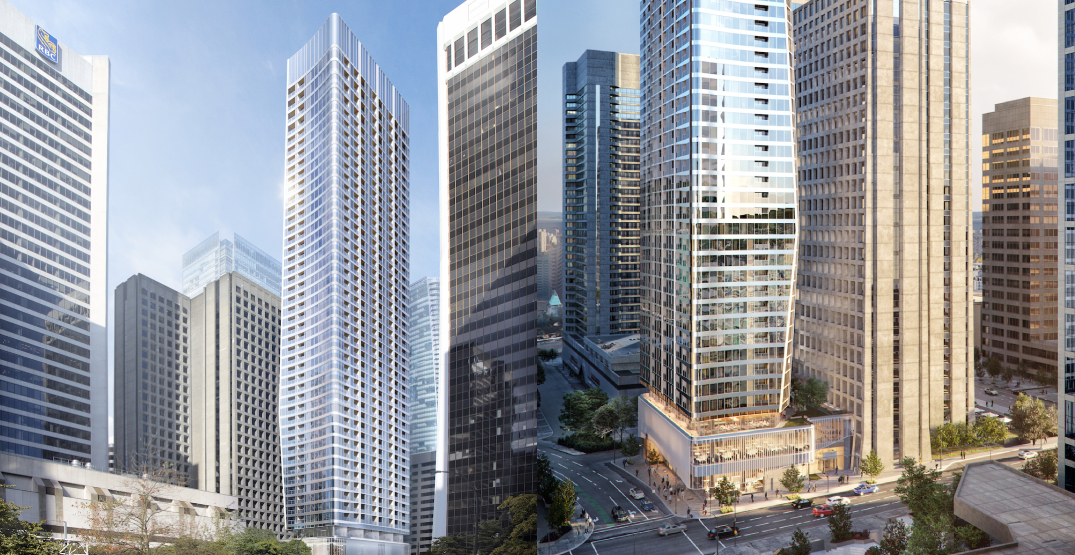 The proponent of a new major rental housing tower in the heart of downtown Vancouver’s Central Business District (CBD) has signalled that they are willing to reach the middle ground and compromise to closer align with existing municipal policies regulating the site.

Daily Hive Urbanized first reported in Spring 2021 that Reliance Properties is looking to redevelop the parkade at the southeast corner of the intersection of Thurlow and Dunsmuir streets into a 47-storey tower with 100% rental housing.

But major revisions will be made to the project during the upcoming public meeting, with the developer now indicating they will dedicate the lower floors of the tower for commercial hotel use.

The proposal originally called for 484 rental housing units, with 104 of these units dedicated as workforce housing for essential workers at below-market rates. The forthcoming revisions will reduce the total number of market rental homes and below-market rental homes from 484 units to 429 units, with the reduction in rental housing floor area now accommodating 72 hotel rooms. The architectural concept is by IBI Group.

“In our amended proposal, while there is some reduction of homes, including workforce housing, we have created direct jobs and benefits for the tourism industry, which we believe should further encourage council to approve the project for public hearing,” said Jon Stovell, CEO of Reliance Properties. 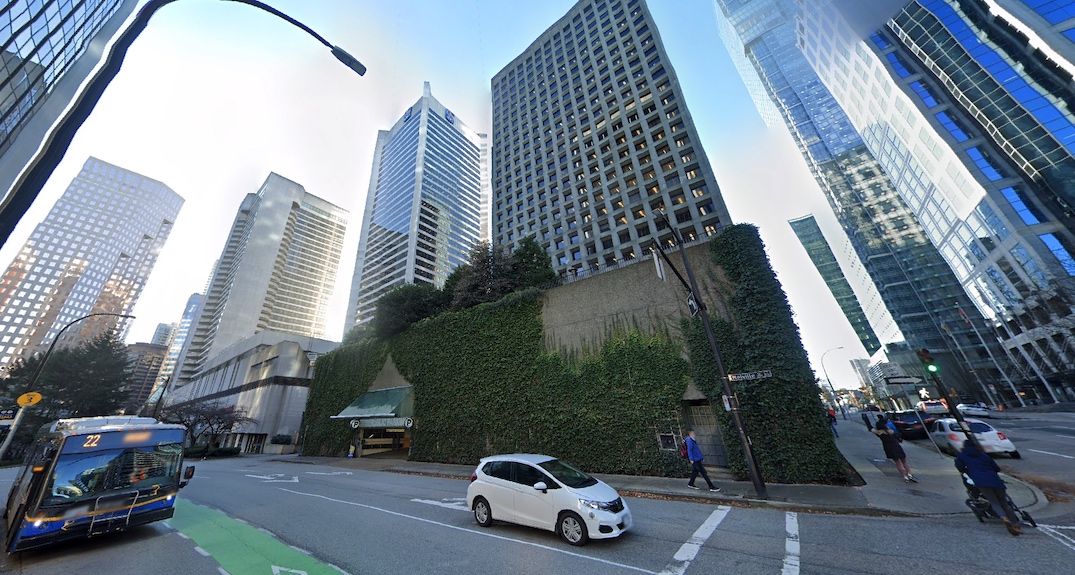 Proposed site for a tower replacing the parkade at 1075 West Georgia Street’s rear at the corner of Dunsmuir Street and Thurlow Street. (Google Maps) 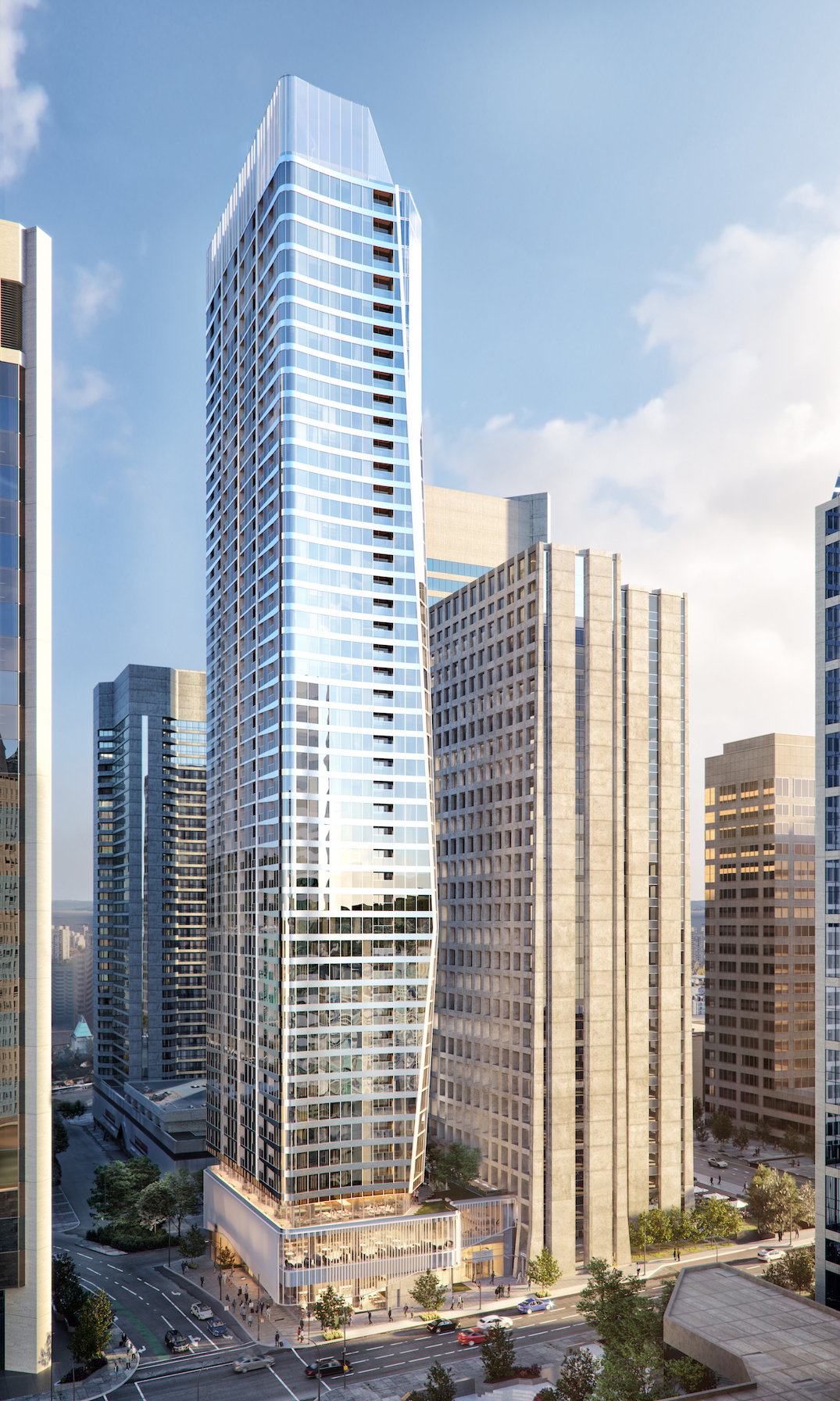 Under existing policies for the site, only office and hotel uses are permitted under the Rezoning Policy for the Central Business District and CBD Shoulder.

This stems from a 2009 enacted policy, when the CBD was being swept up by rampant condominium development that took up much of downtown Vancouver’s long-term job and economic development capacity. Residential uses were then limited to encourage and preserve space for future major office and hotel developments to address these very real concerns at the time.

In their report to City Council, City staff suggest such 100% residential uses in Reliance Properties’ proposed tower would negatively set a precedent for other sites in the CBD to be considered for non-office and hotel uses.

However, it is unclear at this time whether the new addition of hotel uses would change City staff’s position on the proposal.

“The introduction of market housing into areas designated for job space has implications for the wider CBD area, creating a competitive tension between job space and residential uses in areas identified for office and hotel uses,” said City staff on their preliminary analysis of 100% rental residential uses.

“This could substantially limit the city’s ability to grow the supply of job space in high demand areas over the long term and would result in continued upward pressure on commercial rents, impacting the diversity of employers who can afford to operate in Vancouver.”

According to City staff, the CBD accounts for only 13% of the entire downtown Vancouver peninsula where standalone office buildings are viable to pursue. They assert such a project leading to the “reintroduction of residential uses in this key commercial hub would risk destabilizing land values in the area and make commercial development less viable,” and that “there is capacity to grow rental housing outside of this core downtown area.”

City staff further add that there is no existing policy to evaluate and regulate “workforce housing,” and that “there is no compelling reason brought forward to deviate from the Policy or to consider this site differently from similarly situated sites that have complied with all applicable policies.” 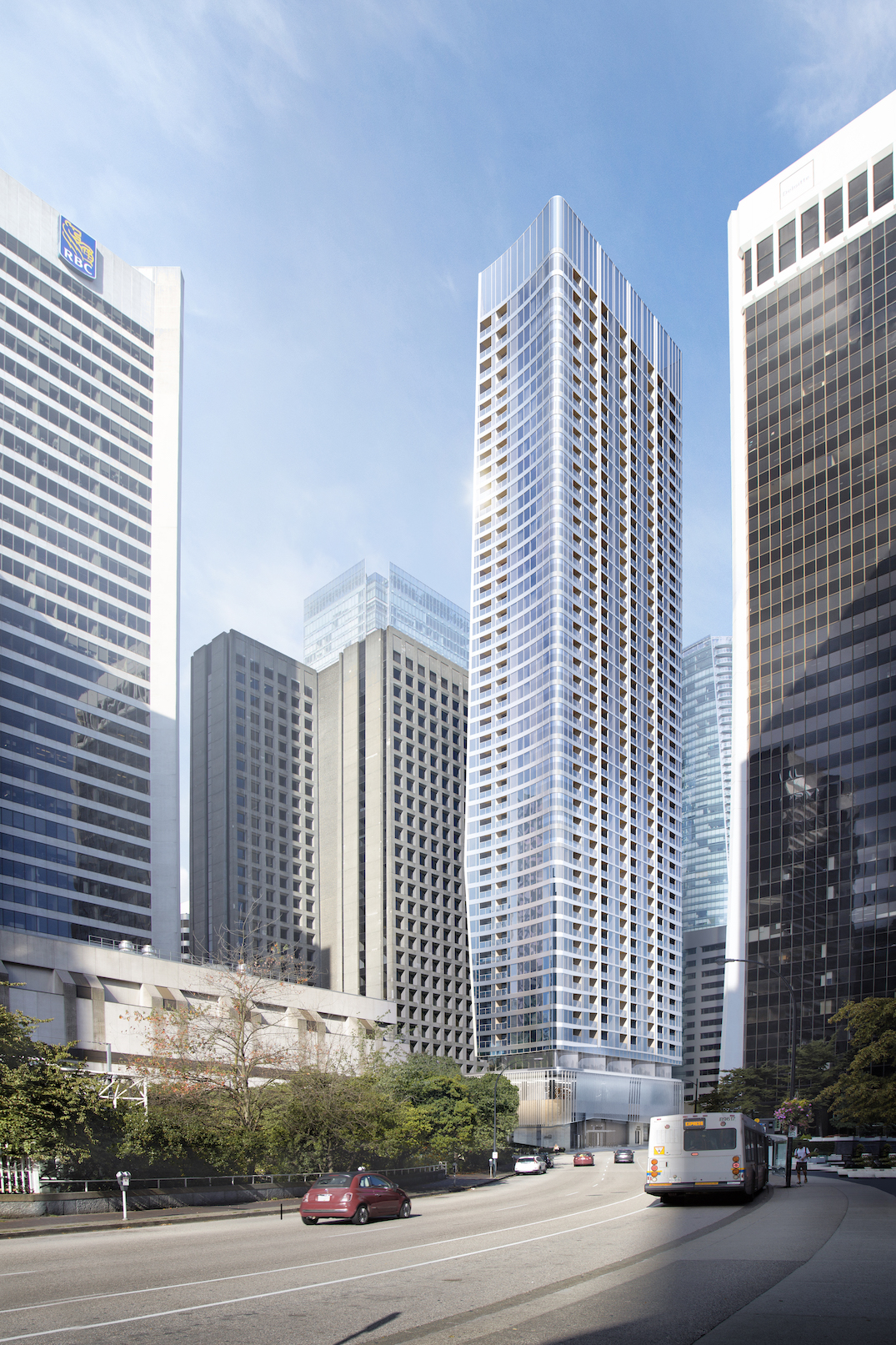 The developer explains that their approach for a tower with residential uses stems from the site being financially unfeasible for a 100% office and/or hotel tower, largely due to the site’s small footprint at the intersection’s corner.

The parkade property — immediately adjacent to SkyTrain Burrard Station — forms the backside of the 1969-built, 27-storey Arthur Erickson Place office tower, previously known as the MacMillan Bloedel Building, at 1075 West Georgia Street. In 2019, Reliance Properties partnered with KingSett Capital and Crestpoint Real Estate Investments to acquire the heritage office tower and attached parkade, and make major reinvestments into the office space to re-establish it as a high-calibre corporate office location.

With a small footprint and the required building setbacks — the buffer space separation needed between the new tower and Arthur Erickson Place — the parkade site can only accommodate a small tower floor plate size of 8,500 sq ft. The spatial physical constraints will make this a very narrow building.

For these reasons, he says, this parkade site is unlikely to ever be an office building envisioned under existing City policy. 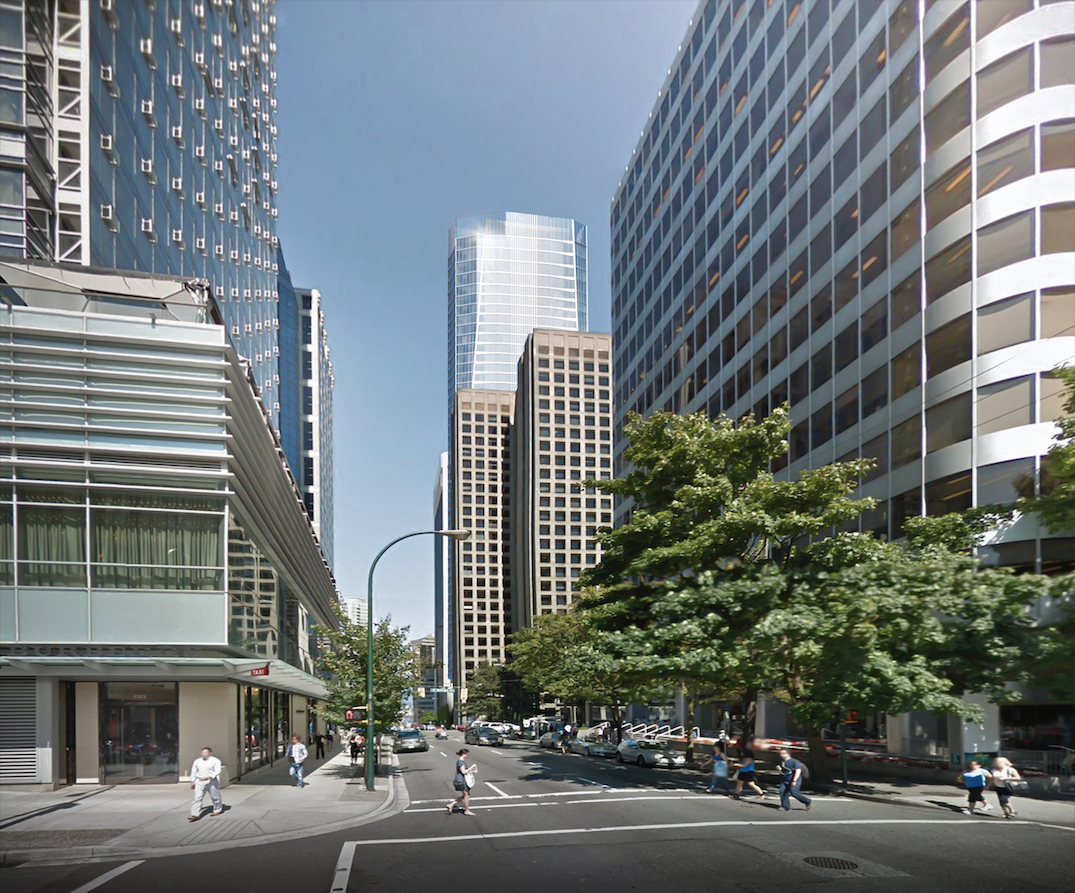 To their credit, this is also not a developer that shies away from building office space where it is financially viable; Reliance Properties is currently one of the largest developers of new office space in Metro Vancouver, with the firm behind about one million sq ft of the over five million sq ft of office planned or under construction in downtown Vancouver.

Construction began this past spring on Reliance Properties’ 32-storey office tower with 344,000 sq ft of space at 1166 West Pender Street in the CBD. The floor plate sizes are generally about 12,000 sq ft.

In May 2020, City Council approved the firm’s rezoning application to build a 29-storey office tower with 445,350 sq ft at 601 West Pender Street, also within the CBD. Its floor plate sizes are approximately 15,000 sq ft.

Both future West Pender office towers are designed for tech firms and other larger companies.

Construction recently reached completion on the firm’s The Offices at Burrard building at 1280 Burrard Street, where Lululemon has leased 120,000 sq ft of space for an expansion office. 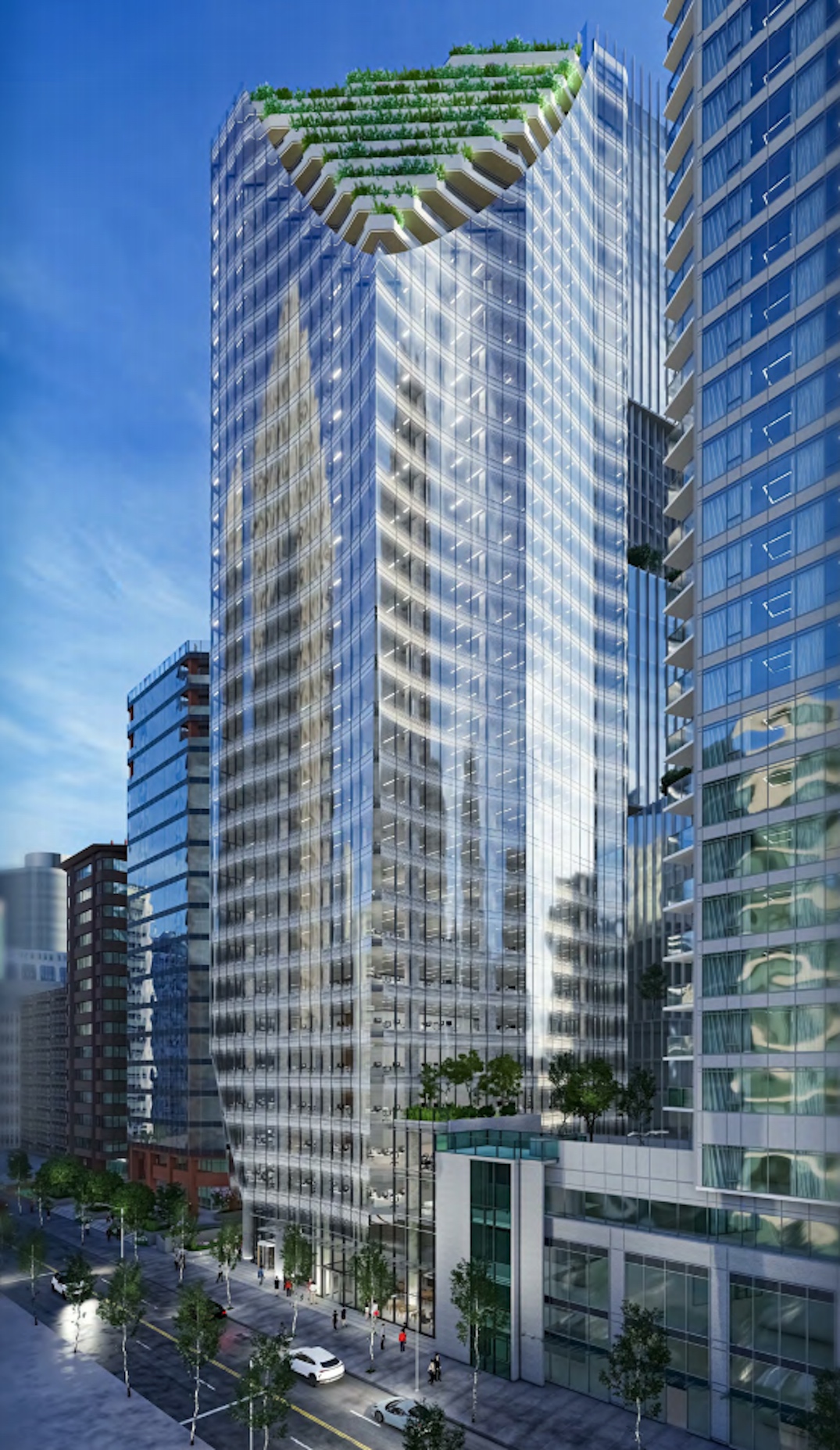 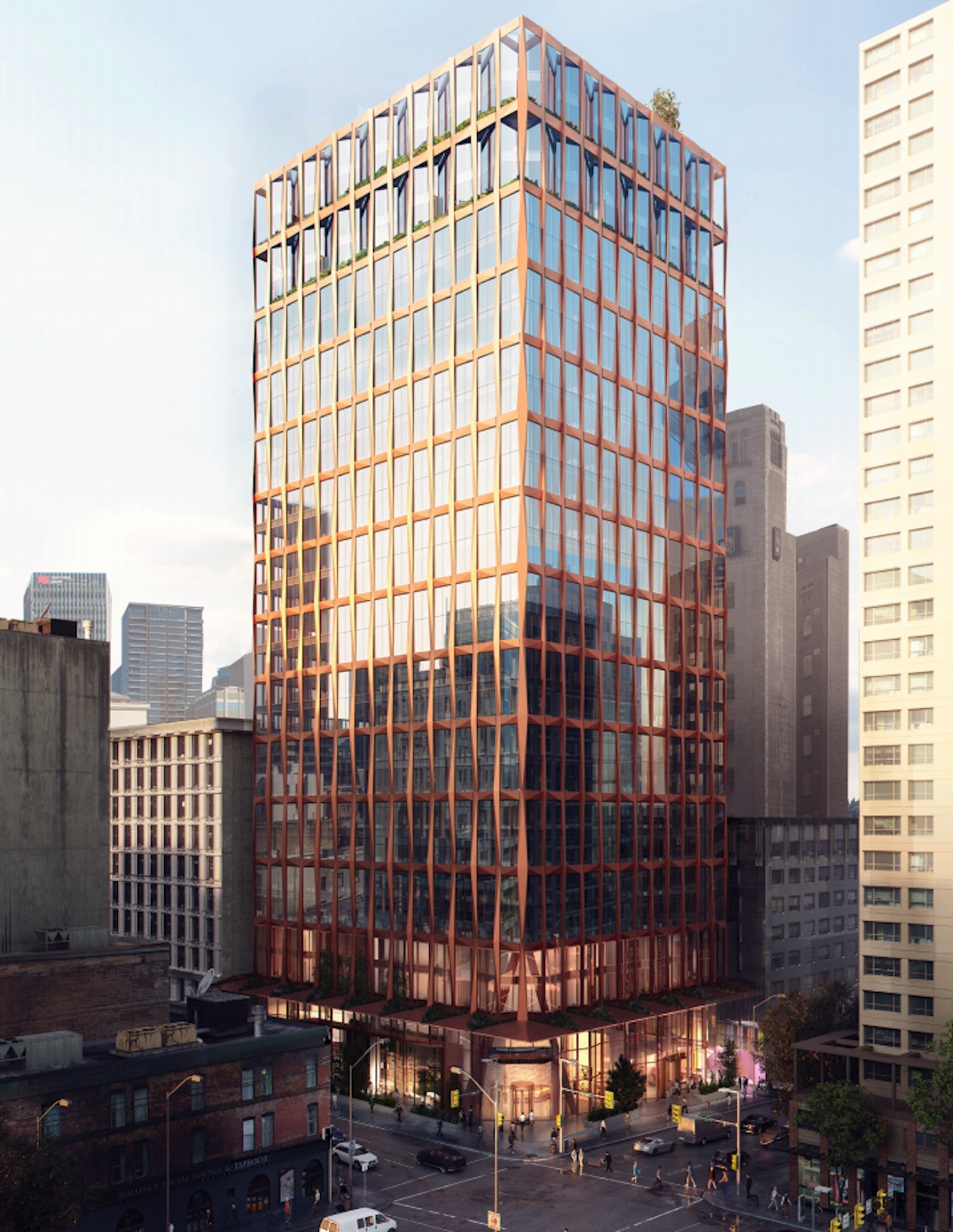 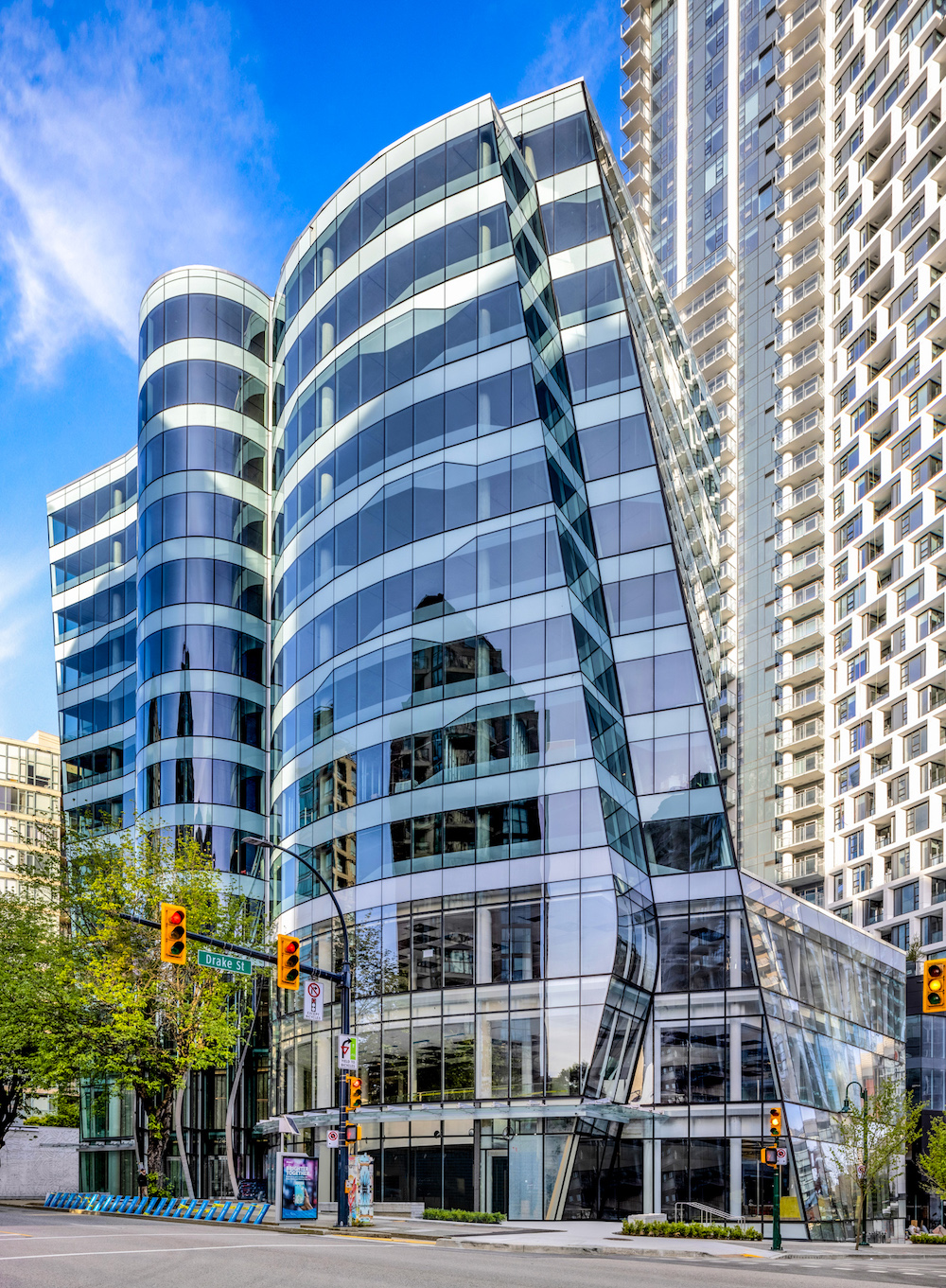 Reliance Properties is also currently in the process of forming a land assembly on the city block at the northwest corner of the intersection of Dunsmuir and Richards streets for the purpose of building a major office development — strategically in close proximity to Amazon’s new office hub in the area.

Additionally, Reliance Properties recently acquired the six-storey office and retail building at 815 Hornby Street — immediately west of Robson Square. The developer previously told Daily Hive Urbanized it is looking for an international architect for this high-profile location, with a redevelopment consisting of a hotel and possibly some residential uses, given that it is permitted by existing city policies.

Increasingly, due to high land costs, the economics of new hotel developments in downtown Vancouver can only work if the project is a mixed-use building that incorporates some residential uses as well, typically in the upper levels above the hotel floors. There is an immense shortage of hotel rooms in Vancouver to meet long-term tourism growth, with the events of the last two years, resulting in the closure of hundreds of hotel rooms (mainly from government acquisitions for housing the homeless), exacerbating the major shortage that existed even before the pandemic.

Reliance Properties states it has received more than 20 letters of support for its rental housing tower project, including Ambulance Paramedics of BC, local restaurants, hotel operators, builders, property managers, and business owners.

This proposal is being considered by the municipal government under City Council’s 2021-mandated policy to City staff to send all proposals deemed to be “non-compliant” upstream for City Council’s final decision, rather than have the bureaucracy quietly determine the fate of such preliminary proposals behind closed doors.