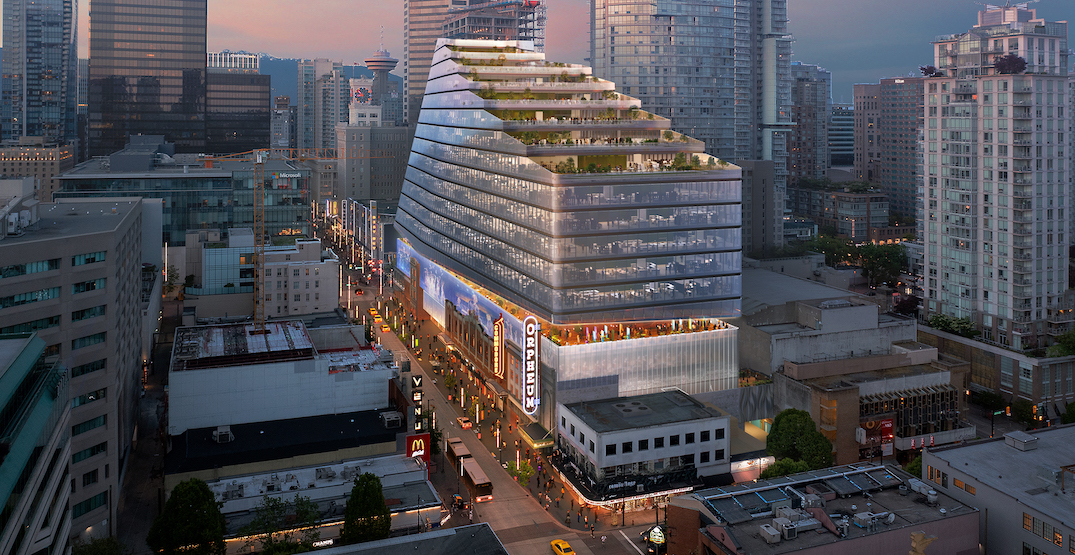 It will be up to Vancouver City Council on whether the 800 Granville Street proposal can proceed to the formal rezoning application stage.

The deliberation and decision over this matter is scheduled to reach City Council during a public meeting next week.

But in their report in advance of the meeting, City of Vancouver bureaucrats have made it clear that while they are recommending City Council should allow the rezoning application to be processed, they have strongly highlighted that they do not support the proposal.

City staff’s reasons against the proposal are limited to their overwhelming emphasis on their urban design perspectives, with the report completely disregarding the immense economic benefits and revitalization such a redevelopment would provide for the struggling Granville Entertainment District and its peripheral areas within downtown.

Essentially, City staff have a limited checklist of what they consider to be important for considering this project. The rezoning application was submitted in Summer 2021, but it has yet to be processed by City staff. 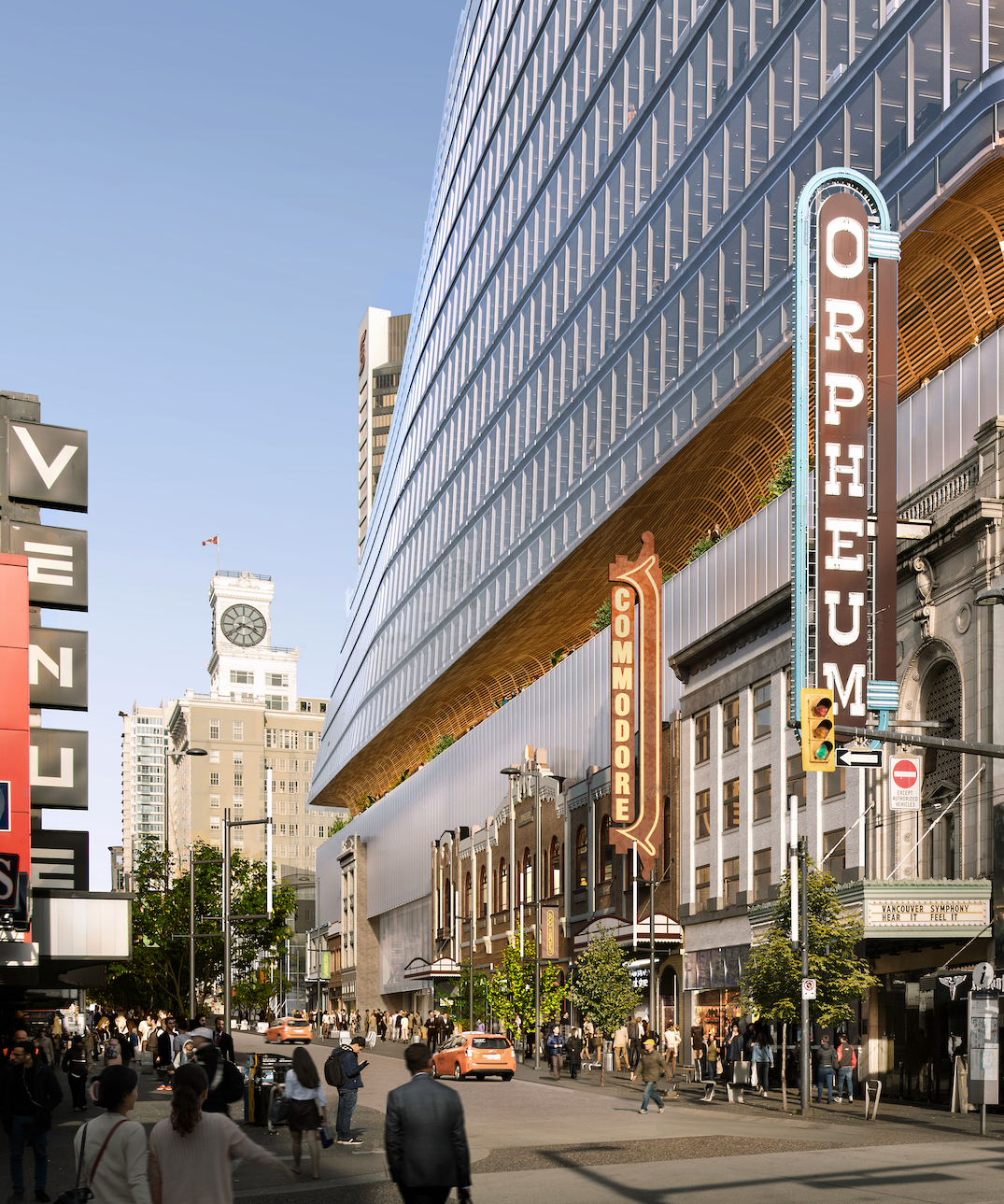 Property owner Bonnis Properties and design firm Perkins & Will Architects are proposing a 260-ft-tall, 16-storey building that would occupy most of the City block on the east side of Granville Street between Robson and Smithe streets.

There would be 420,000 sq ft of office space, with highly-coveted large office floor plates suitable for tech firms and other big companies. About 4,000 office workers can be accommodated in this space, which would generate more pedestrian traffic to enhance street vibrancy and safety, and increase spending at the area’s restaurants and shops.

About 90,000 sq ft of cultural and entertainment space is also proposed, including the full retention and preservation of the Commodore Ballroom and Commodore Lanes and billiards. In fact, the Commodore building would be completely untouched — the new office structure above would be engineered to essentially be a mid-block bridge hovering over this heritage structure. This is in addition to preserving the heritage facades of four adjacent properties on the block.

The redevelopment would provide major upgrades to the back-of-house access of both the Commodore Ballroom and the City-owned Orpheum Theatre, which would greatly improve the financial viability of both venues by expanding the number of events they can host each year.

Additionally, the proponent will provide the municipal government with a major public benefit of a 15,000 sq ft, 320 seat black box theatre space built above the Commodore Ballroom. Upon completion, this venue will be owned by the City as an expansion of the Orpheum Theatre complex. Altogether, the project will generate a net gain of 45,000 sq ft of cultural and entertainment space.

And to further animate the entertainment district, a massive two-storey tall video wall will enclose the lower section of the building along Robson Street and Granville Street — complementing the area’s neon sign heritage. 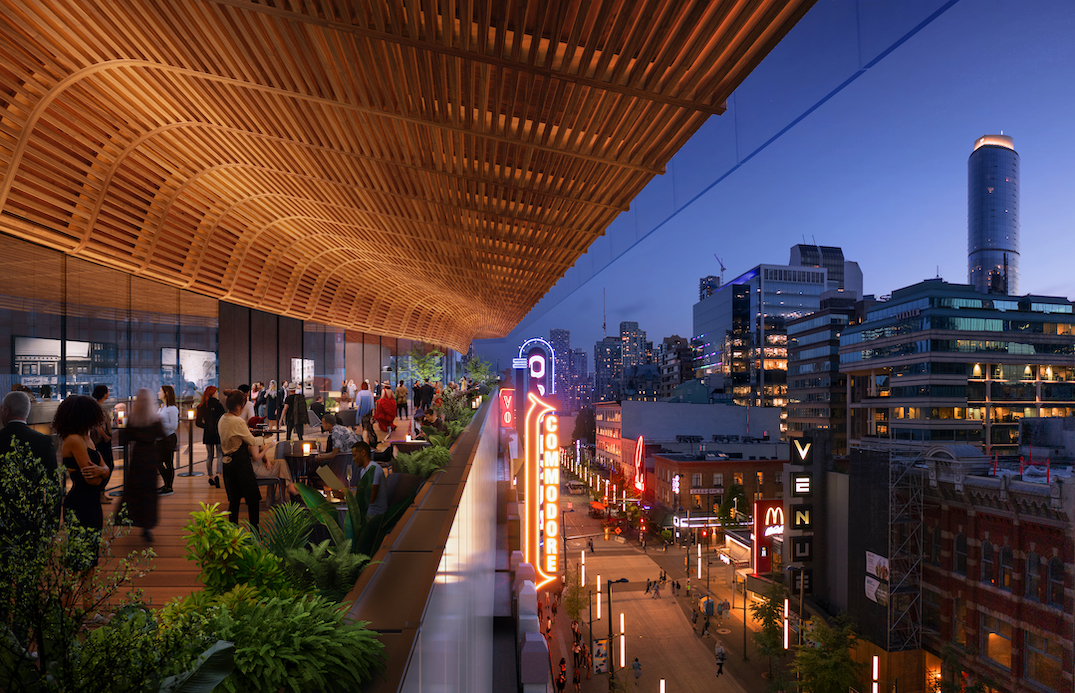 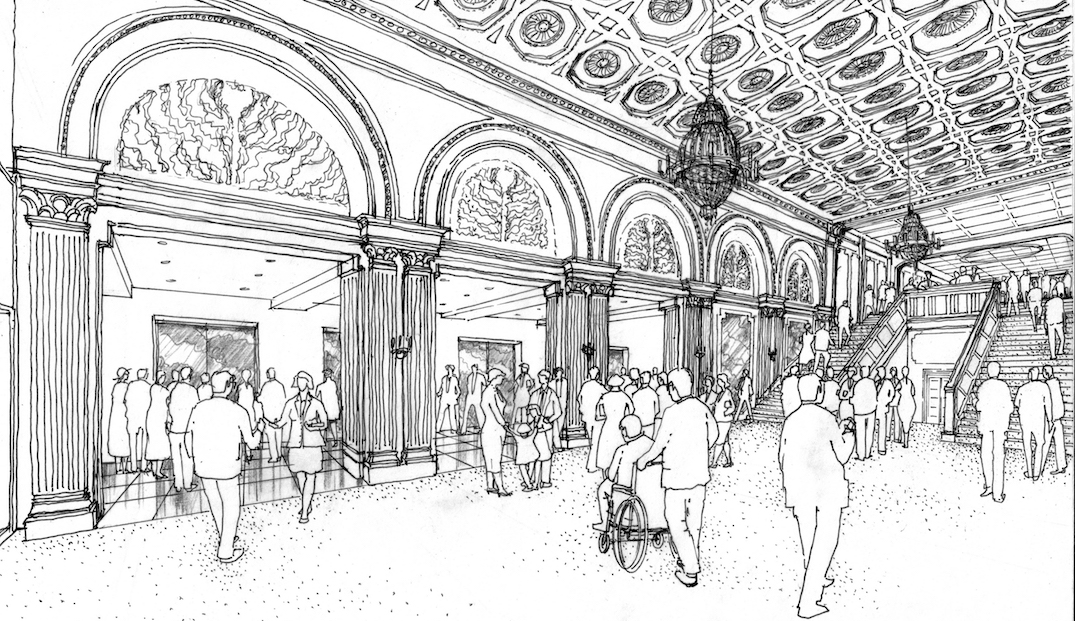 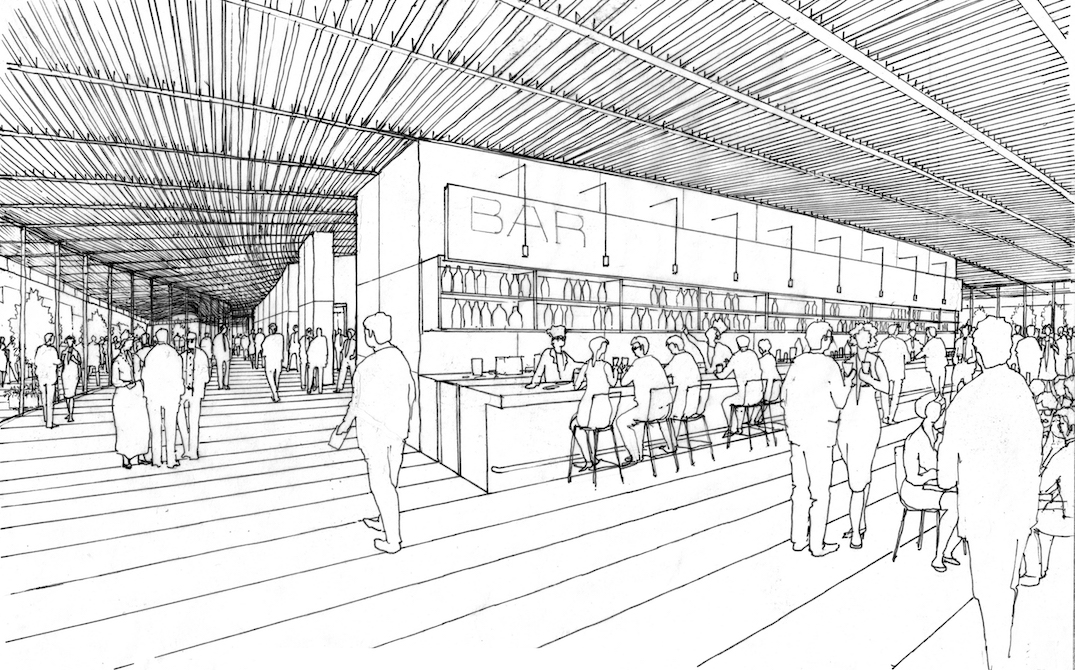 Despite the project’s clear benefits for the entertainment district and downtown as a whole, City staff claim “there is no compelling reason brought forward to deviate from existing policy or consider this site differently from similarly situated sites that have complied with all applicable policies.” At the same time, they have acknowledged that the City’s Downtown Official Development Plan’s intent is to “improve the general environment of the Downtown District as an attractive place in which to live, work, shop, and visit,” which is something the 800 Granville Street proposal absolutely accomplishes.

The existing policies City staff give more weight to are the protection of Granville Street’s low-storey “saw-tooth” building profile of varying heights and narrow street frontage widths, and the prevention of shadowing on the sidewalks. City staff believe it is particularly important to protect natural light on the sidewalks from noon to 2 pm.

City staff appear to suggest that the intangible protection of sunshine on the sidewalks does more to drive pedestrian traffic on the street, as opposed to the tangible material benefit of 100% commercial density that adds thousands of office jobs, and thousands of daily visitors to the new retail, restaurants, and cultural and entertainment venues found within the building.

“Contrary to the stated goal of revitalizing Granville Street by adding job space and new retail, the proposal in its current form could erode vibrancy by removing pedestrian scale and interest,” state the bureaucrats in their report.

“Should a development of this magnitude be allowed, the historic character of a fine-grained urban streetscape as well as its pedestrian-friendly sense of place found on Granville Street may permanently be lost. Redevelopment of the majority of a city block filled with historic character buildings, with a massive uniform structure would inevitably result in a loss of the historic cultural landscape within the Granville Street Entertainment District.” 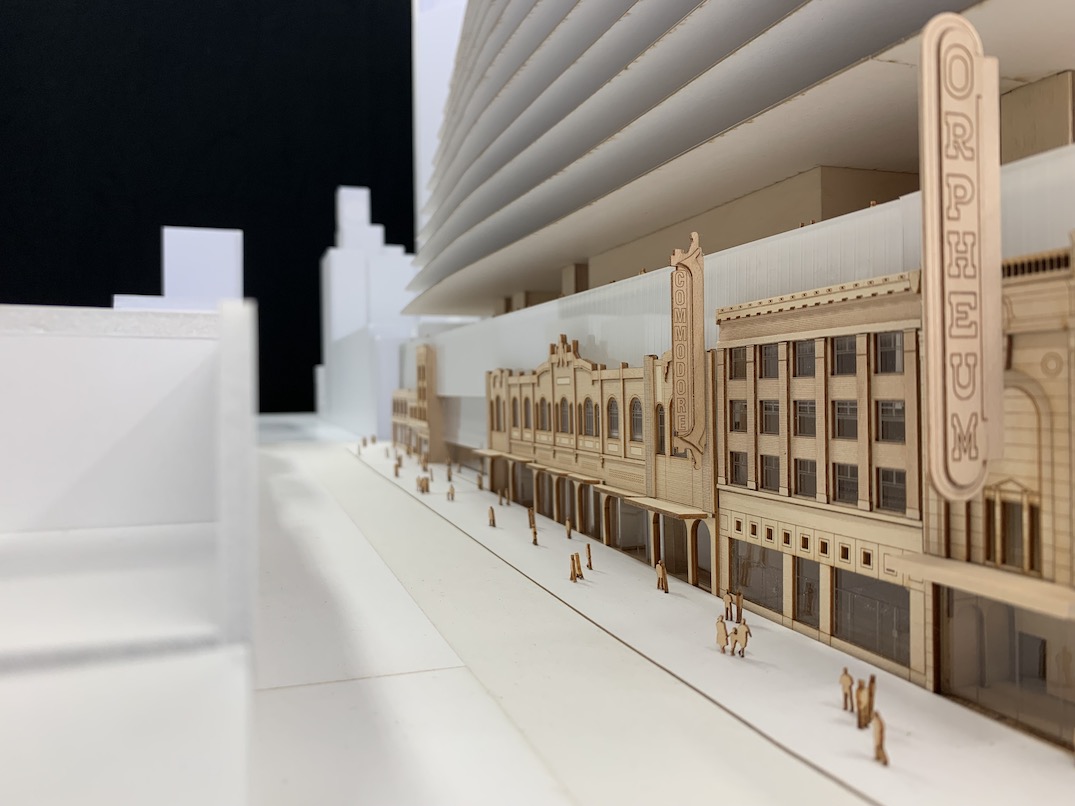 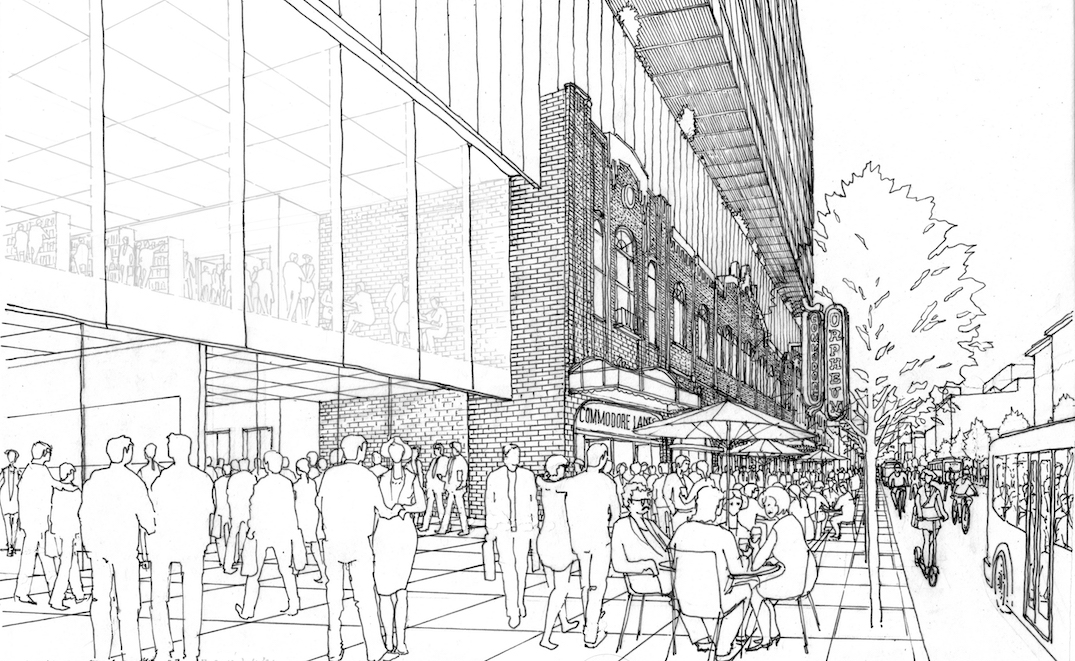 The proposed scale of such mixed-use projects with office, retail, restaurant, cultural, and entertainment uses is the norm in major cities like Toronto and New York City. The resulting density also enables the viability of interesting major destination businesses.

In the context of downtown Vancouver, it already suffers a major deficit of major purpose-built retail space, which has sent a growing number of retailers looking to expand into the Metro Vancouver market to the suburbs instead.

Even more curious is City staff’s weight on the importance of abiding with the City’s policies relating to Single-Room Occupancy (SRO) hotels, which prevents the loss of low-income housing. City staff brought to attention the presence of the State Hotel SRO within the development site, and the need to retain or replace its 73 units. But the State Hotel has not been seen residential uses for decades, and City staff in their report also admit all of the units are vacant. This is only an SRO by technicality, but not in actual practice.

When City Council deliberated City staff’s proposal to add rental and social housing on Granville Street in downtown in early 2021, it was agreed that residential uses are not compatible with the entertainment district given its excess noise and light.

By urging City Council to confirm that existing City policies should be upheld as outlined, City staff have not identified any path forward for the proposal. But it will be up to City Council’s discretion to determine whether City staff’s rationale makes any rationale sense, and what course the proposal should take.

At this juncture, the 800 Granville Street proposal is being considered under City Council’s 2021-mandated policy to City staff to send all proposals deemed to be “non-compliant” upstream for City Council’s final decision, rather than have the bureaucracy quietly determine the fate of such preliminary proposals behind closed doors.