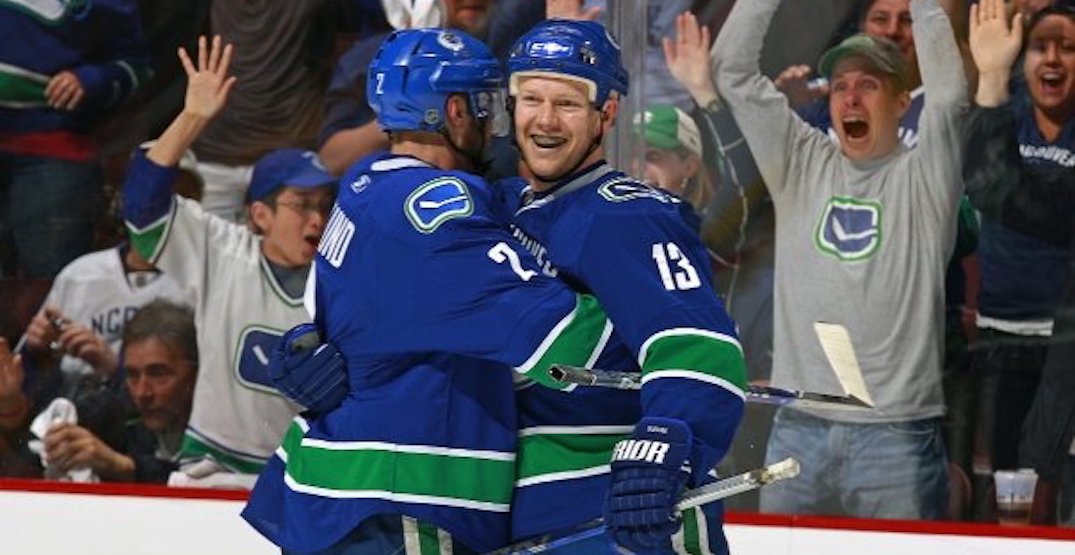 While some of you might hate the Toronto Maple Leafs, Vancouver Canucks general manager Jim Benning holds no ill-feelings towards some of their players.

Within the span of five days, Benning claimed two forwards — Jimmy Vesey and Travis Boyd — off the waiver wire from Toronto.

Those recent acquisitions beg the question, which other Maple Leafs castoffs have successfully found a home in Vancouver?

For the purpose of this list, we’re only looking at players that went directly from Toronto to Vancouver without stops in between. That eliminates some notable players like Duncan, BC native Russ Courtnall, goaltender Felix Potvin, NHL-banished Brendan Leipsic, and the Canucks’ first captain, Orland Kurtenbach.

The Canucks picked up 24-year-old Darby Hendrickson in 1999 in the midst of an awful season. Hendrickson averaged over 17 minutes a night with the Canucks to end the 1998-99 campaign, which signified just how awful they truly were at the time.

Hendrickson played one more season for the Canucks before being claimed by the Minnesota Wild in the 2000 expansion draft. What he’s known best for in Vancouver is scoring the game-winning goal in Game 7 of the 2003 Western Conference semi-finals… for Minnesota.

One of the most beloved coaches and general managers in club history was also an original Canuck during their inaugural season in 1970-71.

Despite the lore of Pat Quinn in this city, his impact as a player was much quieter than his impact behind the bench. He spent two seasons with the Canucks as the team toiled near the bottom of the standings.

Acquired: Traded to Canucks for Michael Carcone on December 3, 2018.

The most recent acquisition to appear on this list, Josh Leivo found some moderate success in an elevated role with the Canucks. He was a useful two-way player who hit a career-high of 19 points in 36 games in 2019-20. That was before he fractured his knee cap, which forced him to miss the rest of the season, including the bubble playoffs.

He hasn’t been as effective in Calgary this season, registering five points in 28 games to date.

During the 1996-97 season, Mike Ridley finished with an impressive 52 points, good for fourth on the Canucks. However, this was the first time in seven years that the Canucks failed to qualify for the playoffs. Despite Ridley’s modest success in Vancouver, he retired following this campaign.

Acquired: Traded with Dan Hodgson for Rick Lanz on December 2, 1986.

Before being named general manager of the Vancouver Canucks, Jim Benning was once a castoff from Toronto.

The defenceman then spent the last four seasons of his career with Vancouver before exiting the league (as a player) in 1990.

Acquired: Claimed on waivers from Toronto on June 25, 2008

Kyle Wellwood was considered a talented young player in Toronto, on a team that lacked youthful talent. However, a lack of production, injuries, and new management in Toronto led to the Windsor, Ontario native being placed on waivers in 2008.

It was there that Wellwood was scooped up by the Canucks. He had two moderately successful seasons with the Canucks in a third-line scoring role.

Wellwood still resides in Vancouver, and is an investor in Vancouver-based concussion research company, HeadCheck Health.

Acquired: Traded with John Grisdale for Dave Dunn on October 14, 1974.

After short stints with Montreal, Detroit and Los Angeles, Garry Monahan found his footing in the NHL as a useful, middle-of-the-lineup winger with the Maple Leafs.

Monahan had four successful seasons in Toronto before joining Vancouver at the beginning of the 1974-75 season. He was then part of the first-ever Canucks team to make it to the playoffs.

The Barrie, Ontario played in Vancouver for four more seasons, before becoming the only player on this list to re-join the Maple Leafs. He did so for the last season of his career in 1978-79.

I would garner a bet that even most Leafs fans who were watching in the 1970s don’t remember the name Gerry O’Flaherty.

The diminutive winger played just two games for the Maple Leafs before joining the Canucks in the 1972 NHL Intra-League Draft. O’Flaherty played in six straight seasons for the Canucks, surpassing the 20-goal mark on three occasions. He was also a part of the first Canucks team to make it to the playoffs in 1974-75.

Acquired: Traded from Toronto with Jerry Butler for Rick Vaive and Bill Derlago on February 18, 1980.

Arguably the most impactful Canuck on this list, Dave “Tiger” Williams was a beloved enforcer with some offensive prowess who spent parts of five seasons in Vancouver.

Even though he was a successful Canuck after being cast away from Toronto, it’s hard to say that Vancouver won the trade. Rick Vaive had seven 30+ goal seasons in Toronto, and he’s the Maple Leafs’ single-season record-holder with 54 goals in 1981-82.

Acquired: Signed as a free agent by the Vancouver Canucks on December 18, 2009.

Sundin joined a formidable forward group which included the Sedins, Ryan Kesler, and Alex Burrows in the prime, along with Slovakian sniper Pavol Demitra.

Although Sundin was unable to capture that long-sought-after Stanley Cup with the Canucks, he did have a pretty memorable moment against his former team.