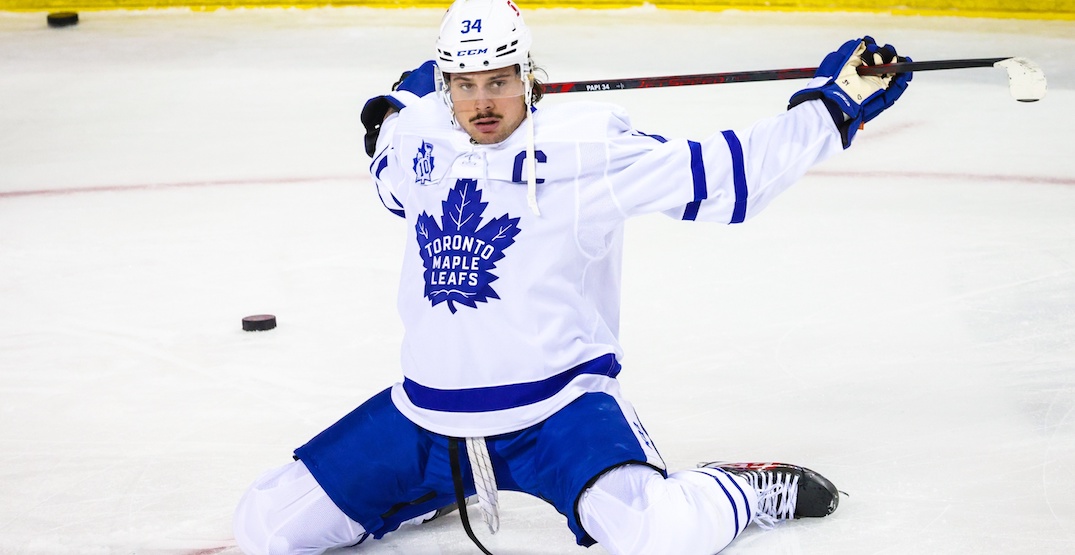 It’s hard to find a Vancouver Canucks fan who has a soft spot for the Toronto Maple Leafs.

However, many Leafs fans seem confused by the supposed rivalry.

This “rivalry” between the Canucks is intriguing, long-withstanding, and a little bit confusing.

Back in the 1990s, former Canucks defenceman Jeff Brown stated that one of the reasons for the rivalry was because Vancouver generally had younger fans than Toronto and that the team felt like the “red-headed stepchild” against the Leafs.

Well, the fans aren’t as young anymore, but the hatred is still there.

While it might be easy to poke holes in this rivalry, here are six current reasons why you should despise the Maple Leafs, as the Canucks prepare for three straight games against them, starting tonight.

On the ice, both Elias Pettersson and Auston Matthews are two of the most talented young players in the NHL. Both are number one centre in Canadian hockey hotbeds after both were drafted in the top five in back-to-back years.

Off the ice, however, the similarities begin to dissipate.

Even if both Pettersson and Matthews have an impeccable fashion sense, their sensibility outside the arena goes in different directions.

Back in 2019, Matthews was charged with disorderly conduct in Arizona for allegedly harassing a female security guard at 2 am, before he went on to moon her. The charges were later dropped.

Following that incident, Pettersson was busy donating his All-Star winnings. He even had the audacity to hand an opponent his equipment back in the middle of a game.

The bedsheet King himself, John Tavares has quietly been a thorn in the Canucks’ side over the years.

While he’s no Tyler Toffoli, he does have nine goals and 20 points in 16 career games against the Canucks.

It’s annoying enough that he’s been burying goals against Vancouver. However, Canucks fans can revel in the fact that they don’t have a captain that wants to jump ship.

The majority of us tend to hate it on the west coast when our home games are on at 4 pm, but that’s only the beginning of the Pacific’s annoyance with Toronto favouritism.

Being Canada’s largest city, it’s fair that the Leafs get the spotlight, but it still gets tiring after time. The bias appears to be worse ever since the loss of regional sports highlights back when Rogers purchased viewing rights of the NHL back in 2012.

Even when the Leafs were one of the worst teams in Canada (ironically, back when the Canucks were competing for Stanley Cups), they still received the lion’s share of the media coverage.

No worries, the west coast hasn’t forgotten Vesa Toskala and Jason Blake getting on the highlight reel before the Sedin twins.

This is about the only time that intense coverage of a mediocre Maple Leafs goaltender is acceptable.

4. The Stanley Cup argument from their fans

Any half-knowledgable Canucks fan is cognizant of the fact that Vancouver’s NHL history is bleak.

However, that bleak reality is shared by the Toronto Maple Leafs, especially over the last 51 years.

Nonetheless, I’m sure you’ve heard the “where’s your Cups” argument from a Leafs fan in your life. This, despite the fact that there were six teams in the NHL the last time they won hockey’s greatest trophy in 1967 — before Vancouver had even entered the league.

Neither fanbase should be bringing up Stanley Cups in a conversation. Let’s leave it at that.

5. Leafs have taken it to the Canucks recently

There was a stretch from 2003 to 2014 when the Leafs went winless against the Canucks.

I was in Ontario, hanging out with a bunch of Leafs fans on that dreaded night in 2014, when Mason Raymond, Phil Kessel, and James van Riemsdyk scored three straight in the third to end a decade-long winless drought against the Canucks.

Since then, the Leafs have had the edge over the Canucks. Vancouver is 4-8-1 against Toronto since 2014, with only two of those wins coming in regulation.

Although this is by no means considered one of hockey’s great rivalries, there have been some insidious feelings bubbling underneath the surface.

Then, in 2013, Phil Kessel had a hissy fit when Alex Burrows made fun of Kessel for a stick-swinging incident from the preseason against John Scott.

Nazem Kadri and Matt Martin then became the villains back in 2016. On the same night, Kadri threw a blindside hit on Daniel Sedin, while the hulking Matt Martin tried to fight diminutive rookie Troy Stecher.

There are a number of new characters on both teams since then, but the rivalry promises to pick up in 2021.

The last nine games between the Leafs and Canucks took place over a four-year span. Now, the next nine will be played in a three-month span.

With two of Canada’s three biggest markets set to battle for Northern supremacy, the reasons to despite Toronto will be plentiful and more pronounced in the months ahead.