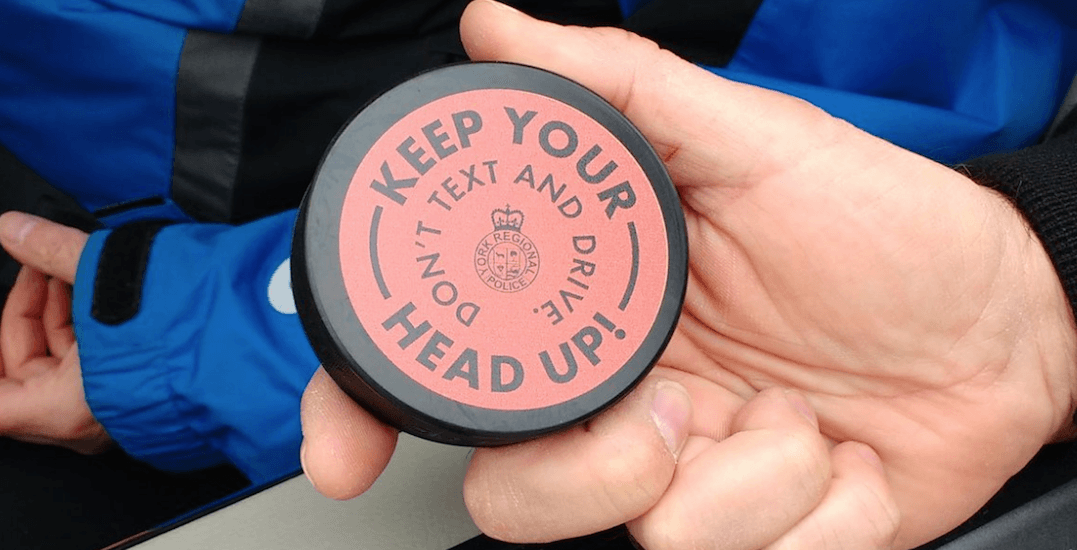 The York Regional Police Traffic Enforcement has just launched the ‘Keep Your Head Up’ campaign,  which pays homage to the trusted advice often given in hockey.

Our officers really do give a puck. Keep your head up and don’t text and drive. pic.twitter.com/T4BtdFSh1G

The campaign includes a hockey puck giveaway distributed by officers to citizens across the region and a series of videos to be shared on social media.

“Keep Your Head Up is the first thing young people hear when they learn to play hockey,” said Chief Eric Jolliffe.

“Coaches teach the consequences of inattentiveness and the increased level of safety that comes with being alert – the same principles we’re asking people to apply to driving.”

Since January 1, York Regional Police have laid a total of 4,994 charges for distracted driving where drivers were using handheld communication devices.

During the same time frame, there has already been 2,223 collisions where driver inattention was a contributing factor. Despite increased fines of $490 and six demerit points, drivers still continue to risk their safety and the safety of other drivers and pedestrians by being inattentive or using their mobile phones while driving.

So the next time you’re driving, do us all a favour and stay off your phone.