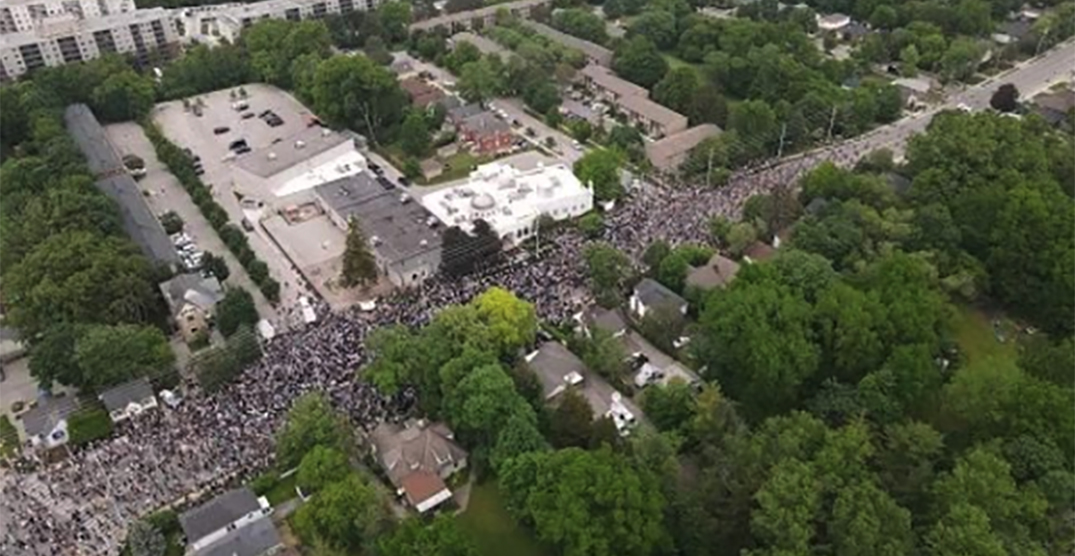 Thousands of people filled the streets of London, Ontario, Tuesday night to pay their respects at a vigil for members of a local family killed in a hate-motivated truck attack.

The London Muslim Mosque, which hosted the vigil, said more than 10,000 people came out.

“I’ve walked that trail that our London family walked on Sunday and never got to finish. Just like many of my friends and family have expressed to each other and on social media, it’s not just that it could have been me. It was one of us,” Nusaiba Al-Azem, vice-chair of LMM, said to the crowd.

The family of five was out for a walk on Sunday evening when a 20-year-old man ran them over with a pickup truck, targeting them because they’re Muslim. Parents Salman Afzaal and Madiha Afzaal, Salman’s mother, and their 15-year-old daughter Yumna Salman were killed.

The sole survivor is their son Fayez, who is recovering in hospital.

“We grieve for the upended life of a nine-year-old orphan,” Al-Azem said, adding members of her own family have asked whether they look “too Muslim” before leaving the house in the wake of Sunday’s attack.

People at the vigil took part in a prayer, where thousands of people knelt on the street.

“We’re not going to let hate intimidate us, scare us, or divide us,” Bilal Rahhal, chair of LMM, said. “We need to recognize that this is our city. We belong here. We are not going anywhere.”

Prime Minister Justin Trudeau attended Tuesday’s vigil, where he expressed his support for the community.

“Tonight, we are all friends of the Afzaal family. We are so sorry for your loss,” he said. “There are no words that can ease the grief of having three generations murdered in your neighbourhood.”

To those who knew the Afzaal family, to the son who survived, to Muslims in London and in communities across Canada, to everyone who feels sad or angry or afraid: You are not alone. Canadians across the country are mourning with you and standing with you – tonight, and always. pic.twitter.com/MqMj1kKeTC

COVID-19 gathering restrictions were temporarily relaxed in London to allow for the vigil to take place.

Those interested in donating money to support the surviving boy can do so through the online fundraiser organized by the mosque.