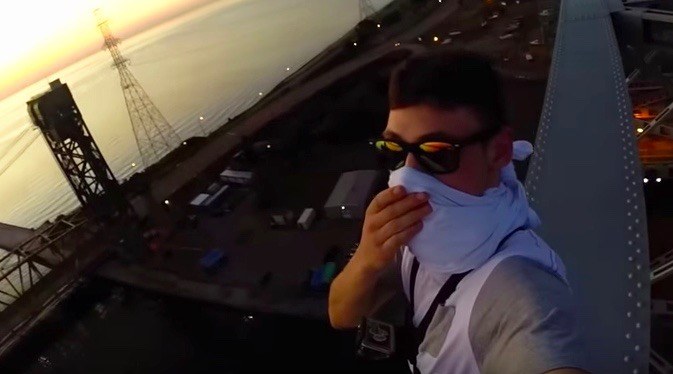 We don’t like to call people idiots a lot.

But sometimes they just really, really earn it and there’s nothing we can do but bestow on them the label they’ve worked so foolishly to deserve.

In a video uploaded to YouTube on Monday (under the name idgaf brand – like we said, this guy’s a gem), a young man jumps out of a stopped car on the Burlington Skyway (stopping your car on the bridge is already a dangerous move) and scurries up a support beam with selfie stick in hand.

Darwin would be proud.

For those of you not familiar with the Burlington Skyway’s impressive stats, here are the only two you really need to know to understand how stupid a stunt this was:

Pausing at the top to put on a pair of shades, the young man then walks around the top of the bridge via support beams, balancing above those fast moving lanes of QEW traffic passing beneath him at, literally, killer speeds.

Then, as a coup de grâce, dude turns the camera on himself to show his bandanad and sunglassed face (he looks about 14). What a real cowboy.

Oh, and the entire time he’s up there he appears to NOT BE WEARING A HARNESS.

Like, we said, he earned his own nickname on this one…