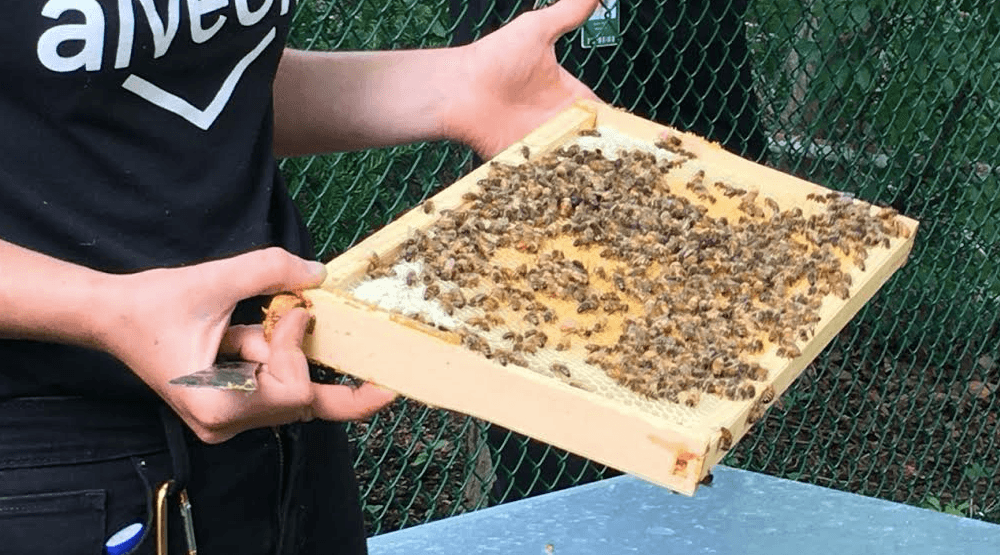 Bees are taking over downtown Toronto, in the best way possible.

Manulife revealed a new apiary located behind its offices at 200 Bloor Street East on July 10. The apiary contains two bee hives and the new project is part of Manulife’s sustainability efforts. The company also has eight hives in Montreal, and all ten hives contain a total of 500,000 bees.

“We recognize that a healthy environment is vital to the long-term well-being of our business, our employees and the people we serve around the world,” Shabeen Hanifa, spokesperson for Manulife, told Daily Hive.  “With environmental pressures mounting, including the effects of climate change and dwindling natural resources, we’re taking action in areas where we can have the greatest impact.”

Hanifa said that company wanted to bring bees to their Toronto grounds because of the large diversity of pollinating plants near the building.

The Manulife Real Estate team contracted Alvéole, an urban beekeeping company, to have honeybees housed on Manulife’s global headquarters in Toronto and their properties in Montreal.

The Toronto hives are placed in fenced area but can be viewed by employees and the public who walk along a path behind the Manulife offices on Bloor. An easy way to spot the hives is to look for the greenhouse and the hives are located right next to it.

Hanifa suggests keeping a distance from the hives as this is the bee’s busy season in pollination.

Wondering what all the buzz is about with our newest “employees”? Find out: https://t.co/6Sa3IMVMDU #ONpollinator pic.twitter.com/ZL0jVwJOGp

Not your everyday nursery in @Manulife gardens. Thanks @alveolebuzz and Blake for the amazing tour of the hives. #pollinators #bzzzzz pic.twitter.com/Qsfwq7nWzw