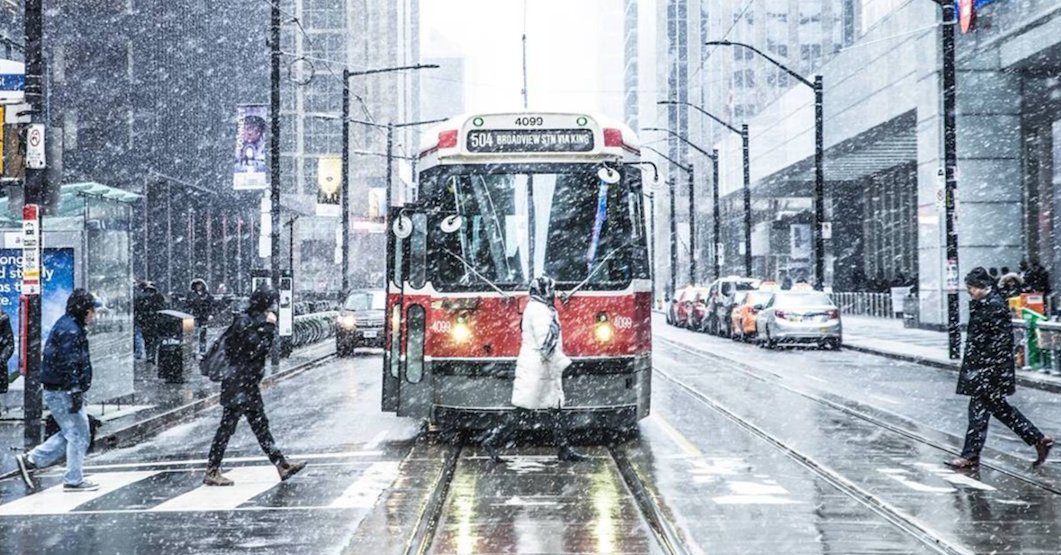 While many were complaining about transit delays caused by Monday’s winter storm, others took the time to thank TTC drivers.

The storm smashed a previous snowfall record for January 28, set in 2009. A decade ago, 13.4 cm fell across the city, while yesterday, a whopping 26.4 cm landed on Toronto.

And of course, the snow caused plenty of delays across the transit lines, even resulting in the suspension of Line 3.

But this didn’t stop us from being Canadian.

Many transit users took to Twitter on Monday, and into Tuesday, to thank the TTC staff for getting them to their destinations safely.

Toronto City Councillor Joe Cressy was among the grateful.

“To the TTC bus driver who got me home safe today in this crazy weather, and all the TTC operators doing the same in every neighbourhood, thank you so much,” he tweeted.

To the #TTC bus driver who got me home safe today in this crazy weather, and all the TTC operators doing the same in every neighbourhood, thank you so much.

@TTChelps you are the lifeline of Toronto. A big round of applause for all TTC drivers, operators and staff who helped thousands of people along with me to reach home safely.

TTC driver on bus 8099 Kipling SB express is awesome, this morning she was so accommodating when the world has seem to gone array. Great work driver Id#75291. Due to the snow storm, I left my car at work & took the subway home. Now this morning this Angel, always humanity first!

@TTChelps #bus3444route995#AsaluteToTheBusDriverMike
In times like this snow storm, commute time was terrible but despite of all those delays, our bus driver was very nice, kindhearted to the commuters, we thank you for that!👍🏻👏🏻 pic.twitter.com/SVTNEb3CXS

I came from Japan so I’ve never met like a this things so actually I was surprised today’s TTC and bursted into tears. But finally i arrived at home reasons why TTC drivers and staffs had a lot of efforts. Shout out to all the drivers and staffs. Thank u so much:)@TTChelps

Usually use twitter to complain about #TTC, but on a night like tonight, we are beyond the usual problems of our aging system. Instead, I must give a huge shoutout and massive kudos for driving through this storm in the best way they can! Thanks @TTChelps.

Big thanks to heroic @ttc drivers getting us home on a very messy drive!

Thank you @TTChelps, knowing how bad the weather is and still being able to run. Really appreciate the service esp the driver on the platform at finch station. He did his best 👍#ttc

On this very wintery evening in #Toronto, the #TTC gets us home. @TTChelps pic.twitter.com/FwhBBx2r5K

Huge shout out to all the @TO_WinterOps City workers and @TTChelps TTC workers this morning. Doing their best in difficult conditions on long shifts.#SnowTO

So the folks on the road at @TTChelps are the real heroes today 💪💪 Getting to work in this whether is not an easy task to say the least. pic.twitter.com/1JC8USS3aV