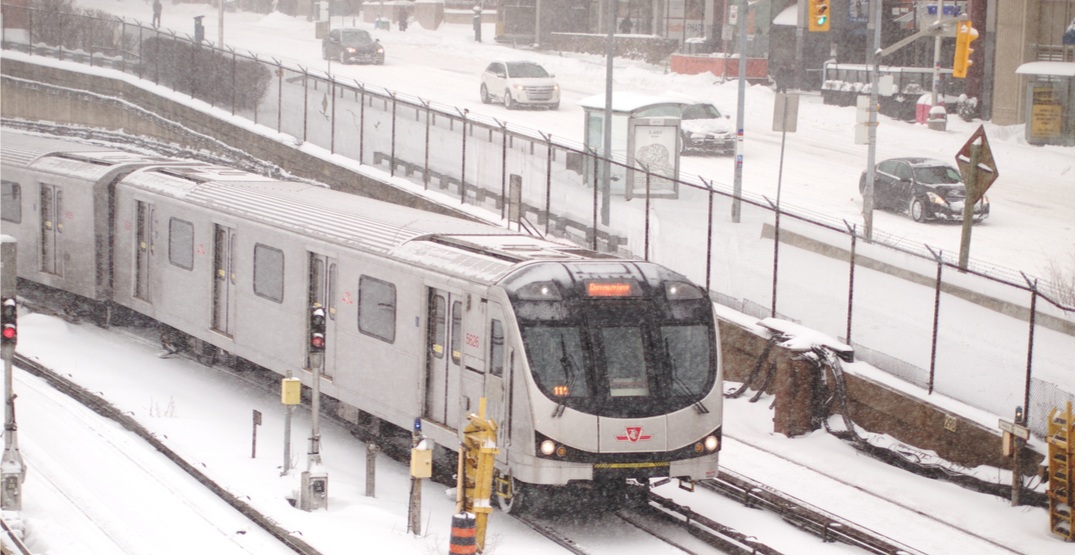 Those heading out on Tuesday can expect delays when it comes to transit across Toronto.

According to Environment Canada, Toronto was expecting 15-20 cm by end of day Monday. And the snowfall caused chaos in the city as it continuously fell from morning well into the early hours of Tuesday.

Due to the weather, the TTC stopped running Line 3 in Scarborough, and over 300 flights were delayed at Pearson Airport… and this remains the case this morning.

Line 3 is still being replaced by shuttle buses, as widespread delays continue on the TTC.

Line 3 Scarborough RT: Shuttle buses are running in place of RT service today. This is due to the heavy build up of snow. Plan for extra time on your commute.

But delays are also experienced along Line 2, where shuttles are running between Woodbine and Warden Stations, due to a signal issue at Pape Station.

Line 2: Shuttles are running between Woodbine and Warden Stations this morning so plan for extra time. There are minor delays of up to 15 minutes along the rest of the line due to a signal issue at Pape. #TTC

Streetcars are operating but there is build up on the rails, so they will be travelling slower than usual. There are added buses along some of the busier streetcar routes.

Streetcar routes: We have full service on all lines with no diversions at the current time. Please plan for extra travel time due to snow build up on the rails and general slow traffic on most routes. We have added buses to the 501 and 506 to supplement service.

As for air travel, almost 200 flights have been affected by cancellations at Pearson Airport this morning.

“Winter weather conditions continue to impact flight schedules into the overnight period,” said the airport on Monday night. “Delays and cancellations are possible into the morning as a residual effect from today’s weather.”

Over 100 arrival flights were cancelled and more are potentially expected throughout the morning.

Winter weather conditions continue to impact flight schedules into the overnight period. Delays and cancellations are possible into the morning as a residual effect from today’s weather. Please check your flight status with your airline before heading to the airport. #onstorm pic.twitter.com/yaLPs8Zegw

Whatever you do out there today, give yourself some extra time on the road, it’s still slippery and it’s also very cold.