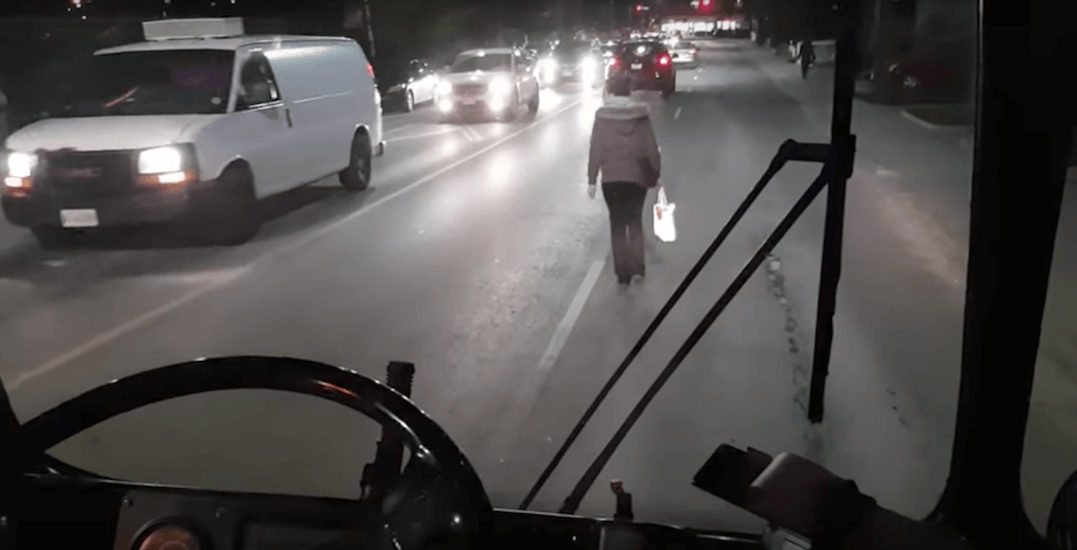 If you were in the city last Friday, you know how cold it was.

Which is why you would understand how frustrated someone might be after waiting 30 minutes in the cold for the bus to arrive only to be told that it’s too crowded to board.

And according to a recently uploaded video on YouTube, a Toronto woman didn’t just become frustrated when this happened to her, she decided to protest the situation on a busy street Friday night.

The video, shot by TTC commuter Andreas Wesley, shows the woman walking north on Landsdowne Avenue in the right-hand lane during rush hour. According to the video description, there were two buses, each crowded with about 100 passengers driving behind her.

According to Wesley, after two buses failed to arrive at Lansdowne Station, hundreds of passengers crammed onto two busses as soon as they arrived. When the driver of one bus asked a handful of people at the front of the bus to get off because he couldn’t see the door, this woman decided to take matters into her own hands.

What follows is rather entertaining, as whenever the bus tries to move into the left lane to pass the woman, the woman moves into the middle of both lanes, completely blocking the bus.

You can hear the passing traffic honking at the woman, who responds by waving at the cars as they drive by.

The driver of the bus can be heard on the phone with the TTC saying, “I’ve got a disgruntled customer who is walking down the middle of the road holding up traffic, not letting me pass,” the driver says. “As I try to change lanes, she’s walking in front of me.”

“I’ve got an absolutely packed bus, I had to leave her on the sidewalk because I had no room for her. I’ve got another bus behind me, and we’re just sort of creeping along.”

The bus continues driving two blocks until it reaches Wallace Avenue, where a number of passengers exited the bus. Now if only she had walked ahead politely to the next stop, rather than in the middle of the road wasting everyone’s time, she could have gotten her ride home after all.

So far, no official word from the TTC has been released on the incident.