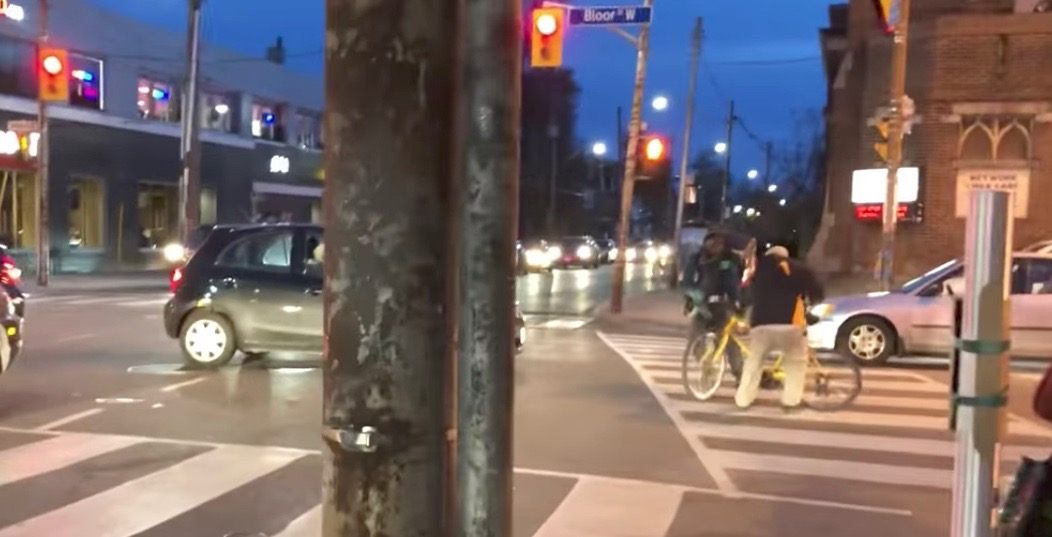 According to a recently uploaded video to YouTube, last night at 5:30 pm on the corner of Bloor and Ossington, a fight broke out between a food delivery cyclist and a driver.

In the video, that has since been removed, it appears the car is attempting to make a right turn from Ossington onto Bloor and the cyclist feels he’s being cut off. Words were exchanged according to the original uploader of the video:

Bloor and Ossington. Saturday, November 11, 2017 17:29, Cyclist has stopped beside the car-yelling at the driver. The guy opened window and cyclist said something like “It was red! Is it worth it for you going through red?” The driver responded (Polish or Russian accent) F** you, etc.

Things escalate quickly from there, with the cyclist hitting the car’s side mirror. The car then continues with its right turn, nearly hitting the cyclist again. The cyclist then uses the wheel of his bike to smash the side of the car several times.

The car moves on out of frame while the cyclist check his bike, but very quickly the driver of the vehicle approaches the cyclist and things get physical. The driver demands the cyclist’s ID, holding onto his bike while the two fight over it and pull each other into the middle of the busy intersection.

One onlooker yells, “We’re calling the police,” while another bystander approaches the two men.

No official word from police has been released on the incident.

The same video has been uploaded by another party: