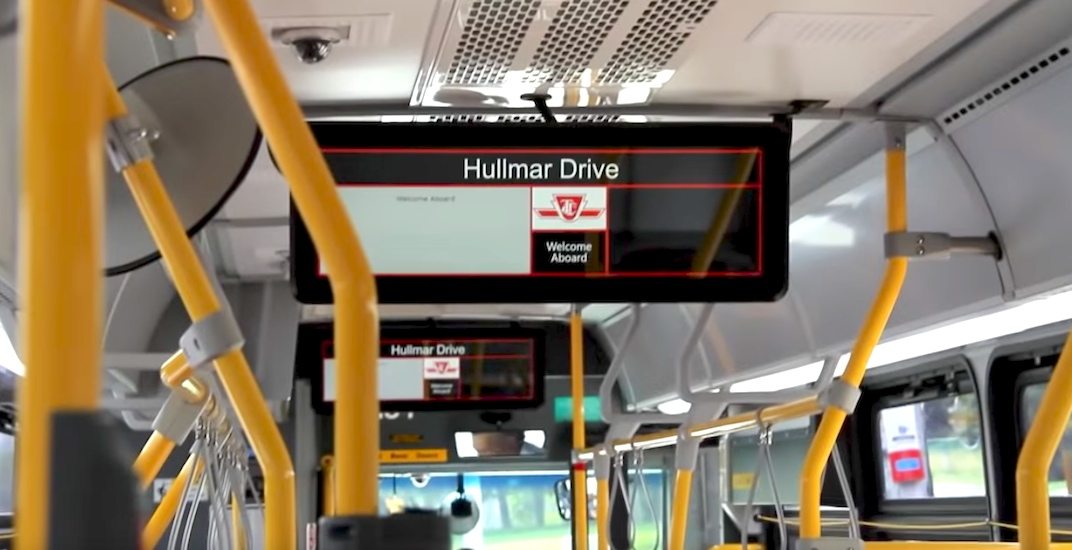 Inside a new TTC bus with an LCD screen. (TechnicaProductions / YouTube screenshot)

Toronto transit riders can look forward to another creature comfort while on transit as the Toronto Transit Commission (TTC) reaches the next level for electronic display signs on buses.

The TTC says LCD screens will be a new feature coming to the transit agency’s next order of buses arriving over the next two years, with 325 buses this year and 200 in 2019 outfitted with the screens.

TTC spokesperson Stuart Green told Daily Hive each of the new buses will have a pair of 29″ screens mounted onto the ceiling to display basic information, such as stop names and the current time.

But this is not another platform for advertising, he says, as it will only display information that passengers need for their travels on transit. This is not a platform for streaming movies, either.

“We are in the process of working with customers and stakeholders to design the screen layout, but they will eventually include things like route, next stop announcement, confirmation of stop request, customer announcements, service alerts – information we have found is most valued by customers based on our research,” said Green.

The cost of the screens and the installation is $1,750 per bus, which is just a small fraction of the overall total cost of a new bus. A two-door, 40-ft-long bus is about $500,000 while an articulated, three-door, 60-ft-long bus is roughly $1 million.

Transit bus systems in New York, Berlin, Singapore, Hong Kong, and across Japan also have LCD screens inside at least some of their buses, although some of these systems use it for advertising as well.

Earlier in the year, the TTC also announced 200 new buses arriving this year will be outfitted with USB ports to allow riders to charge their mobile devices.