There are more people riding the King Streetcar, according to the TTC.

And two months into the one-year pilot, the TTC is reporting a ridership increase of 25% on the King Streetcar. It also said that initial analysis shows ridership on adjacent streetcar routes is stable.

According to the City of Toronto’s monthly data, this increase is based on an observed spike in volume from 2,100 passengers to 2,600 passengers eastbound at the peak location of Spadina Avenue.

“I am thrilled to see the early positive ridership data from the pilot,” said TTC Chair Josh Colle in a statement. “I commend the City and TTC staff for this innovative solution to making King move again.”

Just two months into the #KingStreetPilot, the #TTC has reported a ridership increase of 25 percent! pic.twitter.com/Uq5WxsM16z

But Richard J. Leary, Acting Chief Executive Officer, said that with the ridership increase, some customers aren’t able to get on a streetcar during peak travel time.

“We are a bit of a victim of our own success, too, as we have also seen a ridership increase of some 25% on King St., meaning some customers are unable to board their first or even second streetcar in the peak of the peak,” said Leary in his first CEO report. “Travel time, reliability and ridership will be used by the TTC to gauge pilot success.”

The transit agency said that it will be adding new streetcars to meet ongoing demand, and will continue to made adjustments to ensure the pilot is a success. 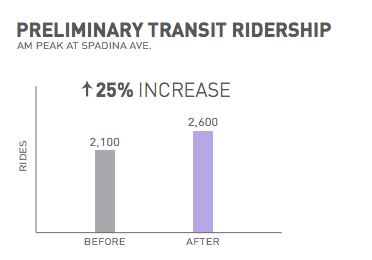 “We will continue to work with the City to monitor the pilot and do all we can to assist business in the corridor,” said Leary. “But as of writing, the TTC is extremely pleased with the positive impact the pilot is having for customers.”

Earlier this week, after hearing from local businesses, the City said it would be introducing warming stations, ice sculptures, fire performers, and art installations along the King Street to bring pedestrian traffic back to the area.

The City will also be promoting “Eats on King,” a new program launching with restaurants in the pilot neighbourhood. Described as similar to Winterlicious, Eats on King will start on February 19 and run until March 29.