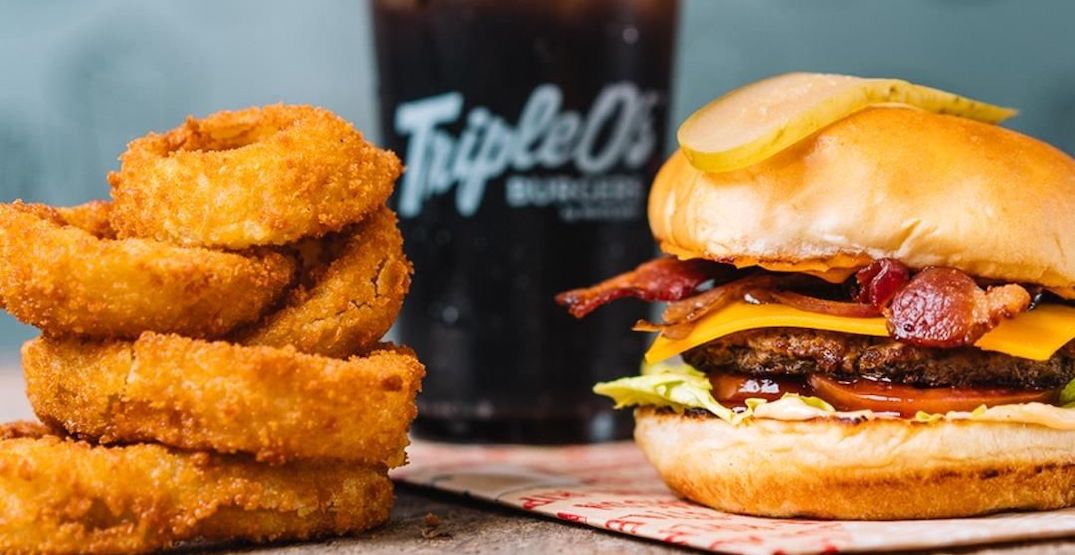 West Coast meets Ontario in a delicious new announcement! The fast-food franchise Triple O’s has opened its first location in the GTA.

A first for the region, Triple O’s is a fan favourite when it comes to burgers, fries, and shakes. Its restaurant is now open at 1520 Courtneypark Drive East, Mississauga.

“I can’t tell you how many times guests, potential franchisees, and even famous ex-pats living in Ontario ask us when we plan to open a restaurant in the province,” said Triple O’s and White Spot President Warren Erhart.

“Well, that day has come in a major way. This is a competitive burger market, but we stand by our unparalleled taste that has converted legions of burger lovers alike.”

According to its press release, in addition to free-standing locations, Triple O’s drive-thru restaurants will be located at Pioneer and Ultramar gas stations as the company has an existing tie with Parkland Fuel Corporation.

Triple O’s praises themselves on their 100% fresh Canadian beef burgers, served with its iconic pickle on top. Their other classics include their hand-scooped milkshakes, fresh-cut fries and Secret Triple “O” Sauce.

The plan to open in the province has been in the works for quite some time now as Triple O’s was set to open in the summer of 2020 but was pushed back six months due to the pandemic.

“Nobody’s business plan included a pandemic, and we had to adjust our timing and market entry,” said Erhart. “However, what we’ve learned in the ensuing time is invaluable. People want taste and quality but also safety and convenience. They are more comfortable going to a drive-thru or using food delivery services for safety. That’s what we are offering – a better burger experience, but with quick-service speed, enabled by technology.”

The franchise plans to open six GTA locations and 30 in Ontario over the next five years.

The next restaurant to open is on Zenway Boulevard in Vaughan this April, then one in Toronto, a second in Vaughan, and another in Hamilton.

The company will also be operating its 30 ft mobile restaurant, “On The Go Truck,” serving its famous offerings.

Triple O’s, a spin-off of White Spot Restaurants, Canada’s longest-running restaurant chain since 1928, now has 71 burger restaurants in Canada and Asia that have been steadily growing since 1997.