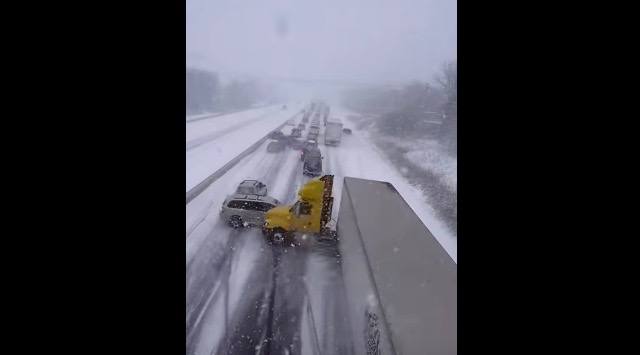 It was rough out there on the 401 over the weekend.

On Saturday, more than 100 collisions were recorded, and the OPP was forced to close the 401 in both directions at Bowmanville for several hours. While many were taken to local hospitals to be treated for minor injuries, no major injuries were reported.

Most terrifying however, was the moment a tractor trailer jack-knifed and rolled-over, slamming into several cars and trucks. The scary moment was captured on video by YouTuber Aaron C. the full two minute video can be viewed below. The collisions begin around the 1:40 mark.

This pile up was directly responsible for the highway needing to be closed.

When asked in the comment section why he “sound[ed] happy when the crash was about to happen,” Aaron C explains that:

…it was more of a adrenaline rush. I had just gotten off the highway coming from bowmanville and the same thing had already happened by the weigh station on the west bound lanes before liberty st exit and i thought a big rig was going to jump the centre and hit me so i decided to get off the hwy and head back home in bowmanville, i was already shaking like a leaf so