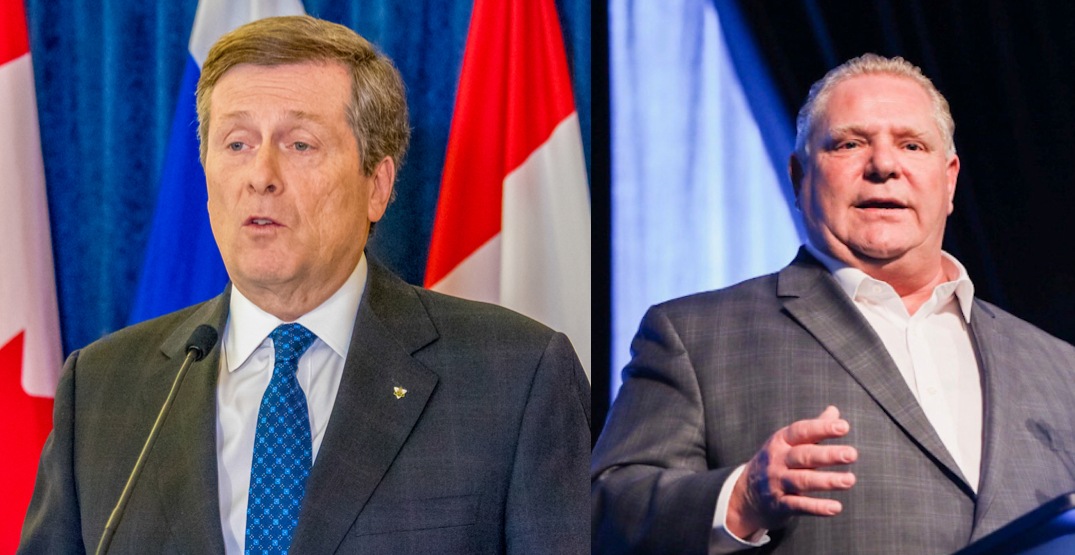 Just over three weeks ago, before the Easter long weekend, the Ford government announced it was slashing $1-billion in funding to Toronto Public Health over the next decade.

And as the 2019’s Ontario Budget became clearer, Toronto Mayor John Tory expressed his concerns over Doug Ford’s cuts, making it clear that a fight is now on against the province.

During a speech at the Scarborough Business Association on Monday, Tory pledged to oppose the public health cuts, calling it “very ill-advised budget cutbacks.”

“Healthy cities are successful cities – which is why I have opposed the proposed hundreds of millions of dollars in retroactive cuts to Toronto Public Health which will put school breakfast programs, vaccination programs, water quality testing, infectious disease control, and restaurant inspections at risk,” he said.

Besides public health, Ford’s government also cut roughly $85 million dollars this year from the child care system in Toronto. City staff advise that more than 6,000 child care subsidies are at risk for families who need those subsidies to make child care more affordable for them.

“These are all things that must be protected in order to protect our city, our province and our country’s success,” Tory told the crowd.

“I am deeply concerned that a provincial government so crucial to our economic success will ignore these warnings and harm the City of Toronto goose that lays the golden eggs, a city which must continue to lay those golden eggs for the benefit of all Ontario.”

Breaking. The Mayors and Regional Chairs of Ontario (MARCO), with a combined population of nearly 10 million people, have now formally opposed the Provincial Government’s cuts to public health. In nearly every community in every corner of Ontario people are opposed to these cuts. pic.twitter.com/G5HY5BDJYD

Tory then ripped into the Ford government, saying there were no consultations, “just unilateral retroactive letters, emails and phone calls – not the behaviour you would expect from partners.”

He also added that, “instead, the Premier openly questions our desire to find efficiencies and make better financial decisions.”

The Mayor said that Toronto was treated more harshly than other cities or towns in Ontario. But he said he is still dedicated to working with the province and the federal government.

“We have repeatedly indicated our willingness to sit down for a genuine discussion of these issues. But so far there has been no willingness whatsoever to have those discussions and that’s why you’ll see me standing up for Toronto day in and day out when the province refuses to work with us on many of these issues, seemingly preferring instead to send frequent emails and letters informing us of unilateral cutbacks,” he said.

Tory’s commitment in the coming days will be engaging with MPPs, businesses and local residents to call on the province to stop the cuts that will “take Toronto backwards.”

In response, Ford issued a statement reportedly accusing Tory of “irresponsibly wading into provincial issues he is neither involved in or understands.”

Additionally, Ford said that Toronto is spending “millions of dollars to water dead tree stumps and hundreds of thousands of dollars on car fleets that collect dust,” but complains about not having enough money for public health.

“Perhaps Mayor Tory should find time to sit down with his Auditor General and find some value for taxpayer’s dollars,” Ford said.

At this challenging time, I’m grateful to be working with some
remarkable colleagues here in Toronto & from across Ontario. Mayor Tory & I have a common cause- Toronto. Doug Ford, as harmful & divisive as he is, has brought those of us who care about our communities together.

The City of Toronto is not alone in opposing Ford’s cuts.

“Public Health services are vital to the health of every single Ontarian. They save lives today, and tomorrow,” said Councillor Cressy, Chair of Toronto’s Board of Health, last month. “These cuts endanger the health of our communities, and they must be reversed.”

Cressy is among the councillors in Toronto standing by Tory’s fight.

On Monday, The Toronto Board of Health unanimously approved Cressy’s motion to oppose the province’s cuts to public health, to call on them to reverse the cuts, and to launch an advertising campaign to inform Torontonians of the health risks if the cuts are implemented.

The Board of Health has unanimously approved my motion to oppose the Province’s cuts to public health, to call on them to reverse the cuts, and to launch an advertising campaign to inform Torontonians of the health risks if the cuts are implemented. pic.twitter.com/RlD9ZGylrC

“I commit to you here today that I won’t let our city be pushed backwards,” said Tory. “A healthy, vibrant Toronto with strong services and disciplined taxation is good for all the people – the people of Toronto, the people of Ontario, and the people of Canada.”