Mayor John Tory announced city staff have planned a way to accelerate the completion of the relief line “at least” two years faster.

However, the acceleration will come with a cost, adding $162 million to this year’s TTC capital budget.

The advanced timeline means the south portion of the relief line would be completed by 2029 opposed to the current target of 2031.

“Even after this acceleration we are going to continue to work with all our transit partners to continue to expedite the relief line,” said Tory at a press conference at Pape Station Thursday morning.

Councillor and TTC Chair Jaye Robinson says the project will divert 2500 people from the overcrowded Yonge line every hour.

City council has yet to approve the new funding.

The relief line is a future rapid transit line that would relieve overcrowding on the Yonge Subway Line, and provide riders with more travel options.

Last fall, the Ontario government gave the City of Toronto and Metrolinx the green light to move ahead with the downtown relief line following an environmental assessment. 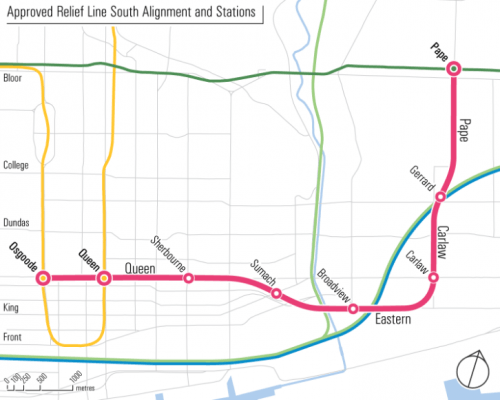 Ford says the upload of the subway would help the province to implement a more efficient regional transit system, reduce costs and build transit faster.

It’s good news that City wants to add $162 million to #TTC capital budget to speed up #ReliefLine. But @fordnation‘s plan to steal our subway system will delay it, especially if we have to wait for private sector to build stations. The $6.8 billion+ project is not yet funded. https://t.co/YaUQQvlUzX