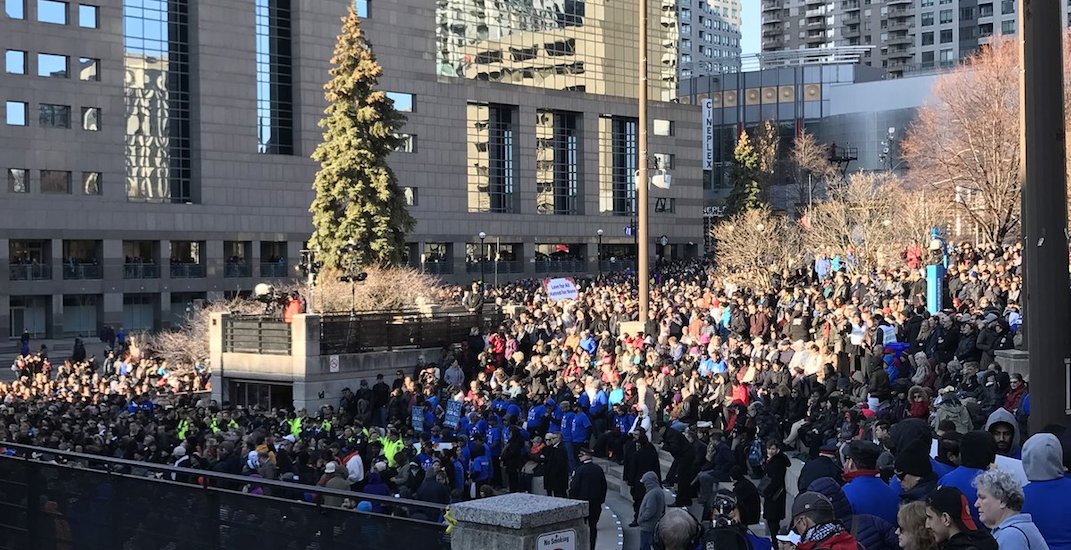 On a crisp Sunday evening, thousands of Canadians gathered for a march and vigil to remember the 10 people killed last Monday when the driver of a rental van mounted the sidewalk of Canada’s longest road, Yonge Street, and ruthlessly plowed down more than two dozen innocent pedestrians.

The evening started with a march of solidarity down Yonge Street, as the public retraced the path of the van’s destruction.

The march was led by a singing choir, followed by people carrying signs that read #TorontoStrong and other messages of resilience, showing the world that this vicious attack of hate won’t define who we are as a city.

The flood of people marching down Yonge Street stretched across one side of the street to the other and was joined by top officials including Prime Minister Justin Trudeau and Mayor John Tory.

Tonight, Toronto – and all of Canada – remembers and mourns together. #TorontoStrong pic.twitter.com/RviznRj0Bh

Marchers made their way to Mel Lastman Square — which was near where most of the victims were injured last Monday — where they were greeted by hundreds of residents who filled bleachers and packed into the square to pay their respects.

On a chilly evening we all gather for a vigil with a universal message of “Love for All Hatred for None”#TorontoStrongVigil pic.twitter.com/HffCoKYZkS

The City of Toronto and various interfaith groups co-hosted the vigil, offering the crowd words of compassion and courage.

Many speakers commended emergency service personnel for their work on Monday, including officer Ken Lam who was able to arrest the suspect without firing his gun.

Choir performances and music from the Red Spirit Singers, a group composed of Indigenous people, broke up the speakers throughout the night.

Other politicians were in attendance including Ontario Premier Kathleen Wynne and federal NDP leader Jagmeet Singh.

Today we mourn such senseless loss of life #TorontoStrongVigil

We must commit ourselves to gender equality & to ensuring violence of this nature never happens again. pic.twitter.com/Qn3EVRTqEe

This tragic week has united us in our grief. We worship in many different ways, but many of us seek the same ends: To care for those who are hurting, to comfort those in pain, to mourn those who left us too soon & to seek answers in the wake of a senseless act #TorontoStrongVigil pic.twitter.com/SPyWr2SzPi

On Friday afternoon, police officially confirmed the names of all eight women and two men who were killed in the van attack. The victims ranged in age from 22 to 94 and included two foreign nationals, a student from Korea and a man from Jordan.

As of Sunday evening, the city-organized #TorontoStrong fund for the families of those affected had raised more than $1.8 million.

Alek Minassian, 25, of Richmond Hill, has been charged with 10 counts of first-degree murder and 16 counts of attempted murder in the incident.

Minassian’s next court appearance will be May 10.