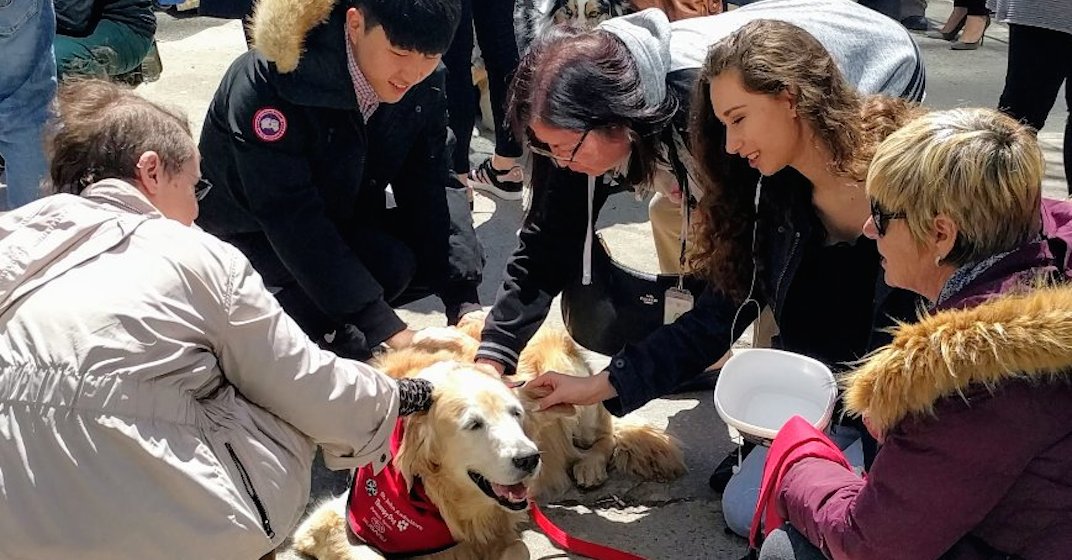 Four days after a van tore through Yonge Street killing 10 and injuring 14 more, a group of therapy dogs paid a visit to those affected by the tragic attack.

St. John Ambulance first brought more than a dozen therapy dogs to visit some of Monday’s first responding police officers before bringing the dogs to Mel Lastman Square to provide comfort and companionship to mourners.

Toronto’s Finest says Chief Mark Saunders @marksaunderstps in just released statement, he’s proud of em and their training. Time to give a little unconditional love to men & women in Blue , Service dog comes thru 4 them pic.twitter.com/LrPVQ3k61w

If only for a few moments, the dogs put smiles back onto the faces of those affected by Monday’s violent attack, which has shaken not only the city of Toronto but the people and businesses that call the Yonge and Finch area home.

The St. John Ambulance volunteers and therapy dogs will be visiting Mel Lastman Square again this Friday until 1 pm.

Lots of hope, love and positivity at Mel Lastman Square. Thanks to everyone who brought out their therapy dogs #YongeandStrong pic.twitter.com/RrnTzLTcLs

Thank you @stjohnambulance for having therapy dogs in Mel Lastman square today. What a great way to support the community to take back our space and be okay with stepping outside again #TorontoStrong pic.twitter.com/HKVf1P2UCE

#TorontoTogether at Mel Lastman Square, #Unity not division and those that seek to divide. pic.twitter.com/apvdv7gNDo