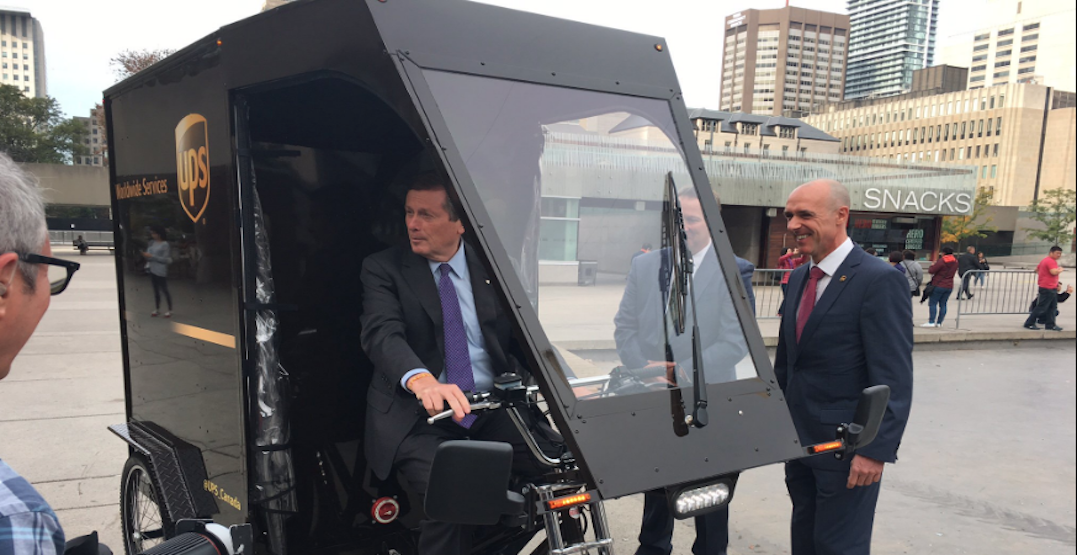 Mayor John Tory has announced that the city of Toronto will be partnering with UPS Canada to bring a cargo bike pilot to the city in which deliveries will be done by bicycle.

Joined @UPS_Canada for launch of cargo bike pilot – a first for Canada. UPS taking on an innovative project to see deliveries done by bike. #getTOmoving pic.twitter.com/pvm1QJ6Rc4

Mayor Tory made the official announcement this morning at Nathan Phillips Square, saying that it’s a good step forward for the city.

Mayor @JohnTory delivers remarks at the unveiling of our #UPS pilot project and #TOCargoBike pic.twitter.com/AoVAavbTyj

Traffic and congestion are currently two of the main concerns for Toronto residents, especially when large courier trucks are parked in bike lanes or taking up lanes of traffic.

Tory said the UPS cargo bike pilot, which was designed to improve urban delivery, will help ease some of these frustrations that Toronto drivers face daily.

UPS has already deployed this cargo bike pilot in several European cities, which has proved to work well.

“I applaud UPS Canada for launching this forward-thinking initiative. We all have a part to play to get Toronto moving,” said Mayor Tory.

I applaud @UPS_Canada for launching this forward-thinking initiative. We all have a part to play to #getTOmoving.

This move is just another reason why Toronto is one of the most innovative cities in the world.