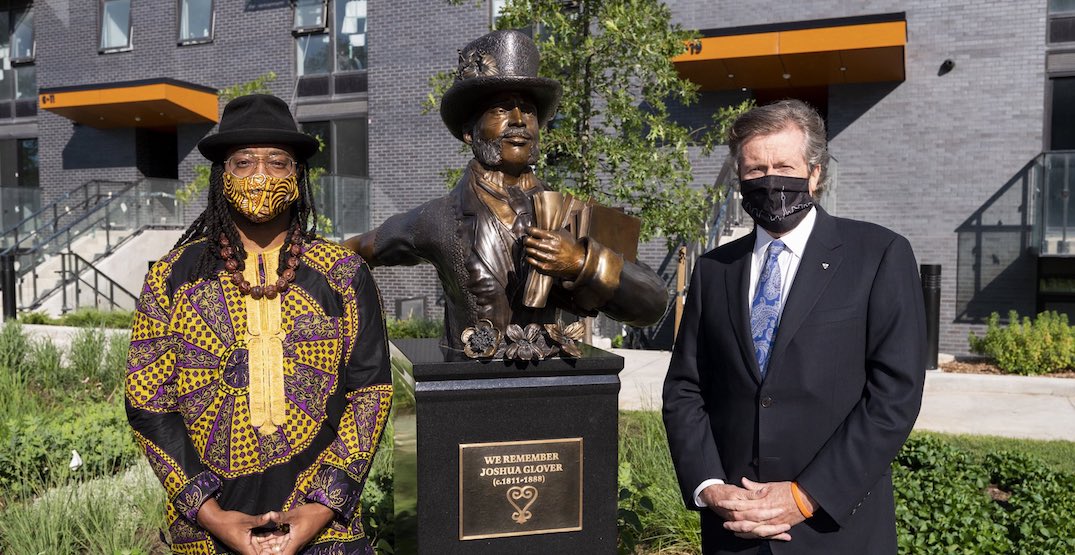 The City of Toronto unveiled a new piece of public art on Friday morning: a statue of abolitionist figure Joshua Glover.

“I want to thank everyone who has worked together to commemorate abolitionist figure Joshua Glover here in Etobicoke,” said Mayor John Tory. “The City of Toronto is committed to making the cultural and economic investments necessary to address anti-Black racism and discrimination in all forms. The celebration of Black residents’ stories and positive impact on our communities is just one action we are taking to build a more inclusive Toronto.”

In 1854, Joshua Glover escaped slavery in the United States via the Underground Railroad and made his way to Ontario. He eventually settled in Etobicoke, where he was just one of a few dozen Black residents. Although his life in Canada was by no means easy, he became well-loved by his community.

The statue, which VerCetty created through a lens of Afrofuturism, shows the Victorian gentleman gazing confidently ahead while throwing away the chains of slavery with a mutilated cyborg arm.

“My scholarly work has focused on the lack of Canadian monuments celebrating people of African descent, so the creation of the Joshua Glover Public Art memorial was an incredible opportunity to personally contribute to beginning to rectify that absence,” VerCetty said.

“It was an even more significant experience as someone born and raised in Rexdale, Etobicoke to contribute to this change in my own community.”