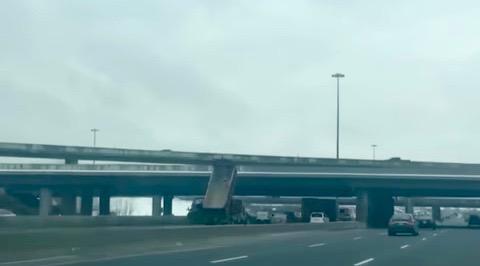 Toronto police have confirmed that a 22-year-old Hamilton man has been charged with careless driving and over height after he crashed the bed of his transport truck into a 401 overpass yesterday afternoon.

22 year old man from Hamilton Ontario charges with Careless driving and Over height – HTA as a result of this collision on #Hwy401 https://t.co/ltEvMXnSPg

The scary scene was captured on video, showing the transport truck speeding down the major highway with its cargo bed raised before smashing into an overpass. No one has been reported injured, but the incident caused significant traffic delays along the 401.