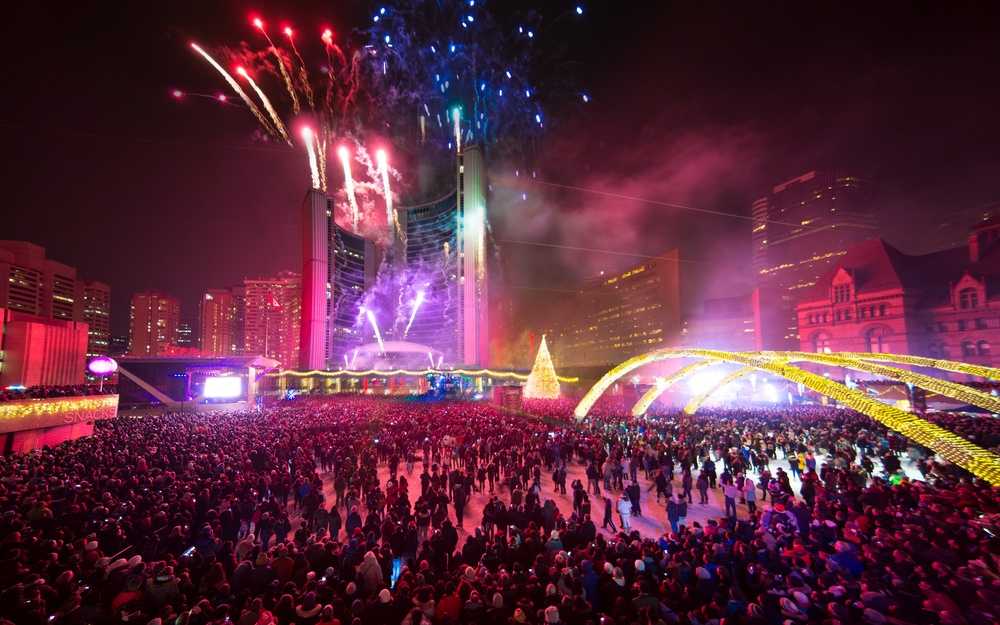 It’s officially the countdown to the end of 2016. And to make sure you end it right, there are plenty of events going on in Toronto, so check some out.

Have a great New Year, Toronto!

Opera on Screen features the world’s most celebrated operas! Today, Jacques Offenbach’s masterpiece of whimsy and imagination comes to life like never before in this sumptuous production from Academy Award winner John Schlesinger and The Royal Opera.

Enter a world where adventure is awaiting and courage leads the way at Disney On Ice presents Dream Big. Through enchanted pixie-dust, Tinker Bell takes you on a journey of beloved Disney tales LIVE ON ICE. High-flying jumps, daring acrobatics, breathtaking skating and lovable Disney friends make this an experience your family will never forget.

Where: Rogers Centre, 1 Blue Jays Way
When: Now until January 1

E.T. The Extra-Terrestrial in Concert

Experience all the mystery and fun of this unforgettable adventure in the beloved movie that captivated audiences around the world, complete with John Williams’ Academy Award-winning score performed live by a full symphony orchestra in sync with the film projected on a huge HD screen!

Where: Sony Centre for the Performing Arts, 1 Front Street East
When: December 30 at 7:30 pm

A Glow in the Dark Paint Party

Paint, Drink, Create the night away with DJ REC and DJ GadJet spinning live with 90’s R&B and House music. A little something for everyone!

“Let’s do the Time Warp Again!” The cult classic The Rocky Horror Picture Show returns for its monthly screening. As always, we’ll be presenting the film with Toronto’s own Shadow Cast who will be performing their own satirical, comedic version of the film for audiences during the show.

Not A New Years Eve Party

No cover charges, line ups, noisemakers or champagne! Just some of the best beers available from local breweries.

Where: Lansdowne Brewery, 303 Lansdowne Street
When: December 31 at 4 pm

Empire Comedy Live presents a fun ensemble stand up show to help you close out 2016 on a high note.

Don’t feel like hitting a bar but still want to ring in the new year with fellow Torontonians? Head to the heart of downtown Toronto and celebrate the New Year at Nathan Phillips Square. Guests can enjoy live music, skating, fireworks, and plenty of fun. Check out the full details for the evening here!

Count down to the New Year with the whole family at DJ Skate Nights: A NYE Ice Skating Jam Named Saturdays, as DJ P-Plus serves up the hottest hits.

3HO Toronto, Lotus Yoga Centre, & the Toronto Kundalini Yoga Teachers invite you to join this New Year’s Eve at The Ashram in celebration of the coming year of 2017. Come expand your blissful spirit with community. There will be yoga, dancing, and food.

For one night only, Toronto’s Gladstone Hotel will transform into the exotic dreamland of the Moulin Rouge, complete with live music, burlesque performances, and a champagne toast at midnight.

Retro NYE with The Dreamboats

The fabulous Dreamboats return for another new years eve party to keep you dancing while serving $4 Sparkling to quench your thirst. Playing all of your favourite retro pop and rock tunes ALL NIGHT LONG!

This party is for you if you don’t want to line up outside a club for hours and slip the bouncer $40 to get in but you also don’t want to slug beers in your friend’s basement all night. Unpretentious New Year’s is your chance to turn up for cheap. Dress however you want. Bring whoever you want. Arrive whenever you want. FREE entry.

Boat your way into the new year. Join the Stella Borealis Cruise Ship and have a unique experience like no other. With multiple cash bars, a live DJ, and music on two enclosed and heated yacht’s decks, this event will be just the way to do something truly exciting and utterly unique this coming holiday.

Where: Stella Borealis, 333 Lakeshore Blvd East
When: December 31 at 9 pm

Ring in the new year at a gig! If you’re a Horseshoe Tavern regular, you’re sure to see some familiar faces at this annual New Year’s Eve soiree with Toronto’s The Sadies.

Where: The Horseshoe Tavern, 370 Queen Street West
When: December 31 at 9 pm

Cheers to a hassle-free New Year’s Eve! Dance the night away with local favourites “The Clearing”, enjoy a beer paired dinner menu, and say goodbye to a bleak 2016 with sparkling wine at midnight.No cover, no tickets, but reservations are needed so check out the event for details.

Ring in the New Year with #ROMNYE, and dance the night away while enjoying delectable bites, and drinks. Celebrate with special access to our spectacular exhibition CHIHULY, live bands, DJs, and, of course, a sparkling toast at midnight.

Where: Royal Ontario Museum, 100 Queens Park
When: December 31 at 9 pm

The fifth annual Dude’s New Year’s event featuring The Big Lebowski is back! The Dude, Walter, Donny and the gang are back for another round of White Russians, Creedence and unforgettable hijinks. Hundreds of “Little Achievers” will ring in the New Year in style (sunglasses and bathrobes recommended).

90’s lovers rejoice: It’s time to take a walk down memory lane and get nostalgic as Back In The Day NYE will be paying tribute to Old School Hip Hop, R&B, Dance, House, Reggae, & Pop from the 90’s.

Run or walk in the cool Liberty Village neighbourhood with super views of the Toronto Skyline. Accurate chip timed 5k, $10 Winter Gloves or Toque with Every Registration, Post Race Food, on course fireworks, $30 swag bag, stylish and unique finishers’ medal. Free glass of bubbly or Steam Whistle Beer to all finishers to celebrate your race and of course the New Year.

Where: Liberty Village, King Street West
When: December 31 at 10:30 pm

Hair of the Dog Fun Run

The annual Hair of the Dog Fun Run is hosted each year by the Balmy Beach Canoe Club. Runners head out on a 9k run or 3k walk along the lake, usually ending with a post race hot lunch!

The annual Toronto Polar Bear Dip tradition returns in support of Habitat for Humanity. Since 2005, the Toronto Polar Bear Club has raised almost $370,000 – funds that have gone directly to build projects in the Greater Toronto Area. Get ready to try this rare hangover cure.

Where: Sunnyside Beach
When: January 1 at noon

What a perfect way to start off the New Year of 2017 & set a clear intention for your self-care. This is also an opportunity for Leslieville Yoga to thank students for their loyalty and support and invite new students to the studio and their amazing yoga community.

Where: Leslieville Yoga, 241 Leslie Street
When: January 1 at 2 pm

Hangover on New Year’s Day? Spend it watching this year’s NHL Centennial Classic game! If you can’t make it to the actual game, watch it indoors and join the fun cheering on the Toronto Maple Leafs as they take on the Detroit Red Wings.