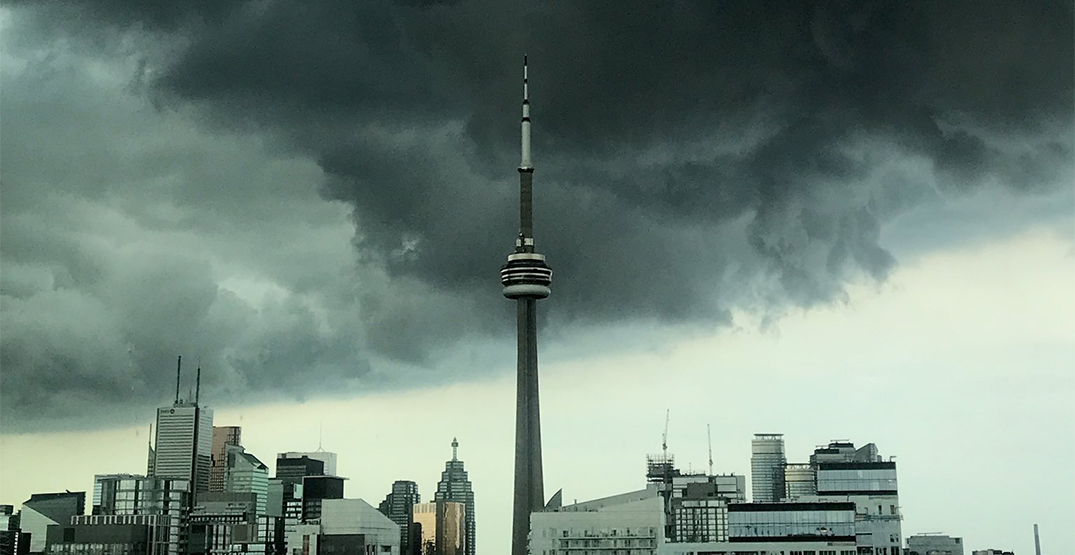 Toronto got a double dose of summer weather Tuesday afternoon, with heavy rain followed by a booming thunderstorm that caused flooding and other damage around the city.

The clouds first rolled in Tuesday afternoon, painting an ominous picture against the Toronto skyline.

Lightning struck the CN tower, which some downtown residents captured on video.

The thunder was also pretty loud, as captured by this worker at an Oakville site.

In The Beaches, the rain brought localized flooding to some streets making it hard for drivers to navigate the huge puddles.

Flooding also occurred near Mount Pleasant and Eglinton due to clogged drains, according to one local resident.

Hi @311Toronto
Sidewalks and portion of road at Mount Pleasant Road and Broadway Ave are flooded. Impossible to cross the street safely. Drains are plugged. Has been reported in the past. pic.twitter.com/jm3DtyXgo0

Just outside of Toronto, residents in Kitchener-Waterloo shared photos of huge trees that came down during the storm.

The City of Toronto is reminding residents to call 311 if they see downed trees, branches, or power lines. Downed power lines should never be touched, as there may still be electricity running through them.

Help us clean up after this storm. Call 311 if you see any downed trees, branches or power lines. #ONstorm pic.twitter.com/GuS9dpkDJ1