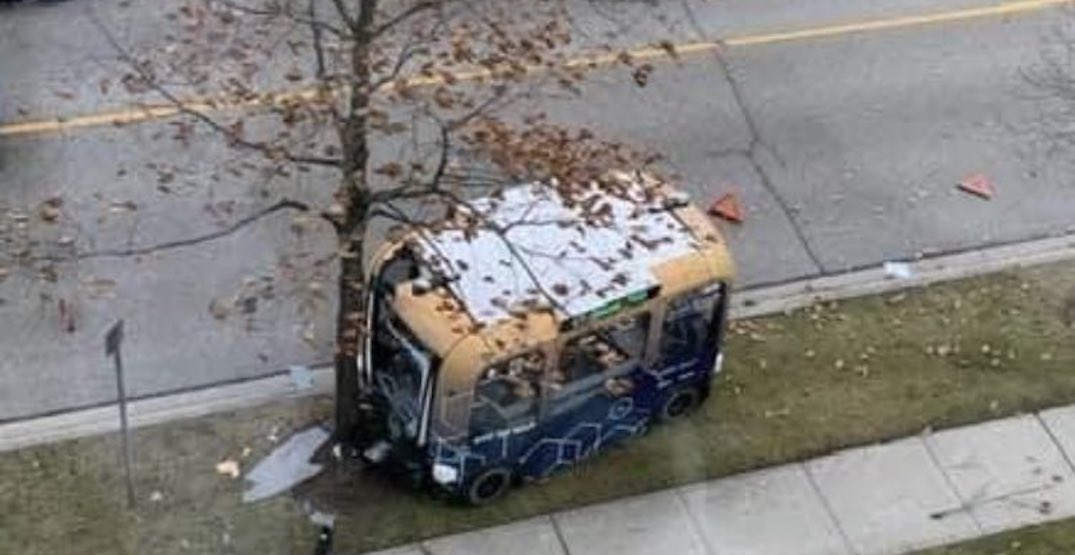 A self-driving shuttle bus in Whitby crashed into a tree on Thursday, critically injuring the 23-year-old onboard attendant.

The autonomous bus drove head-on into a tree near Victoria Street west and Watson Street West around 3:50 pm on Thursday, Durham Regional Police said. As of Friday morning, it was not clear how the bus had left the roadway.

The male onboard safety attendant, who was the only person on the bus at the time, suffered critical injuries and was transported to a Toronto-area trauma centre, police say.

A 23-year-old male safety attendant was injured after a collision involving an autonomous bus in Whitby on Thursday afternoon. He was taken to a trauma centre in Toronto.

The Durham Regional Police Collision Investigation Unit is currently conducting an investigation into the crash, and anyone with information about the incident is asked to contact the Traffic Services Branch at 905-579-1520.

Autonomous bus has crashed into a tree in Whitby!

The Whitby Autonomous Vehicle Electric (WAVE) opened up to passengers in November after undergoing weeks of testing, marking the first time in Canada that a self-driving bus was fully integrated into an existing transit service.

The small, battery-powered shuttle bus travelled a six-km route beginning and ending at the Whitby GO Station. Interestingly, the WAVE maxes out at 20 km/h while in autonomous mode, but the onboard attendant can take over manually if necessary.

The new autonomous bus in Whitby has somehow lost control hitting a tree. Injuries are not know at this time @DRPS collision investigation unit is on the way. Watson is closed at this time pic.twitter.com/hh49ZHThta

The bus’s operator, Durham Region Transit, had no further details on the crash as of Friday morning.

“We were saddened to hear about this disturbing event and are deeply concerned for the attendant, who was taken to hospital. Our focus, at this time, continues to be on the well-being of the individual,” a statement from Durham Region Transit reads.

“Circumstances around the cause of the collision are not yet known, and the incident is being investigated by police. While details are under investigation, we can confirm the shuttle was not in service and no passengers were on board at the time.”

Metrolinx, who funded the self-driving bus pilot, says they will continue to follow the investigation to ensure future safety.

“We understand the operator was injured, and we extend our best wishes to him for a speedy recovery,” Metrolinx said in a statement to Daily Hive. “As a funding partner, Metrolinx will be monitoring the investigation closely as safety is critical.”

Another self-driving shuttle bus from the City of Toronto, the TTC, and Metrolinx, is currently undergoing testing in Toronto’s West Rouge neighbourhood.