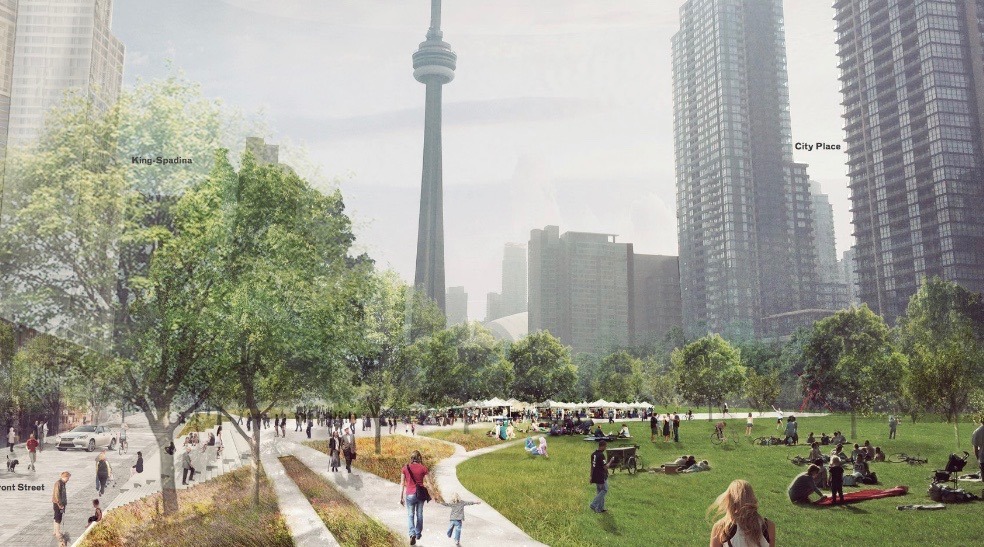 So said John Tory in a live announcement on his Facebook account today as he let the city of Toronto know plans are underway for a huge addition to our downtown parks and green spaces.

Today, we reimagine the rail corridor as an iconic Toronto park. #RailDeckPark pic.twitter.com/jASN15PcUU

The name comes from the fact that the park will run over the railway tracks from the Rogers Centre to Bathurst.

If you’re looking for an apt comparison, it’s like lifting up Christie Pitts and laying it down on the west side of the CN Tower.

Now you’re starting to see why this is such a big deal.

The idea, according to Mayor Tory, is to “create a seamless connection from our downtown to waterfront, a green oasis in TO.”

While this is what a release from the City of Toronto had to say:

The population of downtown Toronto has the potential to nearly double to 475,000 people by 2041. This population growth is propelled by people choosing to live downtown, a part of the city that currently has one of the lowest levels of parkland compared to other areas in the City that have not seen the rate of growth that the downtown has and will continue to experience.

At this point, the City of Toronto has simply announced its intention to protect the land “for the future development of an iconic city park called Rail Deck Park.” But you can bet you don’t make this kind of announcement if things aren’t already moving behind the scenes.

Decking over the rail lands will create a seamless connection from our downtown to waterfront, a green oasis in TO. pic.twitter.com/erN5TYzyMI