It’s the weather update we’ve been waiting all winter for: the lingering freezing temperatures are finally coming to an end.

But before the warmer temperatures arrive, a “significant spring-like storm” is expected to track through the region this weekend, according to The Weather Network.

As we head toward the end of the work week, the frigid northwestern winds we’ve been experiencing will taper off on Thursday, as an area of high pressure settles into the province.

Friday will end on a balmy note, as a high of -1°C is expected along with a mix of sun and clouds.

While above freezing temperatures are on the forecast for this weekend, a Colorado Low will make its way into the region late Saturday night.

Rain is expected to be dominant across much of southern Ontario when the system moves in, although many areas near and north of the 407 may be hit with freezing drizzle overnight, according to The Weather Network.

“And for areas north and northeast of Toronto, the precipitation could begin as a period of snow before changing to rain,” adds Weather Network meteorologist Michael Carter.

Periods of snow is also expected, and cottage country could see as much as 15 cm of snow. 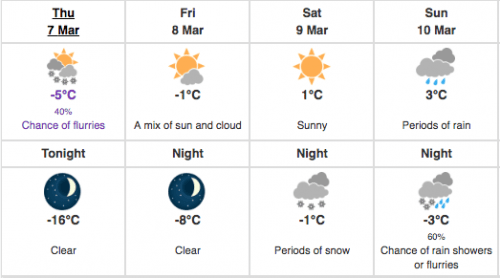 The warm front will linger into Sunday, which means the weekend will end on a mild-ish note for most of the province and an abrupt end to the initial risk for snow and ice for most.

However, the warming temperatures and forecasted rain on Sunday could result in some localized flooding.

Homeowners are urged to clear any storm drains or catch basins ahead of the weekend system.