Earlier this week, the forecast showed Toronto could get up to 10 cm of snow over the weekend.

And that number has since gone up.

As we edge closer to Saturday, it looks like Toronto is now expecting up to 15 cm of snow.

According to The Weather Network, while it will be 2°C on Saturday, it will be a snowy one.

“This system will bring 10-15+ cm of snow to much of southern Ontario, including the 401 corridor,” said Weather Network meteorologist Dr. Doug Gillham. “We will also have a strong and gusty southeast wind which will cause extensive blowing and drifting snow.”

While some regions will see over 15 cm of snow, Toronto is expected to be milder, which will change some of the snowfall into rain.

But, The Weather Network said, “more snow than rain is expected.” 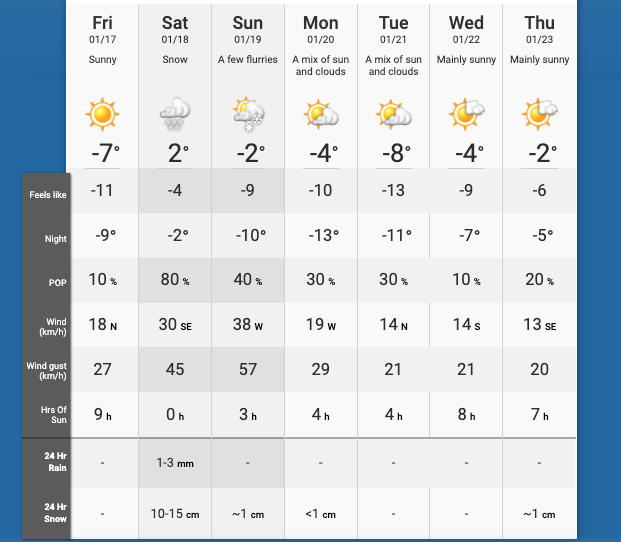 But before the snow, there will be a blast of cold.

The Weather Network said that by Friday, “southern Ontario will be home to the coldest air we’ve seen so far in 2020.”

The City of Toronto has issued an Extreme Cold Weather Alert on Thursday in anticipation of colder weather conditions within the next 24 hours.

The Extreme Cold Weather Alert will be in effect until further notice.