While it looks like winter decided to skip Toronto and hit Vancouver instead, that will be changing this weekend.

According to The Weather Network, by Friday, “southern Ontario will be home to the coldest air we’ve seen so far in 2020.”

It forecasts the daytime highs at close to -10°C in Toronto, leading into a warmer Saturday, but a system that will bring almost 10 cm of snow into the city will be arriving.

“This system will bring 10-15+ cm of snow to much of southern Ontario, including the 401 corridor,” said Weather Network meteorologist Dr. Doug Gillham. “We will also have a strong and gusty southeast wind which will cause extensive blowing and drifting snow.”

While some regions will see over 15 cm of snow, Toronto is expected to be milder, which will change some of the snowfall into rain.

But, The Weather Network said, “more snow than rain is expected.” 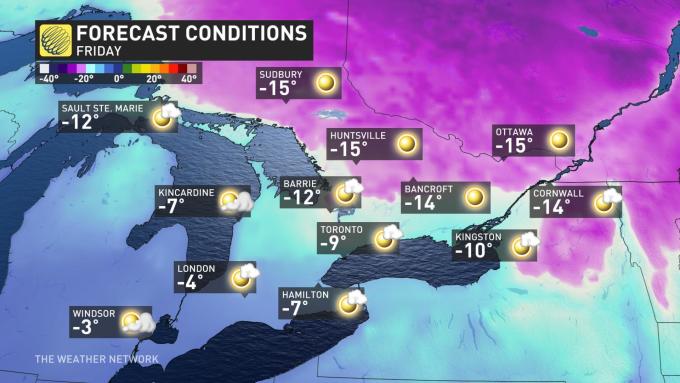 Heading into Sunday, there will be arctic air in the region, “with some of the coldest weather that we’ve seen so far this winter expected for the early parts of next week.”

The weather agency said that this could be the start of the area’s “typical” winter weather for January.

According to the long term forecast, Monday will be -9°C, but will feel more like -16°C. That is during the day.

The night temperatures will drop to -16°C, without wind chill values.

This pattern continues through the start of next week, and by Wednesday it will go up to -10°C with wind chill.

Expect the City of Toronto to issue cold weather alerts during those days. 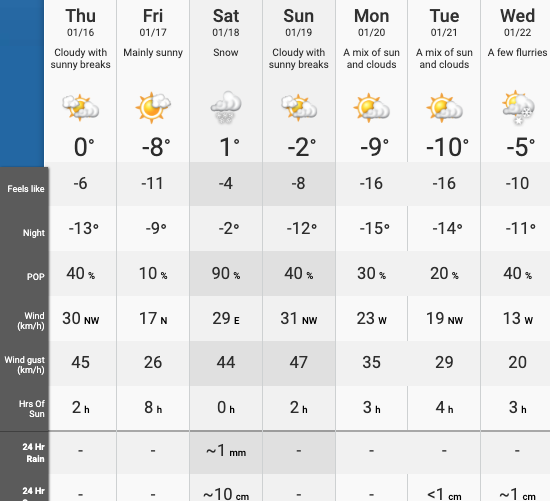