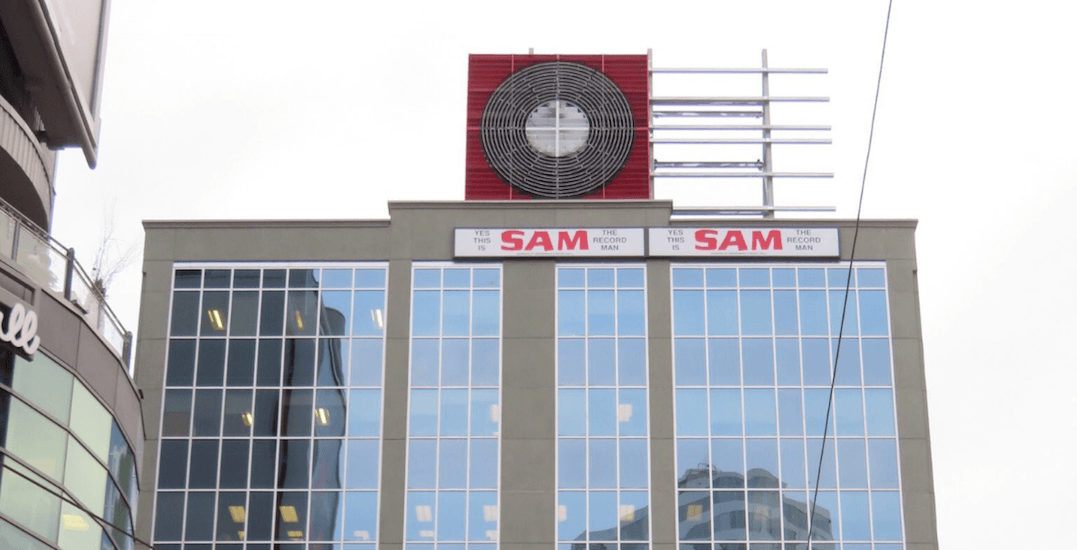 The iconic Sam the Record Man sign will soon be glowing in all its glory again.

From photos shared by excited spectators, you can see that crews have lifted one of the sign’s two enormous spinning discs into place as well as two other pieces of the sign that says “Sam the Record Man”.

For nearly 40 years, the sign adorned the front of the famous Yonge Street record store, which served as the place to be for music fans in Toronto.

However, the sign was taken down in 2008 when Ryerson University acquired the property. But thankfully, the Ryerson announced that it would restore and re-install the iconic Sam the Record Man sign for its new location, near Yonge-Dundas Square.

So if you’re near Yonge-Dundas Square this weekend, make sure to look up!

I was lucky enough to stumble upon this last night.

Happening now: the return of the Sam the Record Man sign to Toronto, corner of Yonge & Victoria pic.twitter.com/IgXi56xQNP

Crane is here! It will be an exciting weekend at @YongeDundasSq as we watch the SAM the Record Man sign go up.#YDSQUARE pic.twitter.com/e18np3ZJD6

The Sam The Record Man sign is going up on 277 Victoria Street. Another neon spinning disc has yet to go up. pic.twitter.com/ZJc5D2xAak