Another month, and another strong end for Toronto’s real estate market.

Mostly for the sellers.

The Toronto Real Estate Board (TREB) released its February report, stating that the average selling price for homes in the GTA was $875,983, which is up by 27.7% compared to last February.

The price growth continued to be for low-rise type homes, such as detached houses, but growth rates for condominium apartment prices were also in rising, likely due to a strong demand from first-time buyers, according to TREB.

And as the story goes in our local real estate market, while the demand for ownership housing grew over the past year, new listings in February were down by 12.5% compared to a year ago.

Meanwhile, the average price for a detached home soared to over $1 million, with an average of over $1.5 million in the Toronto area. 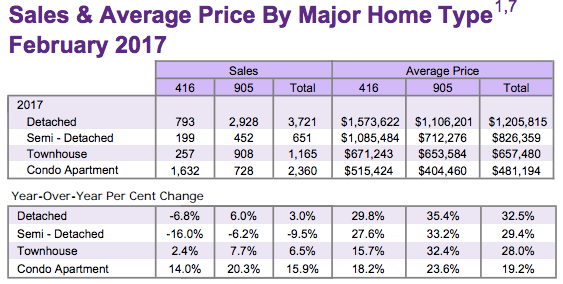 “The listing supply crunch we are experiencing in the GTA has undoubtedly led to the double digit home price increases we are now experiencing on a sustained basis, both in the low-rise and high-rise market segments,” said Jason Mercer, TREB’s Director of Market Analysis, in a press release.

“Until we see a marked increase in the number of homes available for sale, expect very strong annual rates of price growth to continue,” said Mercer.

It looks like there is no cooling down of this hot real estate streak anytime soon.