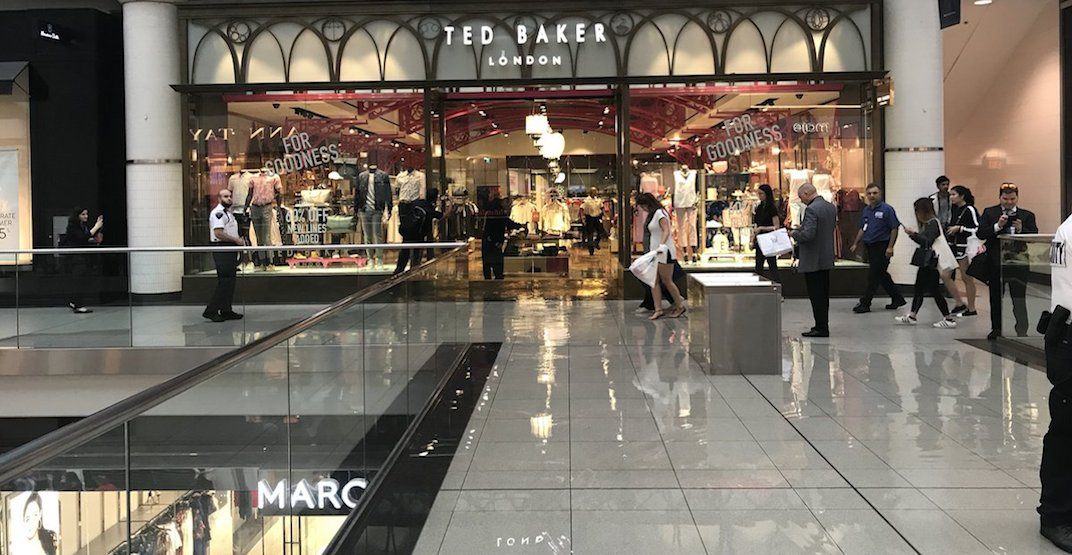 Wednesday’s severe storm may have been brief, but it definitely caused a lot of damage.

From knocking down trees and leaving 16,500 people without power to causing damage to residential homes and buildings, Mother Nature was a force to be reckoned with.

One downtown building that really felt the effects of the storm was the CF Toronto Eaton Centre, as the rain began pouring from the ceiling at the height of the storm, causing quite the mess for shoppers and retail workers.

As water began flowing from the ceiling and falling from the light fixtures, social media literally became flooded with pictures and videos of the chaotic shopping centre.

One person tweeted “Rain is on every floor of the Eaton Centre,” as water can be seen pooling in front of stores on the second level.

Rain is on EVERY FLOOR of the eaton Center ! #onstorm pic.twitter.com/M4KjG6VE0N

A spokesperson from Cadillac Fairview told Daily Hive Toronto that at approximately 4:30 pm on Wednesday there was a water leak that started on Level 3 on the south east of the shopping centre, which then impacted Levels 2 and 1 in the same area.

“To the best of our knowledge, the leak was brought on as a result of the rainfall,” said the spokesperson.

The property team detected the source of the leak and closed off the impacted areas in order to ensure the safety of mall tenants, guests and staff.

In photos and videos circulating online, security guards can be seen blocking off flooded areas of the mall and setting up large garbage bins to collect the rainfall.

In case you missed yesterday’s storm, here are some of the top shots circulating on social media from the Eaton Centre.

Serious flooding at Eaton Centre today as water came pouring through the roof at Ted Baker during the rainstorm. Apparently some pipes burst pic.twitter.com/glvNaN8cSS

The shopping mall is operational today with the exception of Ted Baker.