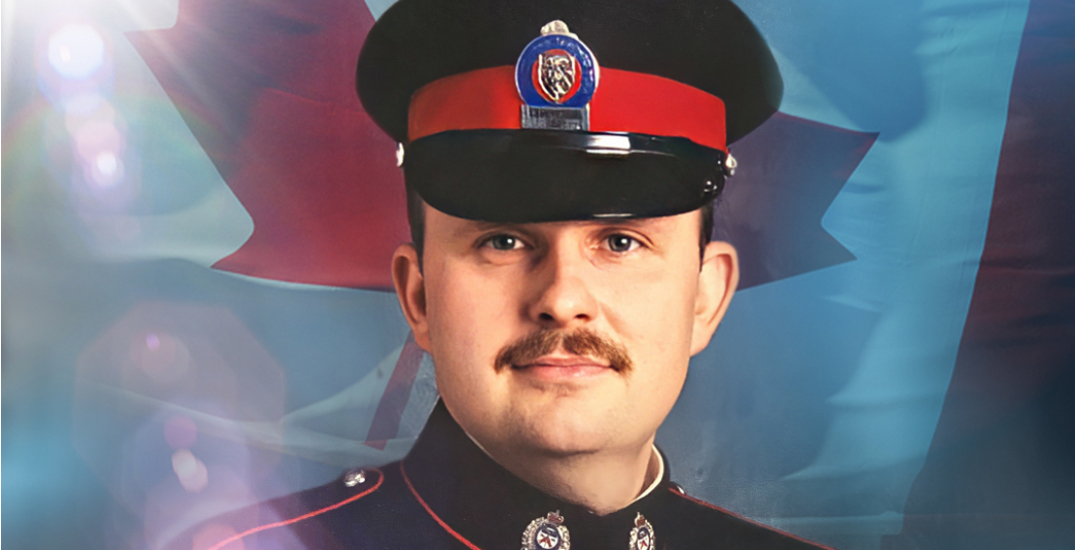 The funeral service for Toronto Police Constable Jeffrey Northrup is being held at BMO Field today.

The funeral procession will travel from the Thornhill funeral home to Exhibition Place, with the service set to begin at 1 pm.

As the procession arrives at Lake Shore Boulevard West and Ontario Drive, officers will march east along Lake Shore, turn left on Canada Boulevard, and then proceed onto Princes’ Boulevard.

Toronto Police Service members will be positioned on both sides of Princes’ Boulevard to honour the funeral cortege as it passes through.

Chief James Ramer will salute the cortege before it continues to Gate 5 of BMO Field for the ceremony, where Northrup’s family will be waiting.

The westbound lanes of Lake Shore Boulevard West will be closed from Fort York Boulevard to British Columbia Road.

Strachan Avenue will be shut from Fleet Street to Lake Shore Boulevard West. Other traffic control measures will be in effect to manage the flow of traffic in the area.

The funeral service is expected to conclude by 2:30 pm, although police note time is subject to change.

At the end of the ceremony, 52 Division will leave the stadium through Gate 5 and form an Honour Guard, through which the cortege will exit.

Chief Ramer will conduct a final salute, and the cortege will head west through the Exhibition grounds.

Members of the public can view the funeral procession and service on the Toronto Police Service’s YouTube channel.

Anyone choosing to observe the procession in person is asked to practice physical distancing, wear a mask, and complete a COVID-19 screening form.

Northrup was “intentionally” killed while responding to a call in the early hours of July 2.

While he and his partner were investigating a parking garage near Queen Street West and Bay Street, Northrup was “deliberately” struck by a vehicle.

A 31-year-old man has been charged with first-degree murder in Northrup’s death.