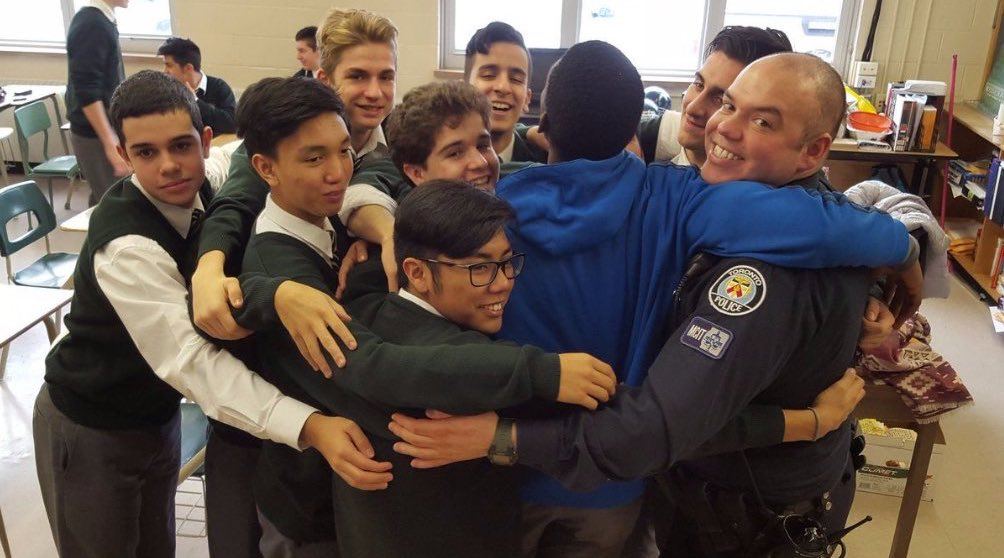 The School Resource Officer program may be coming to an end.

Since 2008, Toronto schools have worked with Toronto Police to provide officers at 66 schools. And now, the program is up for debate at the Toronto Police Services Board meeting on Thursday.

According to Toronto Police, the School Resource Officer (SRO) Program is a partnership between all the Toronto school districts to establish and maintain a healthy and safe school community. The program is in place at schools that request the officers, and there are currently 36 officers assigned to the 66 schools.

But recent review and board discussion of the program saw member Ken Jeffers submitting a motion to “immediately suspend” the program pending a meeting/consultation with stakeholders.

And Jeffers, who is the Toronto District School Board’s Gender-Based Violence Prevention Coordinator, is not alone when it comes to wanting the program dissolved.

Education Not Incarceration and Black Lives Matter began a petition to have the program removed from schools. They say that the police program targets marginalized youth.

“… in each one of those schools our most marginalized youth—our Black, Indigenous, racialized, and undocumented children and youth —are forced to learn while under the surveillance of the very people who target them with violence and harassment in our communities,” they state.

The Jane Finch Action Against Poverty (JFAAP) is also calling on the Toronto Police Service Board members to vote to immediately end the program.

“Our community has opposed the presence of police officers in schools from the very beginning,” said JFAAP in a statement. “Throughout the years we have had the highest incidents of criminalization of residents, mostly black, racialized and poor youth. Our community and other communities affected by the SRO “program” have the largest proportion of low income households, high levels of poverty and unemployment, and one of the highest proportions of racialized people and immigrants in Toronto.”

Meanwhile, Toronto Police say that over the years, there have been various programs that these officers have initiated in their school communities.

“Seems like the only ones that don’t want officers in schools are the ones that don’t even work in the schools,” wrote officer Ryan Willmer, who began using the hashtag #KeepCopsInSchools to show the positive work they have done.

Show your support to #KeepCopsInSchools by Sharing your stories and #photos of your experiences with #School Resource #Officers pic.twitter.com/Am8Q0lVqws

Several officers have responded to Willmer, sharing photos of events they have attended at their schools.

Worked for many years as a school cop in downtown Toronto~Can honestly say believe together we stopped school shootings #KeepCopsInSchools pic.twitter.com/712l8NywwB

But for others, like Education Not Incarceration and Black Lives Matter, the time has come to end the program.

Today’s board meeting takes place at the Toronto Police Headquarters at 1 pm, and groups are expected to attend to oppose the program’s continuation.