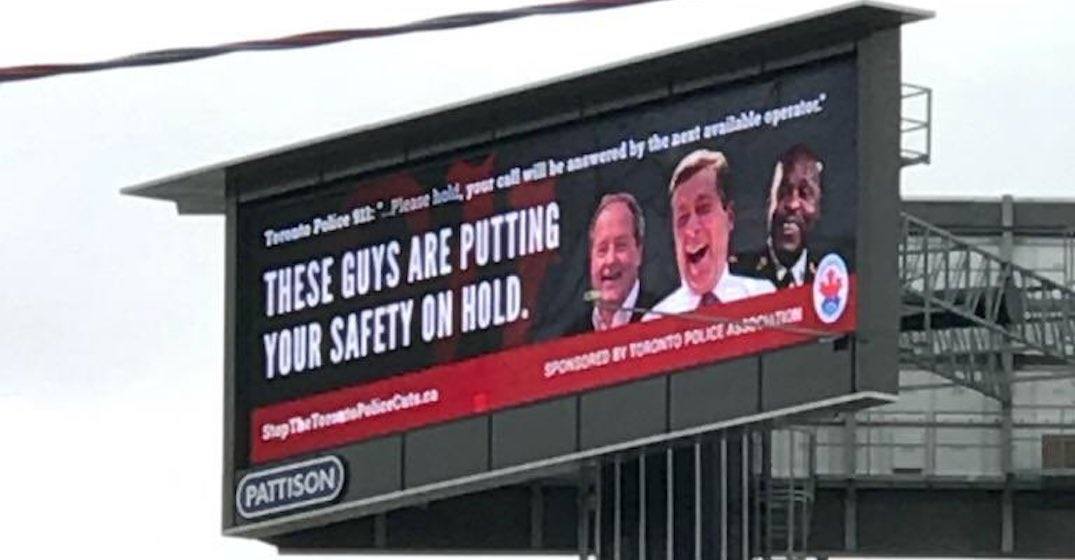 First it was Drake. Now, the Toronto Police Association is using a billboard along the Gardiner Expressway to publicly attack Mayor John Tory.

The billboard shows a laughing Tory, along with Police Chief Mark Saunders and Toronto Police Services Board Chair Andrew Pringle, and it reads, “These guys are putting your safety on hold.”

In a tweet, Toronto Police Association President Mike McCormack said that Tory is “so proud of the City’s record tourism numbers. This week 1 million commuters and visitors on the Gardiner just west of the downtown will see exactly who is responsible for increased 911 wait times.”

The Association’s billboard comes a week after their full page ad in a local newspaper, similarly blaming Tory for the wait times residents have faced when calling 911.

“Toronto Police are facing an alarming series of cuts that affect police staffing. These cuts continue to weaken Toronto police officers’ ability to keep the city safe, engage proactively with the community and deliver policing to parts of the city where it matters most,” reads the Association’s website.

“You can throw your support behind Toronto’s officers by joining us on Facebook and sending a message to Chief Saunders, Mayor John Tory and Toronto Police Services Board Chair Andy Pringle. It’s time for politicians to put public safety ahead of their cost-cutting agendas and reinvest in frontline community policing,” it says.