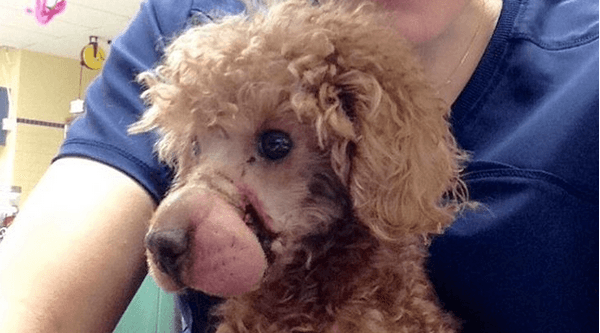 Toronto Animal Services tweeted today that Frankie, the apricot poodle found on Christmas Eve malnourished and with an elastic wrapped around his snout, is doing much better:

Update: Frankie is doing much better and thanks everyone for support. Donate to his care and similar cases: https://t.co/GQWsjfpDUj. pic.twitter.com/kKko3lcnf7

While Frankie is currently recovering in a foster home and is scheduled for surgery to repair tissue damage to his snout, the story doesn’t yet have a happy ending.

The perpetrator of the heartbreaking abuse has yet to be held accountable which has prompted PETA to put up a $5,000 reward for information leading to the arrest and conviction of the person or persons responsible for this crime.

“This terrified little dog was left alone in the cold to die with his mouth bound shut, preventing him from eating or drinking,” says PETA Vice President Colleen O’Brien. “PETA urges anyone with information about this case to come forward immediately so that whoever abused and abandoned him can be held accountable.”

Anyone with information about this case is encouraged to call the Toronto Police Service 42 Division Detectives Office at 416-808-4200.