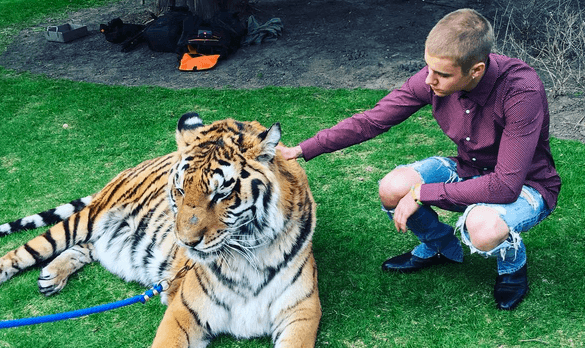 He’s back at it again.

After a posted Instagram photo with a tiger in April, Justin Bieber has now officially received complaint notices from Toronto Animal Services (TAS).

The photo, taken at his dad’s engagement party, showed one of several animals taken from the Bowmanville Zoo. Soon after, People for the Ethical Treatment of Animals (PETA) filed a complaint with the city in regards to the zoo’s exhibition of animals at the event.

But the Biebs did not stop at the tiger photo. Shortly after the initial photo was posted, a photo by Alex Haditaghi showed Beiber carrying a lion cub – and once again, PETA sent a complaint to TAS. In response, TAS recently sent out notices to Bieber, Haditaghi, and the Bowmanbville Zoo.

Under the Toronto Municipal Code, animals prohibited from domestic keeping within the city include felidae – such as tigers.

There has been no word so far from Beiber’s camp. Not even a “sorry.”