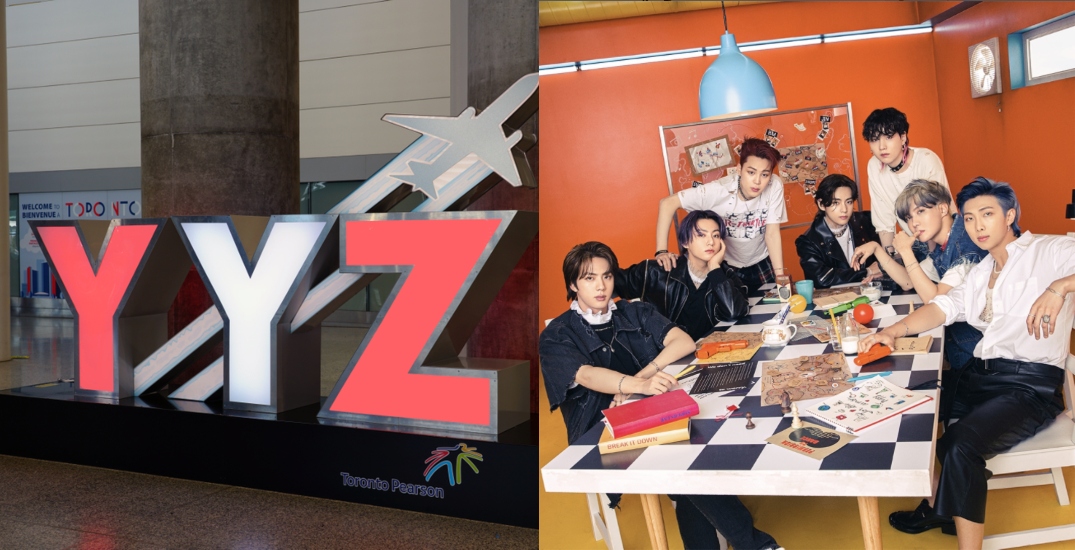 Airports around the world were having a “dynamite” time quoting BTS lyrics, much to the delight of ARMYs, the K-pop group’s fans. However, Toronto Pearson Airport wasn’t partaking in any of it.

It started with an April 25 tweet from Orlando International Airport with a quote from “Moonchild,” a song by BTS member RM:

Then on April 27, Dallas Fort Worth International Airport tweeted a video of an American Airlines plane’s smooth landing with a quote from the BTS song “Butter”:

Airports in Sydney and Paris were quick to jump in with quotes from the group’s 2020 single “Dynamite”:

💜 Day or night, the sky’s alight, so we dance to the break of dawn! #BTSArmy #BTS 💜 pic.twitter.com/5gdACInQZQ

We give you Permission to Dance after that landing! 🕺🏼 💃🏽🕺🏿💃🏼#BTSArmy #BTS https://t.co/iFzfs1KQOy

So did Vancouver International Airport:

Fans were thrilled, and the tweets instantly sparked theories about possible concerts, with Toronto fans tagging Toronto Pearson Airport and asking about a world tour. One fan tweeted: “The fact that I have to ask an airport about BTS’ world tour is freaking weird.”

@TorontoPearson ANY SOURCES OUTSIDE OF TWITTER TALKING ABOUT BTS COMING TO TORONTO OR THE GTA???? the fact I have to ask an airport about BTS’ world tour is freaking weird.

However, the airport’s social media team (probably confused about why they were suddenly being asked about BTS concerts) was quick to put a stop to the rumours, stating, “According to Twitter no concerts are scheduled in Toronto, Hamilton and GTA area. We have no other information to provide at this time.”

According to Twitter no concerts are scheduled in Toronto, Hamilton and GTA area. We have no other information to provide at this time.

Things escalated because, for some reason, even Peel Regional Police got involved.

We’ve confirmed with our confidential informants and can confirm what @TorontoPearson has stated. According to Twitter there are no @BTS_twt/@bts_bighit concerts scheduled at this time in #Toronto or the GTA.

Toronto Pearson’s rather dry response had people poking fun at the airport, with one fan calling them a “killjoy.”

When a group of friends is having fun theres always that one friend who’s a killjoy! Thats our airport 🇨🇦😂 pic.twitter.com/4v9RuIN8vq

Another fan tweeted, “Lol Pearson being so dull! Come on social media person join in the fun!”

Lol Pearson being so dull! Come on social media person join in the fun!

It seems they finally gave in to peer pressure because several hours later, Toronto Pearson did join in, perhaps somewhat reluctantly, with a quote from “Dynamite.”

We’d be in the stars tonight if BTS booked a concert in Toronto too!

You have to at least give them points for trying.

BTS just wrapped up a four-day mini-residency in Las Vegas with their “Permission to Dance” concert. They recently made headlines after announcing their upcoming album We Are Bulletproof, which comes out on June 10.